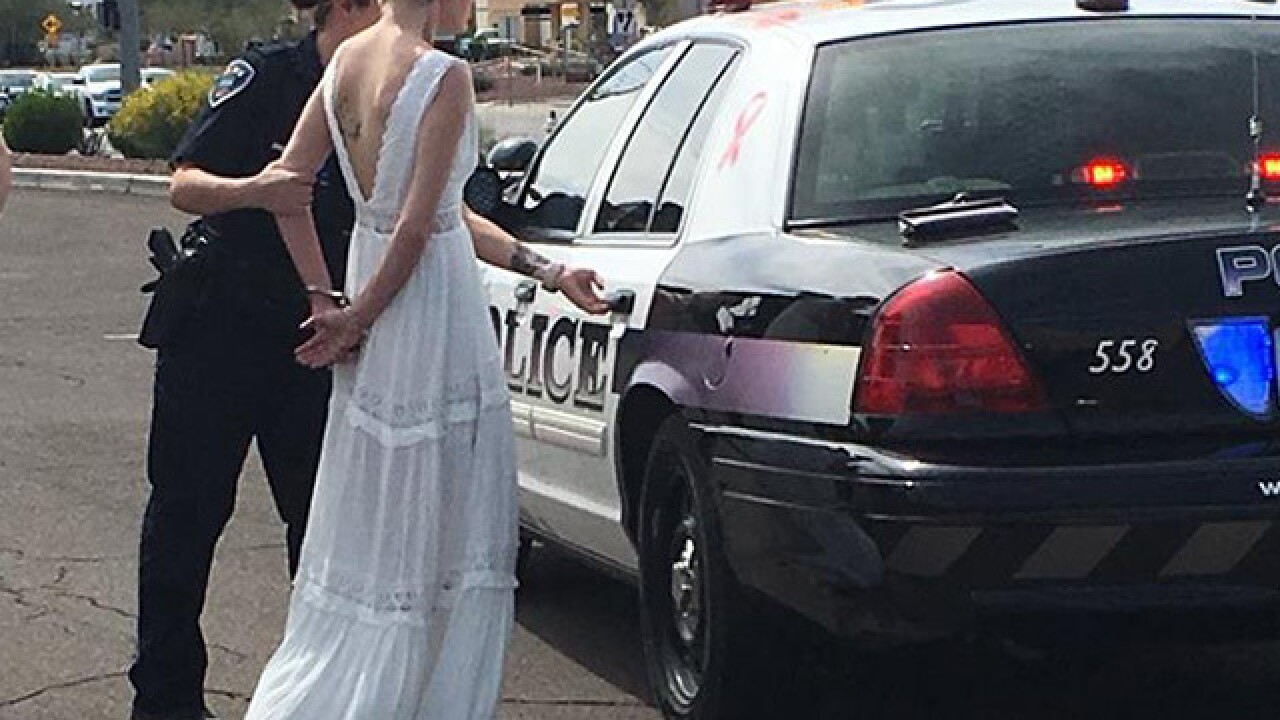 Marana police released the police report of the March 12 DUI arrest of a woman who told police she was on the way to her wedding.

The police tweeted an image of Young getting arrested. MPD has since deleted the photo after users started posting comments and publicly shaming Young.

A lawyer representing the suspect, 32-year-old Amber Young, said the tweet was a hoax. Marana police refuted that accusation.

According to the report, police arrested young at 10:28 a.m. after she was involved in a three-vehicle wreck at the intersection of Orange Grove and Thornydale Roads.

According to a witness quoted in the report, Young was driving a white SUV southbound on Thornydale and swerving back and forth when it hit the median in front of the north entrance on Costco Drive before speeding into the Orange Grove and Thornydale intersection. The SUV dodged a box van before hitting a blue sedan.

Here is an excerpt of the narrative from an officer who responded to the scene:

I observed Amber was very emotional and was explaining that it was her wedding day. Amber explained she was worried about missing it. I noticed Amber's eyes were red and watery. Amber spoke slowly and would not make eye contact. I asked her if she had taken anything or drank anything today. Amber stated she had not drank or taken anything.

Young is scheduled for a pretrial hearing at Marana Municipal Court March 28.

As she was transported to the Marana police Ina substation, Young slipped one of her hands out of the cuffs, spurring the officer to affix smaller cuffs to her.

At the substation, she told officers she had a glass of champagne before taking the wheel, adding that she "did not want to fess up" when asked earlier if she had consumed any alcohol.

Police contacted a man Young identified as her fiance, who picked her up from the substation.

Marana Sergeant Chriswell Scott, says the Department's purpose of tweeting out the photo was to "draw awareness to impaired driving."

Young's attorney, Michelle Behan, says her DUI was "wrongfully claimed" and it was a hoax.

Good afternoon.  The facts of this case should be determined by a jury, duly sworn to be fair and impartial, based on reliable evidence and testimony from witnesses that are subject to rigorous cross-examination.  The police reports that were forwarded to my partner are a mere summary of events that the officer claims to have observed, and do not contain any context regarding questioning on scene that may have occurred.  Ms. Young's ultimate destination remains immaterial to the relevant questions in her case, and the posting of her personal information remains a reckless act by law enforcement officers who did not consider the potential harm to Ms. Young's reputation, dignity, and ability to obtain a fair trial before they sent a tweet that quickly became international news.  There was no reason for it, other than to humiliate her or to create a laugh at her expense.  Like every person who comes into contact with law enforcement, Ms. Young deserved better.

In an earlier statement to KGUN9, attorneys Behan said:

The police officer who arrested Ms. Young for DUI wrongfully claimed on the Marana Police Twitter account that Amber was driving to her wedding and wearing a wedding dress at the time of her DUI arrest. Both facts are false. Ms. Young is not getting married nor is she even engaged. In fact, Amber was on her way to have lunch with a friend. Further, Amber was not wearing a wedding dress: she was wearing her sun dress.

Miss Young and her attorneys are demanding a full and complete retraction by the
Marana Police Department of the untruthful story. Further, Miss Young’s lawyers are demanding that an investigation take place to determine how the police Twitter account was accessed to fabricate the story.

“The only vow that was broken in this matter was when the police failed to ‘serve and protect’ Amber, instead providing her personal information to social media for their own malicious purposes”, said attorney Donald Ramsell. Ms. Young has received numerous negative messages from persons on social media as a result of the police tweet.

“The fact that the police department (who posted the original hoax) removed it as soon as the story became viral proves that they knew that the story was false” said Michelle Behan, Amber Young’s attorney. “We demand that the Marana Police Department apologize for this breach of public trust.” said Behan. “Like every person in America who is alleged to have committed a crime, Ms. Young is absolutely innocent until proven guilty beyond any reasonable doubt,” said Behan. Continuing, “Unfortunately for Ms. Young, the law enforcement officers from the Marana Police Department who arrested her have made this impossible, as Ms. Young’s personal information was posted on social media prior to any information being presented in court.”

Sgt. Scott says they have video footage of the arrest where Young claims she was on her way to her wedding as well as giving details as to where the venue was.

"The body camera footage is not available at this time due to the ongoing criminal case (DUI)," Scott said via email.

In response to allegations from Ms. Young's attorney(s); there is absolutely no basis in fact that we fabricated the story about Ms. Young being on her way to her wedding when she was involved in a three car collision and was subsequently arrested for Driving Under the Influence. Contact with Ms. Young was captured on police body camera. The audio and video captures Ms. Young stating that she is getting married, that it is her wedding day, providing details about her wedding, and affirming she is wearing her wedding dress.