Firefighters from 7 different agencies continue to fight the Sawmill Fire in Green Valley. The call came in on Saturday just before noon. Officials say it began as a small brush fire -- but quickly grew to a much larger wildfire due to wind and dry conditions. By 10:00 p.m., the fire had spread to the Santa Rita Mountains, and officials say the fire had burned more than 2,000 acres.

On Saturday, officials estimated the cost of battling the Sawmill Fire to be about $5.6 million.

Firefighters from at least 20 different agencies continue to fight the human-caused Sawmill Fire that started in the Santa Rita Mountains, Southeast of Green Valley on Sunday.

Border Patrol has confirmed they are investigating an off-duty Tucson agent's involvement in starting the Sawmill Fire.

The agent was involved in recreational shooting and immediately reported the fire after it began according to a release from Border Patrol.

The fire has spread to the Santa Rita Mountains, and officials said Sunday evening the fire burned 46,991 acres and was 94 percent contained.

The Hilton Ranch area has been released from pre-evacuation status Sunday morning.

An outdoor meeting is planned for Sunday at 1:30 p.m. at milepost 41 on Arizona Highway 82 at Rain Valley Loop Road.

The original call came in on Sunday just before noon. Officials say it began as a small brush fire -- but quickly grew to a much larger wildfire due to wind and dry conditions.

The National Interagency Fire Center has provided an interactive map where you can see the course that the Sawmilll Fire has traveled and the acres that have been burned.

The photo below is from 9 p.m. on Wednesday. 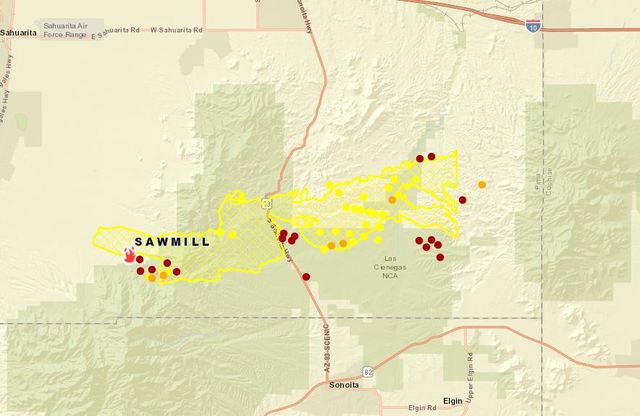 The Southern Arizona Chapter of the American Red Cross has closed the two shelters located at the Sonoita Bible Church at 3174 Highway 83 and the other is at the SE Regional Park Shooting Range at 11296 S. Harrison Road.

The shelter trailer with supplies will remain on site at the shooting range in case there be a need.

According to the Arizona Department of Transportation, State Route 83 has reopened after being closed for nearly 3 days because of the fire.

ADOT said if you drive that road, use caution and look for crews who may be repairing guardrail posts. 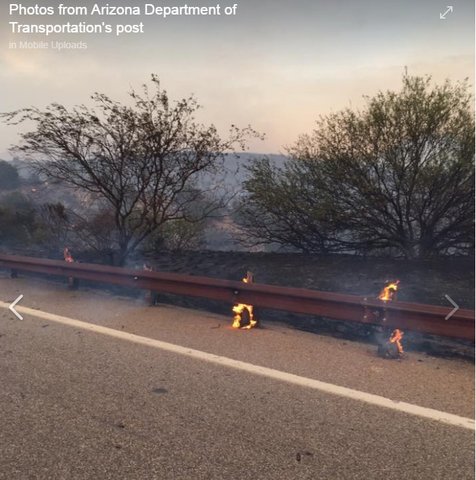 LT Pratt of the Green Valley Fire District explained these conditions created the perfect combination for a fire -- all it needed was a small spark.

"It only takes a cigarette flicked out of a moving vehicle," Pratt said. "Or maybe even a hot vehicle pulling off the side of the road into this dense underbrush that can create a fire."

Burnout operations underway at wildfire near Box Canyon. GV Fire quickly burning brush so it won't jump to other side of road. @kgun9 pic.twitter.com/jcScfJl6xU

More than 782 firefighters on land were working to stop the flames from spreading even more. That number is now down to 617. There are 11 air crafts available for air support.

Unpredictable winds are making it a dangerous task for the crews on scene.

"Especially when we don't know when that wind may change, when it'll shift directions," he said. "We always have to be careful for those firefighters that are on the ground that are in direct contact with the fire line. Wind could change direction, and obviously their safety then becomes critical."

Planes dropping fire retardant on side of the mountain. 150 firefighters working right now. Only about 5% of 1,500 acres contained @kgun9 pic.twitter.com/e2sZCk2sf8

No structures have been damaged as a result of the Sawmill Fire.

RELATED: The Sawmill fire in photos
RELATED: One fire and the story of two ranchers
RELATED: Donations needed for Sawmill firefighters
Copyright 2017 Scripps Media, Inc. All rights reserved. This material may not be published, broadcast, rewritten, or redistributed.