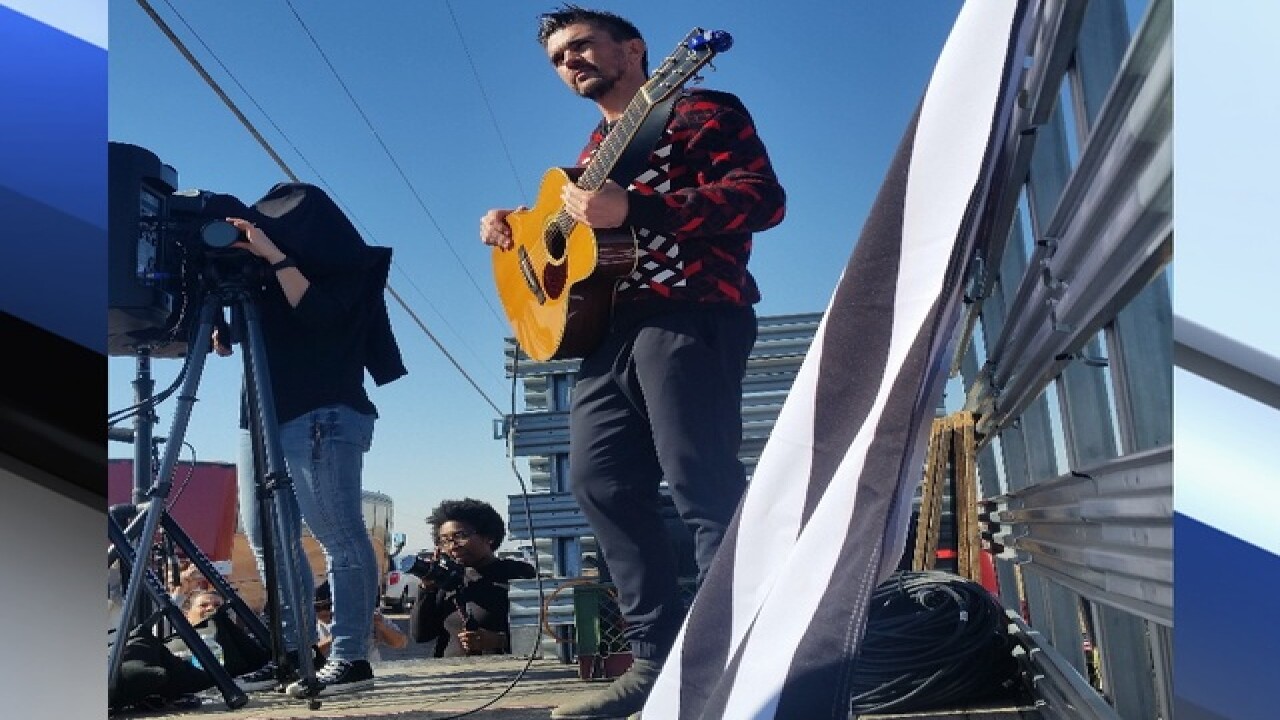 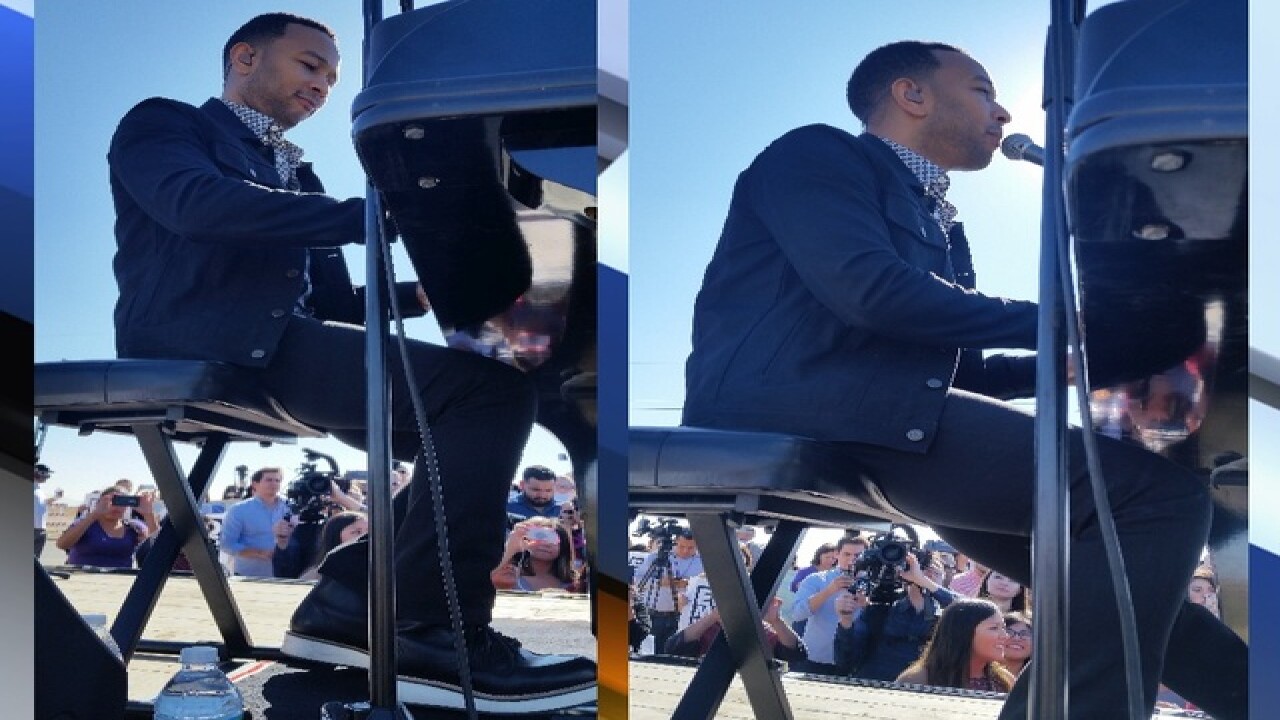 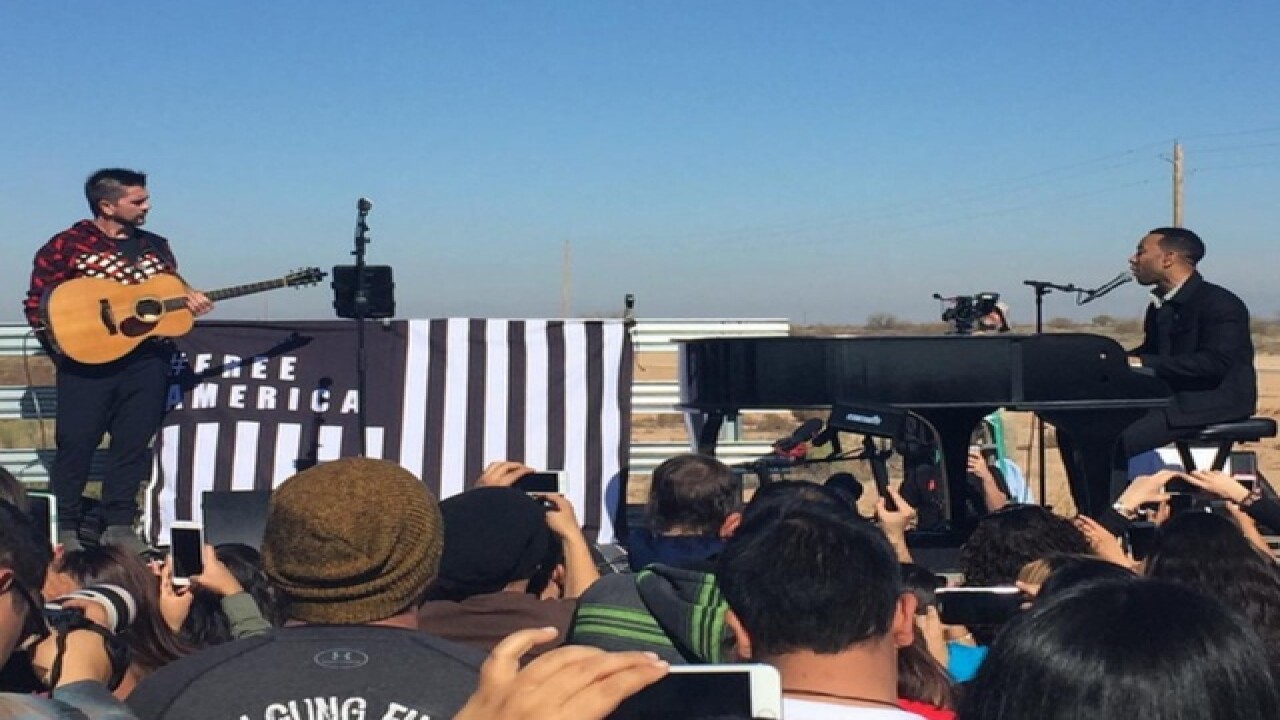 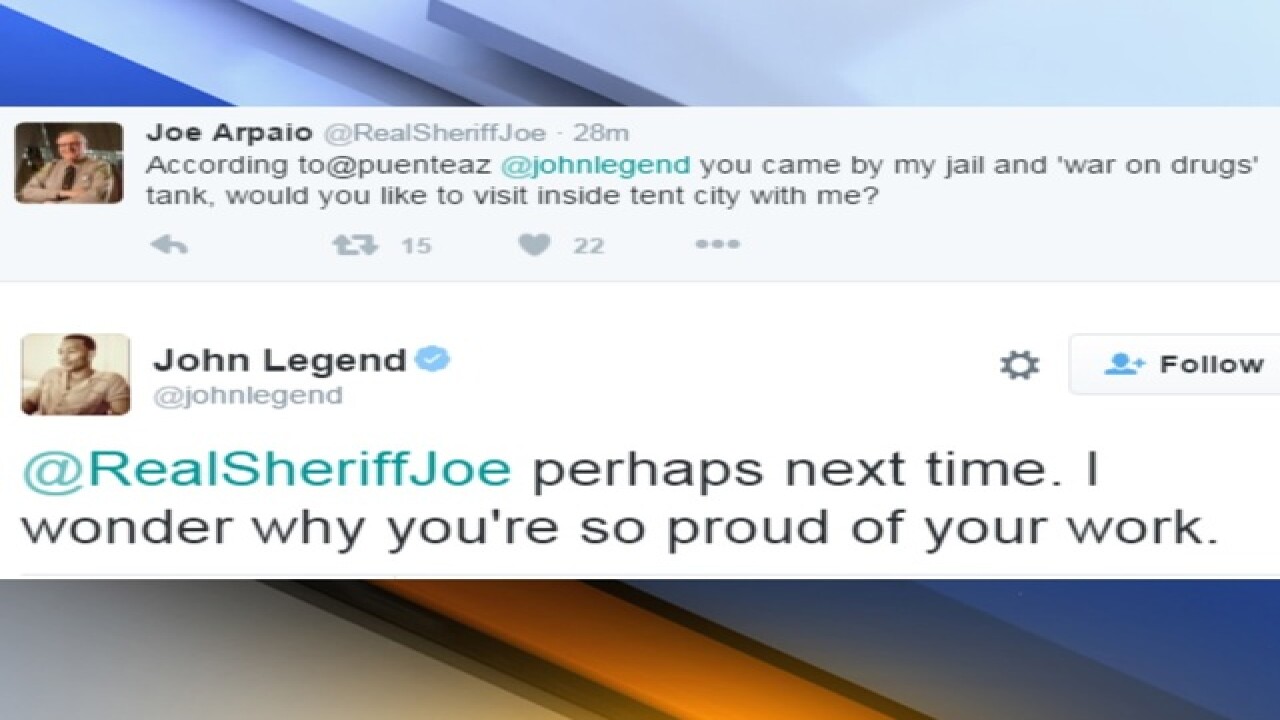 Colombian musician Juanes and singer John Legend met immigrants at a jail in Arizona on Wednesday before performing for a small crowd outside the facility to draw attention to immigration.

A video posted by John Legend (@johnlegend) on

The Grammy winners each played two songs separately and one together -- Bob Marley's "Redemption Song" -- as about 100 people sang along in Eloy, about 60 miles southeast of Phoenix.

"The reason why we're here, one, is because we want to bear witness to what's happening so we could tell the world about it," Legend said to the cheering crowd of immigrant rights activists and relatives of detainees.

Juanes played the guitar and Legend the piano atop a flatbed truck parked across the street from the federal detention center. An empty desert field served as the backdrop while people in the crowd held large signs and chanted "Not one more deportation" and "Si se puede," meaning "Yes we can."

Their intention was for the detainees to hear the music. But organizers were told the inmates were not let out of their cells to hear the concert.

Moments after the pictures were shared online, Arpaio responded to Legend asking if he'd like to visit inside Tent City with him.

According to @PuenteAZ @johnlegend you came by my jail and War on Drugs tank, would you like to visit inside tent city with me?

Legend responded to Arpaio with the following:

@RealSheriffJoe perhaps next time. I wonder why you're so proud of your work.

Both artists also met up with immigrant families, according to Puente.

Earlier, Juanes and Legend took a tour of the detention center and spoke to detainees inside.

Juanes said in Spanish that he was "heartbroken" by what he saw.

Maria Gomez, of Phoenix, said the singers' visit will let immigrants know that people care about them.

The 16-year-old said her brother and other relatives are being held in Eloy after traveling from Mexico City to Nogales, Arizona, where they sought asylum. Gomez said her family had been victims of kidnappings for ransom.

"It's something very special because not any artist would do this," Gomez said.

Francisca Porchas, of Puente Arizona, which helped organize the event, said her group's goal was for the singers to meet the detainees and families who have been fighting against strict immigration policies and raids. She said she hoped the visit would give detainees hope.

"For them it's something very important that they know they're not forgotten," Porchas said.

The organization transported about 60 people to the event in vans, while others drove on their own.

Juanes is a Latin American mega-star who has sold millions of albums and topped the Billboard Latin chart in the U.S. for a record 92 consecutive weeks with his breakthrough "Un Dia Normal" in 2002.

Legend has won nine Grammys and won an Oscar last year with the rapper Common for the song "Glory" from the film "Selma."