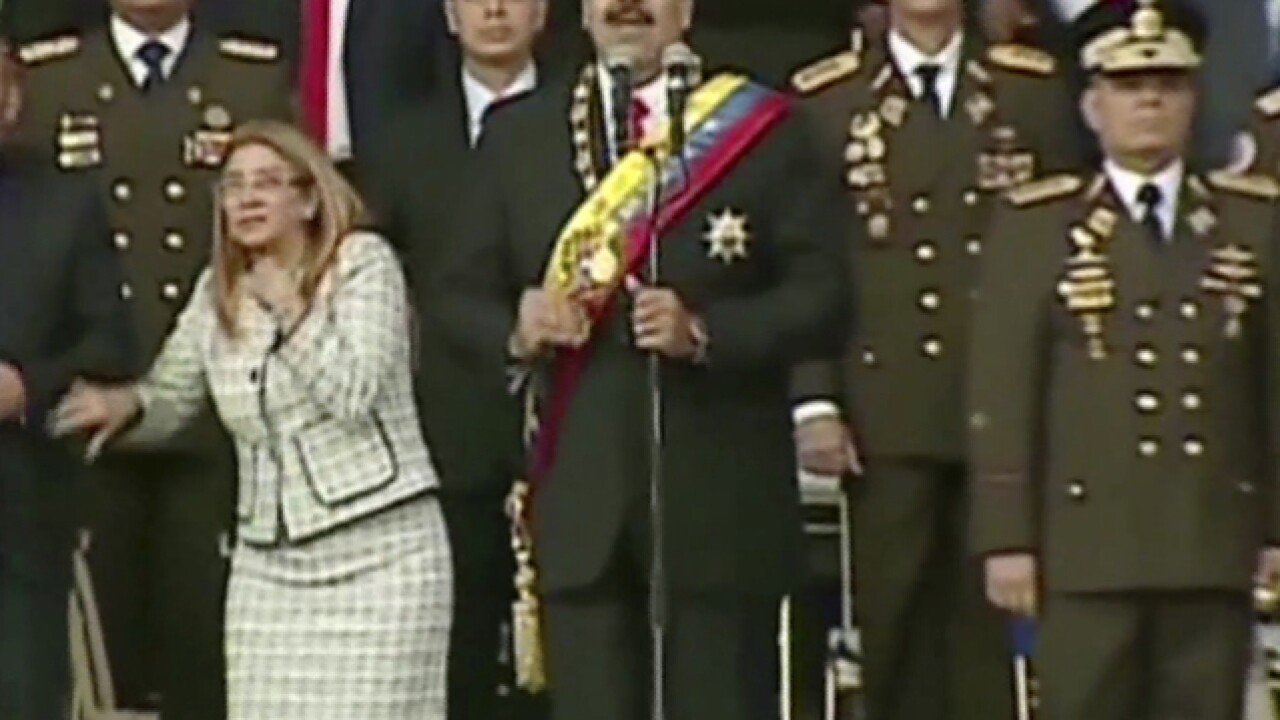 Copyright 2018 The Associated Press. All rights reserved.
<p>VIDEO STILL, BEST QUALITY AVAILABLE - In this still from a video provided by Venezolana de Television, Presiden Nicolas Maduro, center, delivers his speech as his wife Cilia Flores winces and looks up after being startled by and explosion, in Caracas, Venezuela, Saturday, Aug. 4, 2018. Venezuela's government says several explosions heard at a military event were an attempted attack on President Maduro. (Venezolana de Television via AP)</p>

Drones armed with explosives detonated near Venezuelan President Nicolas Maduro as he gave a speech to hundreds of soldiers in Caracas on Saturday but the socialist leader was unharmed, according to the government.

"At exactly 5:41 p.m. in the afternoon several explosions were heard," Rodriguez said in a live address to the nation minutes after the incident. "The investigation clearly reveals they came from drone-like devices that carried explosives."

But firefighters at the scene of the blast disputed the government's version of events.

Three local authorities who spoke on condition of anonymity because they were not authorized to discuss the case said the incident was actually a gas tank explosion inside an apartment near the site of Maduro's speech.

Smoke could be seen coming out a building window.

Venezuela's government routinely accuses opposition activists of plotting to attack and overthrow Maduro, a deeply unpopular leader who was recently elected to a new term in office in a vote decried by dozens of nations. Maduro has steadily moved to concentrate power as the nation reels from a crippling economic crisis.

In the midst of near-daily protests last year, a rogue police officer flew a stolen helicopter over the capital and launched grenades at several government buildings. Oscar Perez was later killed in a deadly gun battle after over six months on the lam.

"The right insists on violence to take public spaces that they can't win with votes," Diosdado Cabello, a high-ranking socialist party leader, wrote on Twitter Saturday after the apparent assault, which he characterized as a "terrorist attack."

"We are going to bet for the good of our country," Maduro declared triumphantly moments before the sound of an explosion pierced the air. "The hour of the economy recovery has come."

Seconds later Maduro and his wife, Cilia Flores, looked up to the sky and winced.

The cameras then turned to a wide shot of uniformed military officers standing at attention in neat lines as they broke rank and began running. The transmission then cut off.

Images being shared on social media showed officers surrounding Maduro with what appeared to be a black bullet-proof barrier as they escorted him from the site.