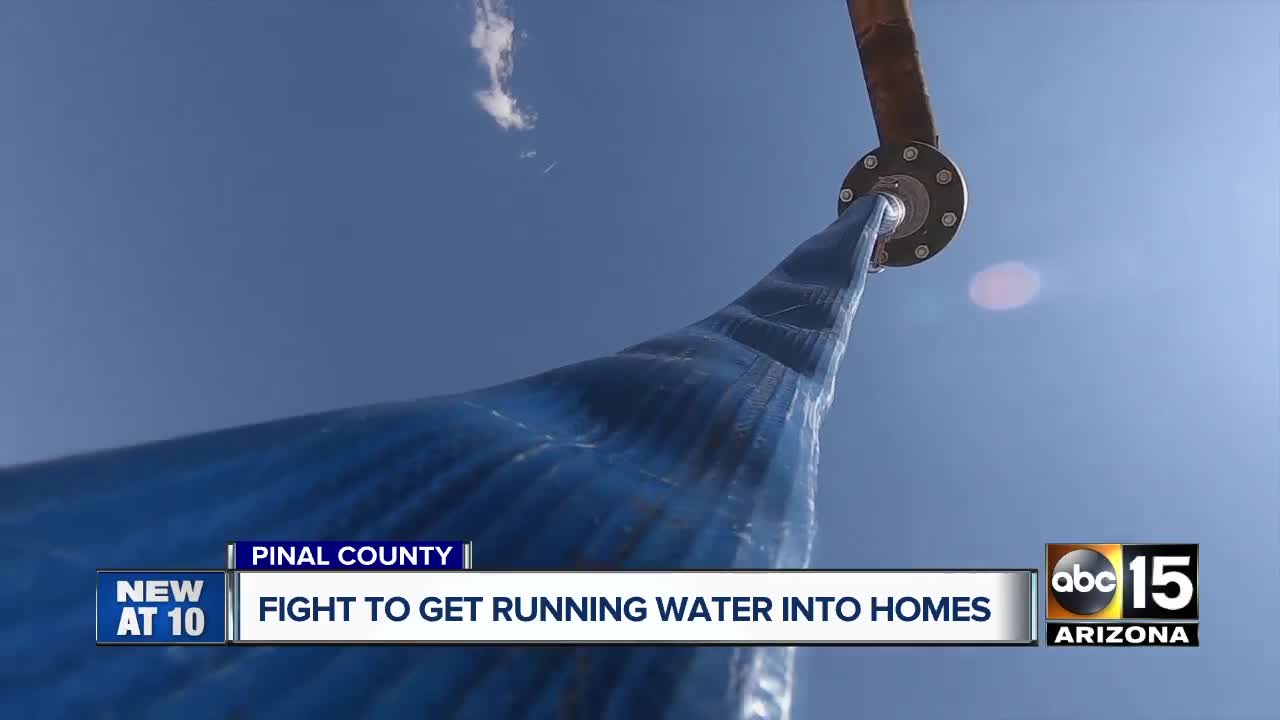 SAN TAN VALLEY, AZ — A community in a fast-growing part of the Valley has been living, and fighting, to get direct water service for years.

Residents in the Bonanza Highlands area of San Tan Valley say they have been begging to get hooked up to water lines for five years.

The current setup requires homeowners to drive to a structure called the standpipe and fill up from the above-ground pipe from large tanks. They pay using a meter installed in the pipe.

Residents like Phillip Nicoloff say they are making several trips to the standpipe every week to make sure they have enough water to use at home. It is backbreaking work in triple-digit heat. Many of the residents making the trip are elderly. Not all of them can afford to pay for companies that will deliver water they can use for daily tasks like bathing, cooking and cleaning to their homes.

The manual process is necessary because Bonanza Highlands is in a part of Pinal County that doesn't have water lines. The area lies within the service area for Johnson Utilities, a private company.

Residents said there was some hope in 2015 when Johnson Utilities promised them that water lines were coming. Residents showed ABC15 a notice they all received stating, "Have you heard the news? Johnson Utilities has been installing water mains in your area."

The company first asked residents to put down deposits for the water lines, which many of them gladly did. Then, residents said, they got word to hold on to their deposits until the construction began.

Four years later, the area still has no water lines.

"Will it be here before I die? I don't know," questioned Nicoloff.

In those last four years, Johnson Utilities has faced mounting public backlash. The Arizona Department of Environmental Quality, a state agency, has filed a $100 million civil lawsuit against the utility for allegedly violating water quality laws.

George Johnson, the company's CEO, was charged in federal court with bribing a former Arizona Corporation Commissioner to help raise water rates in Pinal County. That trial ended in a hung jury.

After receiving complaint after complaint and holding numerous town hall meetings, the Arizona Corporation Commission appointed an interim manager to take control of the troubled company. However, for many Johnson Utilities customers, that action came too slowly.

"The Arizona Corporation Commission had a lot to do with all of it. They've finally gotten a little bit better. They're finally starting to do their job, what we pay them to do," said Hefner.

But many residents feel the Arizona Corporation Commission has been slow to act regarding the standpipe issue. Commissioners asked ACC staff in 2018 to look into why Johnson Utilities had suddenly stopped building water lines in the area. Now a year later, residents reached out to ABC15 saying they still had no answers and no action.

When pressed by ABC15 on the fact that people had been commenting for a year without results, the commission sent a statement saying Johnson Utilities does not have to pay for the water lines under state law. Instead, residents have to pay for the infrastructure themselves.

Public documents indicate the cost to finish building water lines in this area is just under $400,000.

ABC15 then asked the ACC why residents were being asked to comment instead of being told they had to pay for the work on their own.

More than two weeks after ABC15 started looking into this story, corporation commission staff responded that they are now planning to have "good faith discussions" with a Bonanza Highlands community member, Johnson Utilities, and the third-party company appointed to manage the utility in an effort to see if all parties can reach a solution to this problem.

ABC15 is also told there will be an update regarding this issue in September.

The news brings a renewed sense of hope to residents who feel forgotten, not just by their own county leaders, but also by their utility company and state officials in charge of overseeing a troubled utility company.

Many of them have wanted to move out of the area, but have had trouble selling their property.

"Water is life. I mean you cannot live without water, correct? To force someone to have to fight for it, and beg for it, it is just ridiculous," said Nicoloff.

You can read the new procedural order here.