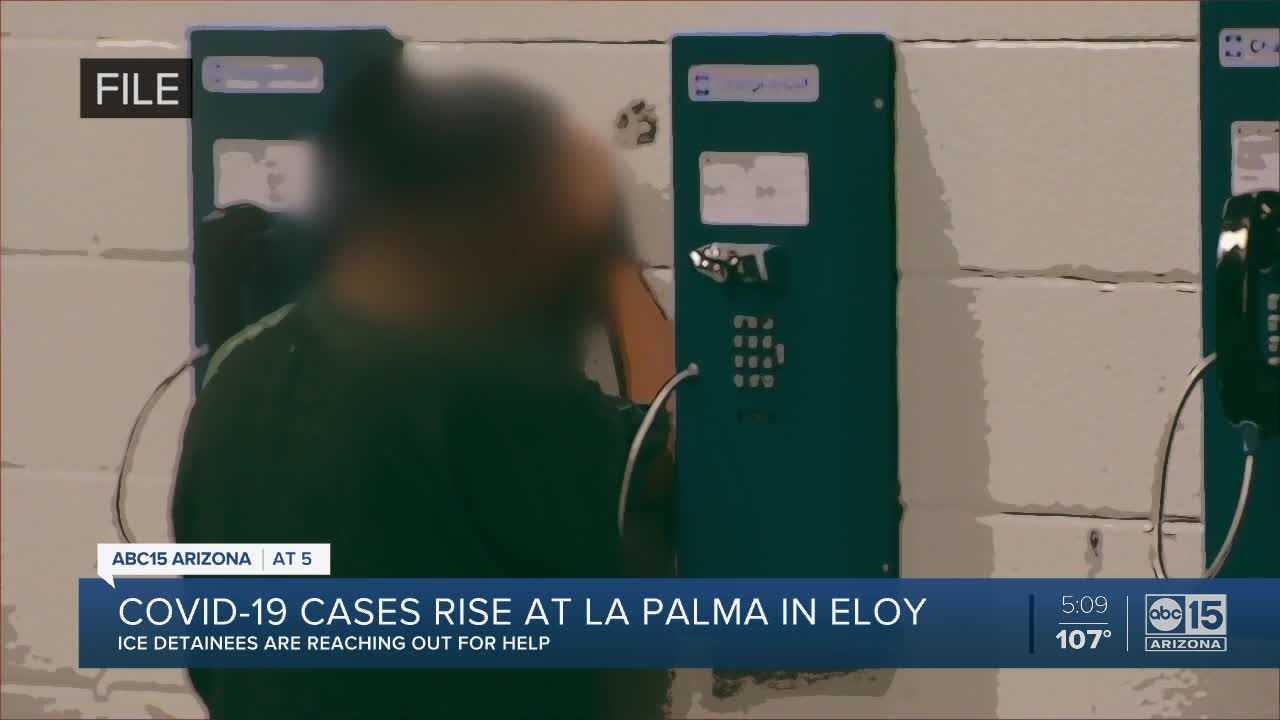 ICE says more than 1,000 undocumented immigrants in their facilities have coronavirus, including many of those at La Palma in Eloy.

ELOY, AZ — About 1,000 undocumented immigrants in U.S. Immigration and Customs Enforcement detention centers are infected with COVID-19 nationally. In Eloy, Arizona, the La Palma detention center has 75 confirmed cases of detainees with coronavirus, according to the ICE website.

La Palma immigration detention center is located 63 miles outside Phoenix. It is run by a private company called CoreCivic.

Many ICE detainees have reached out to ABC15 from inside La Palma detention center saying they are desperate.

“We lack soap for our hygiene, we’ve only been given one mask,” said Pablo, a detainee in La Palma whose name was changed at his request for fear of retaliation.

“We need help, that's why we’re trying to inform somebody,” said Jaime. His name was also changed to protect his identity.

Both detainees profiled throughout our reporting asked for anonymity because they fear being punished for speaking out.

Pablo and Jaime are part of the undocumented immigrants listed on a letter sent to ABC15 dated May 1, 2020, and signed by about 40 detainees.

Throughout this letter, detainees are asking ICE to provide them with basic hygiene products to stop the spread of the deadly disease inside the center.

Part of the letter reads: “We are all very scared and realize that we are confined to a death trap.”

ABC15 spoke to families of undocumented immigrants detained at La Palma and they all provided information to verify they are under ICE custody.

“They have kids out here waiting for them. It’s hard,” said Melissa Andrade, whose husband is detained at La Palma. She says he suffers from diabetes and high blood pressure, and those health conditions make him susceptible to COVID-19.

“I asked him if he has a mask and he said he has nothing,” said Andrade, who says she also worries about detainees using the same phones in the facility to call family.

“There are about six phones inside La Palma. They do now wipe down the phones,” said Andrade.

We reached out to CoreCivic for comment, and a spokeswoman with the private company sent us a statement saying, “there are six phones located in each pod, phones are cleaned after every use.”

An ICE spokesperson confirmed to ABC15 that the phone banks at La Palma are sanitized after every use.

“They don’t really have anything to prevent us from getting sick,” said Pablo, who has been at La Palma for six months.

Pablo says that during the pandemic, he has gotten one mask for protection.

In an email, CoreCivic told us: “Multiple surgical masks have been provided to date, in addition to two cloth masks for each detainee. If a detainee requests a new mask, one is provided.”

“They’re not safe there,” said Andrade. She believes her husband is at risk of getting infected with COVID-19 behind bars.

“It’s hard, very hard just to think that any minute you can receive a call saying your husband is sick.”

According to ICE: “If there is a concern regarding access to phones, or sanitation of phone banks, detainees are encouraged to communicate with detention staff.”