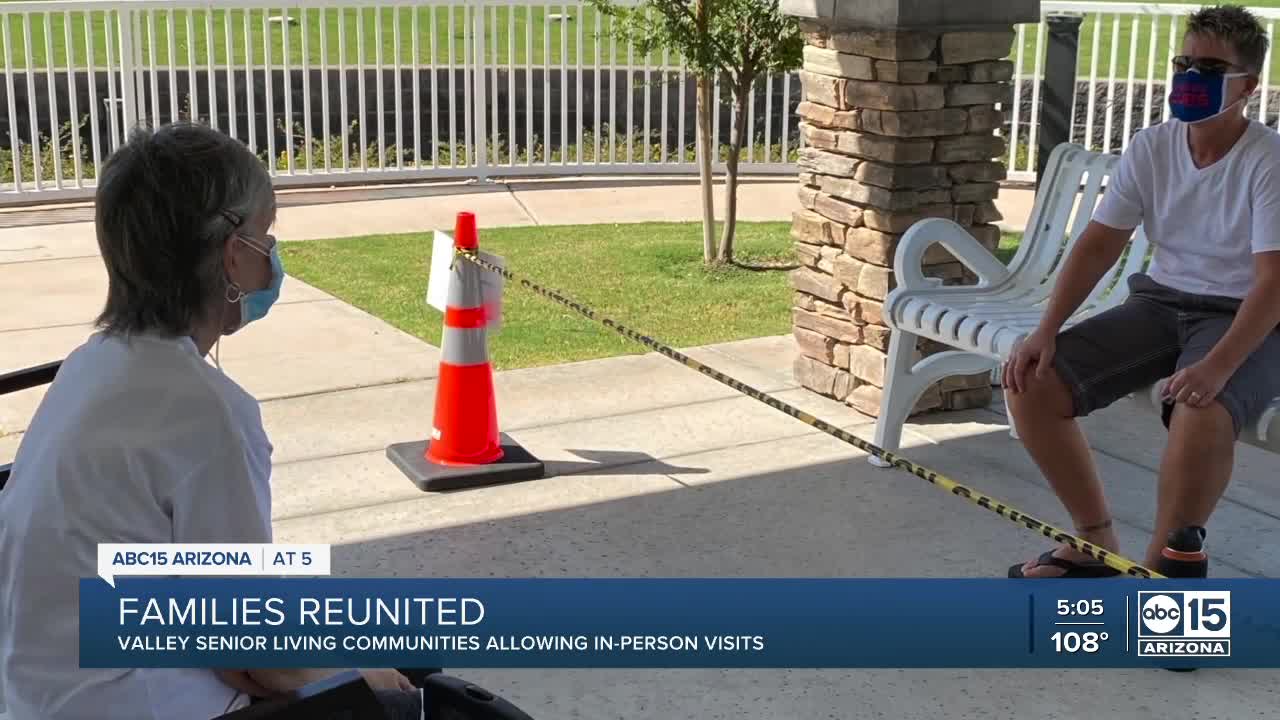 After several weeks of discussion and meetings, many Valley senior living communities are finally allowing in-person visits with family members once again.

Gov. Doug Ducey's long-term care task force unveiled their proposals for a safe re-opening of these facilities about two weeks ago, with the plans going into effect on September 4.

Since the pandemic forced them to lock the doors to outside visitors, many facilities were only allowing family members to see their loved ones through glass walls and windows.

"It is so different for them to be able to enjoy a visit without the glass window between them," said Dawn Milburn, community relations manager at Quail Park at Morrison Ranch, a senior living community in Gilbert.

The facility showed some of their new safety measures to ABC15.

All visitors have to undergo a temperature check and answer a short health survey before being allowed to proceed. A majority of the visitations are taking place in an outdoor area right now, which is set up so residents are sitting six feet apart from their loved ones. Visitors and residents are required to wear masks, unless medical issues prevent them from doing so.

Craig Klause surprised his mother Rosie with a visit over the weekend, bringing with him Rosie's dog whom the family has been caring for.

"It has been tough, it was about two and a half months the first time, they opened up for a little bit in May, then closed again," said Klause.

In line with the state task force's guidelines, Milburn said those who presented a negative COVID-19 test taken 48 hours before the visit could see their loved ones inside the facility. They were also making special accommodations for families dealing with "end of life" situations.

ABC15 is also learning that despite the state task force's guidelines, some Valley senior living communities are not ready to allow visitors in yet.

Shari Smith's mother, who suffers from dementia, lives in one of them. Smith asked us not to name the facility, but showed ABC15 text messages from a staff member stating they were "uncomfortable" allowing in-person visits, and planned to have their consultant give them guidance before moving forward.

Smith said she hoped they would ease up restrictions soon because she was already seeing her mother's health decline over the last six months.

With the threat of COVID-19 still looming in the community, Milburn said they too were on high alert at Quail Park at Morrison Ranch. Even one positive case could lead to them shutting down in-person visits again, quickly.