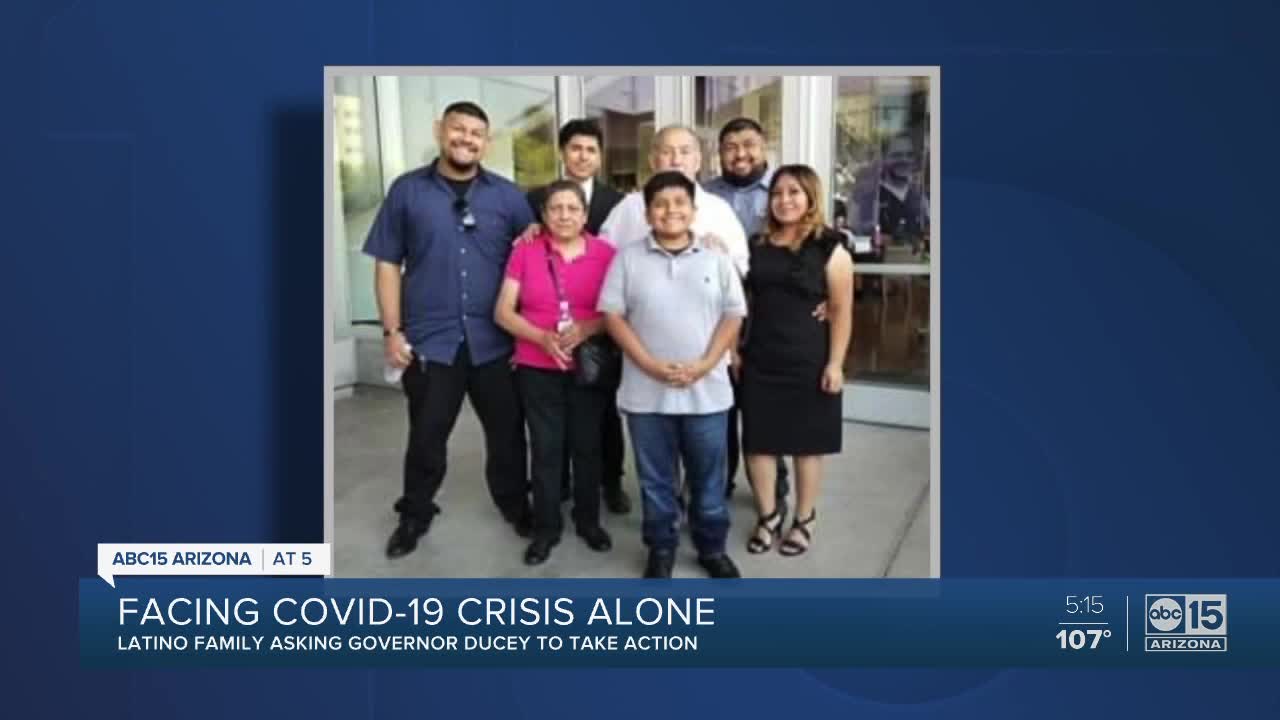 A Valley family is asking Governor Ducey to take action to help Latino families during the coronavirus.

PHOENIX — Nearly 29 million Latino workers nationwide will be affected during this pandemic, according to the League of United Latin American Citizens’ (LULAC) most recent report on the impact of COVID-19 on Latino families.

ABC15 spoke to a Valley father going through a financial and emotional struggle after losing five family members as well as almost losing his small business to the virus.

“We have been hit financially, mentally, physically, and emotionally,” said Ricardo Aguirre, whose family of six tested positive to COVID-19 in May.

Between May and June, five of his family members died after contracting COVID-19.

“We had no contact with them whatsoever and yet they passed away. In a matter of days, they got sick and they died,” said Aguirre.

He feels Latino families are being left behind. He blames it on a lack of leadership by Governor Ducey.

“A lot of people are dying, people are getting more sick. There are a lot of more cases every single day. The numbers don’t lie. I wish I was in front of him, so he can see what we’re going through.”

The report from LULAC’s outlines this crisis.

In Aguirre’s case, he fears future unknowns. The family’s Mexican food catering business has been closed since March.

That’s the question many Latino families are facing, according to LULAC. 49% of Latinos in the U.S have had a pay cut, been laid off or lost their job.

“LULAC has partnered with many organizations to help ensure that our families have the resources they need,” said Lydia Guzman, a member of LULAC and Chicanos por la Causa.

Guzman also notes locally they have developed a website called “Conexión” to help families like the Aguirre with resources such as unemployment insurance, rental/housing assistance and food boxes.

Also, LULAC’s report shows millions of Latino-owned businesses will see their sales drop to zero and go out of business, but Aguirre feels hopeful.

“There’s a lot of good people out there and I really thank them from the bottom of my heart.”

He says his wife and kids are doing better now after having the coronavirus, but his parents are still in ICU. In fact, his mother will still have to go to a long-term care facility to recover.

“My mother is on six liters of oxygen, but the problem is not that they’re better [it] is what we went through, the experience we all went through,” said Aguirre.

The statements from Governor Doug Ducey Thursday at a press conference is not what Aguirre wanted to hear. “He is still saying that we have to learn to live with it, that’s not fair.”

Aguirre also says he wants action, “you’re supposed to lead by example. You’re supposed to show others how to do their job. He hasn’t done any of that.” If you would like to help the Aguirre family CLICK HERE.