Taking action or is it just talk? What really has been done to cut utility costs during COVID-19? 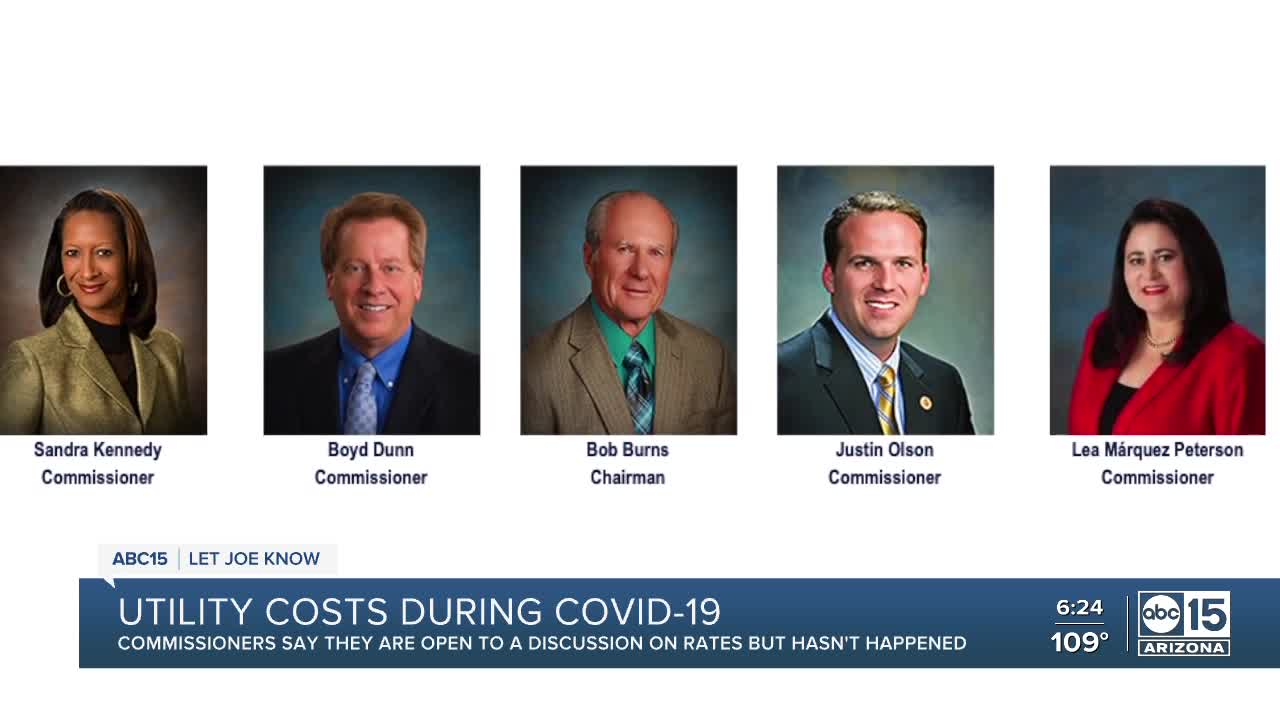 Utility costs are sky rocketing because of Valley heat as people are forced to stay home during coronavirus.

PHOENIX — This week, Arizona is seeing scorching temperatures. Combine that with the amount of people working from home, and it may make you think twice about where you set your thermostat during peak hours.

The Let Joe Know team has been asking leaders at the Arizona Corporation Commission if enough is being done to keep your utility bill from skyrocketing, especially for those who are facing financial challenges due to COVID-19. However, it seems the topic may not be up for discussion any longer.

When the Coronavirus Pandemic began over 5 months ago, things like a lower pandemic utility rate, rate increase reversals, and even crediting back fees you paid were all slated and discussed by the AZCC. In that time, only a single actionable step has been taken: a credit on your June bill for fees you already paid in the first place.

Those credits are far from the relief needed to offset peak hour usage while working from home. In most cases, the credit was only a few dollars.

ABC15 reached out to all five commissioners to ask if enough is being done to help customers during this time and if utility companies being held accountable.

In her response, Commissioner Marquez-Peterson outlined a list of actions she has supported through this process, including supporting “a discussion of peak rates and demand charges” as far back as April.

That was the same time Commissioner Kennedy spoke to us advocating for a lower pandemic rate.

“We have the ability to give rate increases during an emergency,” said Commissioner Kennedy during an April interview. “Why can’t we take this emergency that we're in, this pandemic emergency, and lower rates or even freeze rates?”

Both Commissioners now admit that those discussions have gone nowhere.

Commissioner Marquez-Peterson says she “has not heard from other commissioners whether they want to have or support this discussion at this time.”

Meantime, Commissioner Kennedy says overall, the commission “has not done anything… on behalf of the ratepayers to reduce their monthly costs.”

She also added that she is aware people are choosing between buying medications or paying bills and more action needs to be taken.

But, when will that happen?

The AZ Corporation Commission met again on July 14, but there was no item on the agenda discussing COVID-19 relief efforts.

We are continuing to push for answers but know that bills are still due.

APS and TEP, both regulated by the AZCC, say they are offering assistance to customers at this time.

In addition, SRP, who is not regulated by the AZCC, also says they have help lined up for customers who need it.