Power in Puerto Rico: Only 30 percent will be restored this month, governor says 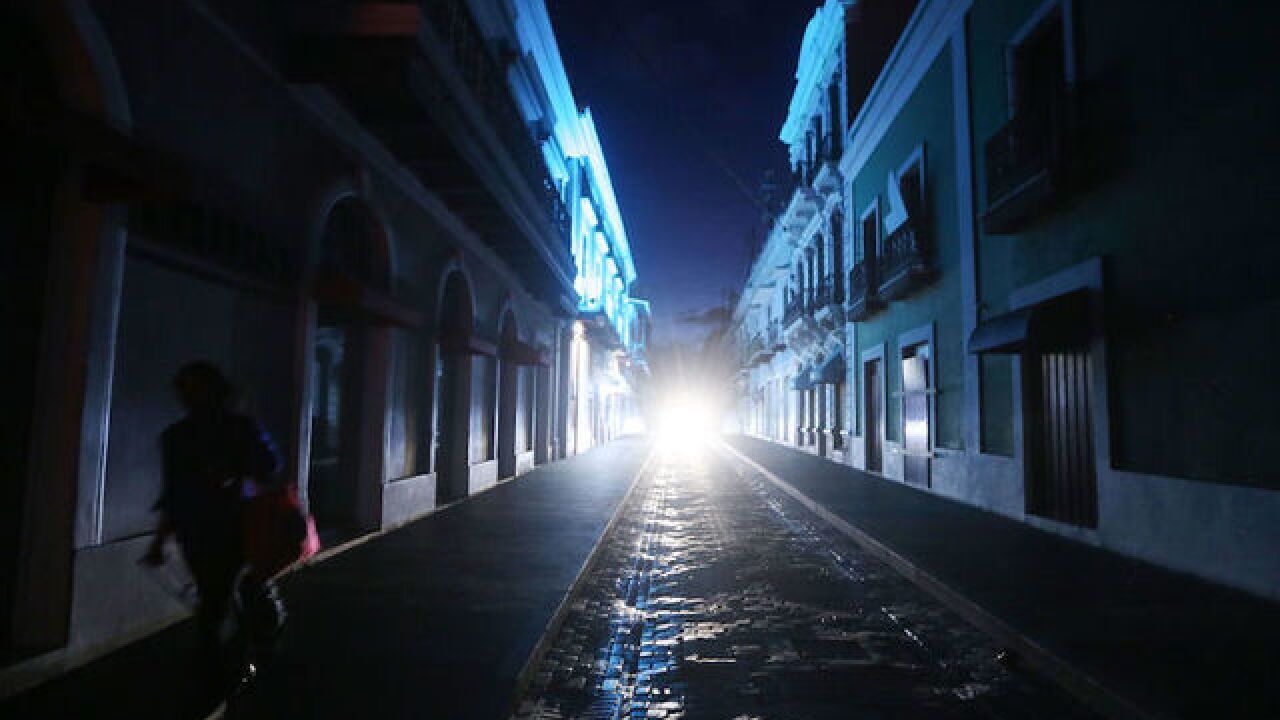 Copyright Getty Images
Mario Tama
<p>A woman walks down a darkened street past historic buildings in the touristic Old San Juan neighborhood, on October 13, 2017 in San Juan, Puerto Rico. Puerto Rico is suffering shortages of food and water in many areas and only 9 percent of grid electricity has been restored. The tropical island's tourism industry has collapsed. Puerto Rico experienced widespread damage including most of the electrical, gas and water grid as well as agriculture after Hurricane Maria, a category 4 hurricane, swept through. (Photo by Mario Tama/Getty Images)</p>

Puerto Rico Governor Ricardo Rosselló said he plans to restore power to 95 percent of the island's energy grid by December after Hurricane Maria devastated the infrastructure of the US territory.

As of Sunday, 85 percent of the island still had no electricity. Rosselló set a goal to restore power by December 15.

"This is an aggressive agenda but we cannot be soft of passive in the face of Puerto Rico's challenges," Rosselló said. "We are going to need all hands on deck."

During a news conference Saturday, Rosselló said his goal is to have 30 percent of the island's power restored by the end of the month. Then, the target would be to restore 50 percent by Nov. 15 and 80 percent by Dec. 1.

Authorities had estimated it could take them between six months to a year to restore power.

"Our goal as government is to give Puerto Ricans access to electricity with speed and efficiency," he tweeted.

The US Army Corps of Engineers would play a key role to make the plan a reality because they have the resources and would hire the manpower that the island's agencies lack, the governor said.

The Corps have been working on the island for a few weeks after FEMA tasked them with helping rebuild the island's infrastructure. They have been installing power generators, temporary roofs and reinstalling transmission lines.

The governor's announcement comes after a failure in the "central system" caused the percentage of customers with power to go down Friday.

Puerto Ricans have been depending heavily on generators. They use them to power lifesaving machines like ventilators and dialysis equipment, as well as to keep fans, air conditioners and stoves functioning.

They made lifestyle changes. Credit and debit cards are useless. ATMs are out. No Internet, television or air conditioning. Dead cellphone batteries. Everything from the water supply to sewage treatment to the preservation of food is threatened.

In the immediate aftermath of the hurricane, a shortage of fuel made things worse.

People would line up for hours at gas stations hoping to get a few gallons for their generators. Patients at a children's hospital in San Juan were in danger due to a diesel shortage.

Now, big-stores and restaurants have reopened because they are powered by generators. But Rosselló said he knows generators are just a temporary fix and eventually would also need repairs.

Puerto Rico's power grid was a mess well before the storm.

The island's electric utility filed for bankruptcy in July and officials had said the system was "vulnerable and fragile," and in urgent need of maintenance.

Part of the problem was the shortage of employees. Many workers recently retired or left their jobs for better prospects on the US mainland, Ricardo Ramos Rodríguez, the director of Puerto Rico's power utility told CNN affiliate WAPA.