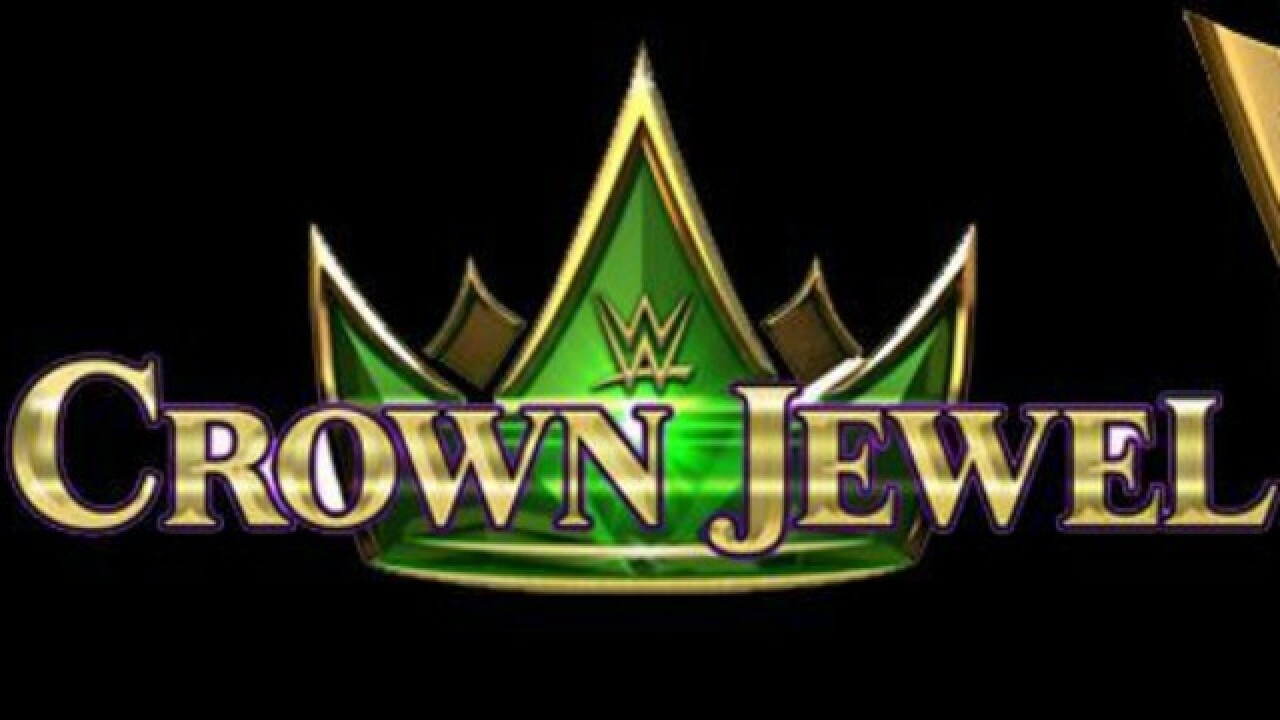 That's a nondescript way to describe a spectacle -- headlined by major stars including The Undertaker and Brock Lesnar -- that WWE would usually blitz fans with bombastic hype to promote.

Bigger! Badder! And usually with an event logo connecting the event to its host city, like the New York skyline or the fleur-de-lis for New Orleans incorporated into recent WrestleMania designs.

WWE instead has put Saudi Arabia on mute as backlash spreads against its lucrative long-term deal with a kingdom facing global uproar. The financials are murky but WWE is expected to make between $20 million and $40 million per event from two Saudi Arabian shows this year under a 10-year deal. Criticism from fans and politicians started because women were excluded from competition in an April event, then shifted and spread after writer Jamal Khashoggi was killed in the Saudi Consulate in Istanbul.

WWE fans, traditionally as non-PC as the crotch-chopping wrestlers in the ring, have booed each time Crown Jewel is mentioned when a wrestler cuts a promo and the video feed hyping the event was abruptly shut off to the crowd at its first all-female event Sunday to squash unfavorable reaction. The deal was lampooned in consecutive weeks on HBO's "Last Week Tonight with John Oliver."

WWE has tried to distance itself from the international outcry over the killing and downplayed its ties to Riyadh.

"We're not going to talk a lot about that," WWE chairman Vince McMahon said on a conference call. "It's a very sensitive subject these days, naturally."

The company's announcers have refused to mention Saudi Arabia on recent live events and WWE's website, as of Tuesday, only listed the date and time for the card. The page for April's Greatest Royal Rumble still listed King Abdullah Sports City Stadium in Jeddah, Saudi Arabia, under time/ location.

"WWE has operated in the Middle East for nearly 20 years and has developed a sizable and dedicated fan base," WWE said in a statement. "Considering the heinous crime committed at the Saudi consulate in Istanbul, the Company faced a very difficult decision as relates to its (Crown Jewel) event. Similar to other U.S.-based companies who plan to continue operations in Saudi Arabia, the Company has decided to uphold its contractual obligations to the General Sports Authority and stage the event."

WWE's stock price has fallen the last month after steadily rising this summer, dropping from $94.22 per share on Oct. 1 to $66.16 on Monday.

The backlash has also had repercussions for Crown Jewel's marquee clash. John Cena, the 15-year face of the company, was replaced on the Saudi Arabia card by another wrestler and the move written into the fictional storyline of the show. Cena, who could not be reached for comment, was widely reported to have misgivings about his participation and how it might affect his blossoming movie career.

"Don't give up on something you enjoy just because of the pressure from others around you," Cena tweeted Monday.

Fellow WWE superstar and Valley resident Daniel Bryan also reportedly has reservations about performing in Saudi Arabia. Reports on Tuesday said Bryan, a three-time WWE champion  has decided to pull out of his scheduled WWE championship match with A.J. Styles at the event.

Bryan's reported decision seemed to be confirmed when Bryan and Styles moved up their Crown Jewel match to WWE Smackdown Live on Tuesday night -- a match that Styles, the reigning WWE champion, won.

McMahon spoke of the sensitivity while reporting quarterly earnings, boasting revenue of $188.4 million for the third quarter and a record $657.7 million over nine months, ending in September. A massive chunk of that cash is derived from the Saudi Arabia shows -- and WWE has used the hefty checks to help lure retired Hall of Fame wrestler Shawn Michaels out of an eight-year retirement and fatten incentives for other talent.

"One of my biggest paydays in my history of working for Vince was making a trip to Saudi Arabia," WWE announcer Jim Ross said on his podcast. "I got paid very, very well."

WWE hasn't wavered in the face of public pressure even while other companies have rethought their business ties to Saudi Arabia. Endeavor, the parent company of the Ultimate Fighting Championship, pulled out of a deal that would have had Saudi Arabia invest $400 million.

"I haven't heard from somebody who did not want to go and felt afraid to speak out about it," said Wade Keller, editor and founder of wrestling news site PWTorch.com. "The people I've spoken to have had more of a shoulder shrug that it's sort of out of their hands and above their paygrade. But I do know there are people who are not comfortable with it and wish it wasn't happening."

The WWE has survived -- even thrived -- in the wake of unseemly PR messes in the past. McMahon faced steroid-related charges levied by the federal government in the early 1990s; a string of wrestlers suffered premature deaths, many drug related, throughout the late 1990s; and most notoriously, grisly murders committed by former champion Chris Benoit, who would also kill himself in 2007, rocked the organization.

Despite previous unrest, fans never went away in droves. Not when there was always the next big card on the horizon, the next witty catchphrase to market on a T-shirt or a future movie star in the making to keep fans hooked.

WWE has been bolstered by a family-friendly transformation over the last dozen years, and the company has eliminated many of the bloody, concussion-causing chair-shots to the head and foul language that scared off advertisers. The company has tried to clean up drug use with a wellness policy that nabbed even top wrestlers with violations. WWE placed a heavy emphasis on charitable and goodwill efforts with the military , cancer foundations, anti-bullying programs and Make-A-Wish, and strived to bond with the sports community. WWE routinely sends championship belts to World Series or Super Bowl winners that are raised high by beaming athletes on parade routes.

"This goes completely against what they have spent years trying to make the WWE brand about," Keller said. "I think fans bought into that and are feeling betrayed and let down. People who thought this was a company that meant to do good are now looking at this as a blood-money grab."

Mainstream America will always look with a raised eyebrow at wrestling -- sports entertainment, as WWE calls the profession -- and nearly 70 years of popularity means little to critics when the company steps out of line.

"There's a lot of things they can do to make the world a better place that don't involve having to plug their nose and play propaganda pieces for a government with the track record of Saudi Arabia," Keller said.

So why do it? Especially when cities bid for WrestleManias like Super Bowls and with billion-dollar TV deals with USA and Fox starting in 2019?

"They feel like they can survive it because if they get $40 million for this event, they can take a lot of body blows and head shots and still come out ahead in their mind if they're just calculating things on dollars and cents," Keller said. "But the negative vibe and loss of goodwill is apparent."