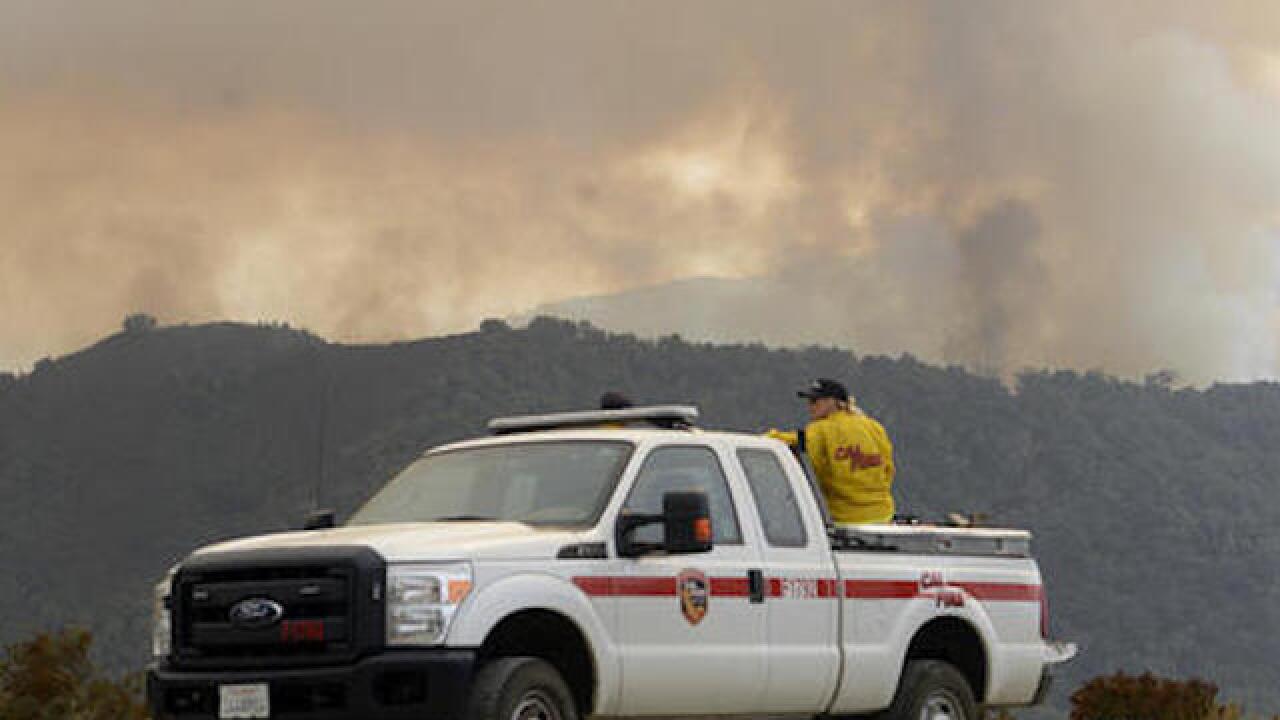 Copyright Associated Press
David Royal
<p>Cal Fire firefighters keep a lookout from Sky Ranch off Cachagua Grade as smoke and flames from a back burn light up a ridge to the south as firefighters battle the Soberanes Fire in east Carmel Valley on Monday August 1, 2016. (David Royal - Monterey Herald)</p>

Wildfires are burning in seven Western U.S. states, from California's famed Big Sur region to tribal towns and hamlets near Reno, Nevada. More than a dozen homes were destroyed in Montana, and evacuations were ordered in Nevada, Oregon and Wyoming. Firefighters were trying to stop a Washington blaze from reaching a thickly forested security zone at the Hanford Nuclear Reservation.

Here's a look at some of the fires:

Higher humidity and lower temperatures on Monday helped firefighters battle a destructive wildfire that has scorched more than 63 square miles near the scenic Big Sur coast, while firefighters in Central California faced blistering heat as they worked to contain a blaze that burned rural homes and forced hundreds of evacuations near the small Fresno County town of Prather.

A layer of ocean air that arrived in the mountainous Big Sur region was credited for the better conditions in an area where a fire that started July 22 has destroyed 57 homes and is threatening 2,000 more structures. A bulldozer operator working for the firefighting operation died in an accident last week. It is 18 percent contained.

The blaze near Prather has damaged three homes just outside the Sierra National Forest, the California Department of Forestry and Fire Protection said. About 300 people are under evacuation orders.

That fire started Saturday and by Monday had grown to over 3 square miles with just 20 percent of it surrounded by firefighters.

Just north of Los Angeles, a 65-square-mile wildfire in wilderness just north of Los Angeles was almost fully contained and only active with isolated pockets of vegetation burning within a fire lines. A man who refused to evacuate from a home was killed and the fire also prompted the evacuation of about 20,000 people.

Temperatures in the 90s, wind and low humidity caused significant expansion on Sunday. Firefighting aircraft were grounded for about 45 minutes because of people flying their drones in the area.

The fire closed a section of State Highway 21 between Idaho City and Lowman and destroyed two outbuildings.

A firefighter suffered burns during the weekend when fuel spilled on his arm and it ignited.

At least 14 homes were destroyed by a fast-moving wildfire in the Bitterroot National Forest in western Montana, authorities said Monday.

Ravalli County authorities ordered residents of about 500 homes to leave the area after the fire began Sunday afternoon southwest of Hamilton.

It had burned nearly 5.5 square miles by Monday night.

"I've talked to homeowners who said we had 200-foot flames coming off those trees. This thing really blew up, and I've never seen anything like it in the years that I've been" with the Bitterroot National Forest, spokesman Tod McKay said.

Ravalli County Sheriff Chris Hoffman said he could not immediately provide details about the number of homes or buildings destroyed.

About 800 firefighters were battling a series of fires that had threatened a tribal town and hamlets near Pyramid Lake, north of Reno.

Residents of about 30 homes in Cottonwood Creek and Fish Springs Ranch were warned they would receive 30 minutes notice to evacuate if necessary.

About 600 people were ordered out of the shoreline town of Sutcliffe over the weekend, and 200 were evacuated from beach areas.

Eastern Oregon residents urged to evacuate over the weekend because of a wildfire were allowed to return home.

About 20 structures remained threatened by the fire east of the town of Pendleton, the Oregon Department of Forestry said.

The East Oregonian reports that columns of smoke were rose Sunday after the blaze scorched about 500 acres of grass and timber along Interstate 84.

It was 25 percent contained by Sunday evening.

A wildfire burning toward the Hanford nuclear reservation has scorched about 273 square miles of brush and grass as it spread from Yakima County into Benton County in south-central Washington.

The blaze, the largest of several wildfires in central and eastern Washington, began Saturday on the U.S. Army's Yakima Training Center and quickly grew in size over the weekend.

But fire lines set overnight and low winds Monday are helping to slow the fire's progression, said Randall Rishe, a spokesman with the U.S. Bureau of Land Management. Officials said Monday night better mapping allowed them to determine the fire had burned significantly more acreage than previously thought. About 250 residences are at risk, officials also said Monday night and the fire is 10 percent contained. The cause is being investigated.

The Department of Energy said Monday on its website that Hanford work schedules were not immediately affected by the fire.

Firefighters made progress in their effort to contain several fires burning in western part of the state.

An approximately 2-square-mile blaze that destroyed eight homes and prompted the evacuation of about 140 others in southern Uinta County was 25 percent contained.

Northwest of Dubois, a 21-square-mile blaze was 40 percent surrounded and some residents who evacuated seasonal homes were allowed to return.

In neighboring Bridger-Teton National Forest, a fire that has burned about 45 square miles was 81 percent contained.