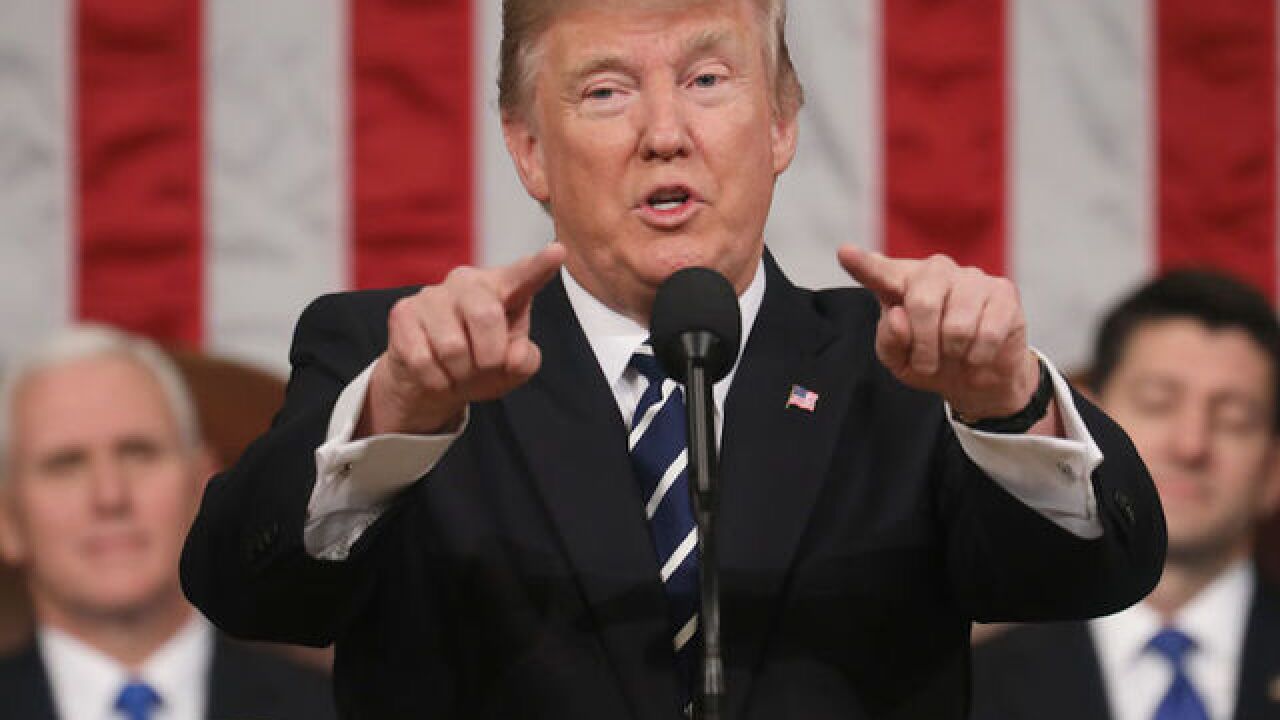 President Donald Trump is asking Congress to look into whether the Obama administration abused its investigative powers during the 2016 election, White House press secretary Sean Spicer said in a statement Sunday.

The request came a day after Trump took to Twitter to accuse former President Barack Obama, without providing any evidence, of wiretapping his phones in Trump Tower in the weeks before the November election.

"Reports concerning potentially politically motivated investigations immediately ahead of the 2016 election are very troubling," Spicer said in the statement, which he also posted on Twitter. "President Donald J. Trump is requesting that as part of their investigation into Russian activity, the congressional intelligence committees exercise their oversight authority to determine whether executive branch investigative powers were abused in 2016."

"Neither the White House nor the President will comment further until such oversight is conducted," Spicer added. He did not provide any further details on the President's request to Congress.

While Spicer said "reports" to that effect prompted the call for a congressional investigation, the White House still has not provided any evidence to back up the President's accusations. There are no publicly known credible reports to back up Trump's claim that Obama ordered Trump's phones be monitored.

Instead, multiple former senior US officials have dismissed Trump's allegations, calling them "nonsense" and "false." Obama, through a spokesman, also rejected the claim that he ordered Trump's phones tapped.

Former Director of National Intelligence James Clapper, a career intelligence official who had oversight of the US intelligence community in that role, said Sunday that Trump was not wiretapped by intelligence agencies nor did the FBI obtain a court order through the Foreign Intelligence Surveillance Act to monitor Trump's phones.

"For the part of the national security apparatus that I oversaw as DNI, there was no wiretap activity mounted against the President-elect at the time, or as a candidate, or against his campaign," Clapper said Sunday morning on NBC's "Meet the Press."

Asked whether he could confirm or deny whether the FBI could have tapped Trump's phones through a FISA court order, Clapper was unequivocal.

"I can deny it," he said, referring to the existence of a FISA court order of Trump or "anything at Trump Tower."

Senate Minority Leader Chuck Schumer said he believes Trump is "in trouble" whether there was a court order authorizing surveillance of his phones or "if he falsely spread this kind of misinformation."

"If he falsely spread this kind of misinformation, that is so wrong. It's beneath the dignity of the presidency. It is something that really hurts people's view of government," the New York Democrat said Sunday on "Meet the Press." "On the other hand, if it's true, it's even worse for the President. Because that means that a federal judge, independently elected, has found probable cause that the president, or people on his staff, have probable cause to have broken the law or to have interacted with a foreign agent. Now that's serious stuff."

Schumer said he had no problem with the congressional intelligence committees including Trump's request in their investigation into Russian activity in the 2016 election, but he also used the call as an opportunity to reiterate Democrats' calls for a special prosecutor to investigate connections between the Trump campaign and Russian officials.

Sen. Marco Rubio, a Republican who sits on the Senate Intelligence Committee, said Sunday on CNN's "State of the Union" that he's "not sure what it is (Trump) is talking about," but added it's possible that "perhaps the President has information that is not yet available to us or to the public."

Rubio pointed out that the Senate Intelligence Committee is already in the process of reviewing Russia's meddling in the US elections last year and will eventually issue a public report.

"But what I think we should do is, everybody needs to take a deep breath and calm down here," the Florida Republican told CNN's Jake Tapper. "And let's go through this as what we are doing. In the Senate Intelligence Committee, we are working in a bipartisan way to collect facts that involve reviewing classified and sometimes unclassified and open-source information."

Sen. Susan Collins, also a member of the Senate Intelligence Committee, said Sunday morning that she has "seen no evidence" to back up Trump's wiretapping allegation and called on the White House to turn over any evidence to the committee.

"What we need to deal with is evidence, not statements," the Maine Republican said on CBS' "Face the Nation."

"You make up something and then you have the press write about it, and then you say, 'everybody's writing about this charge,'" Pelosi told CNN's Jake Tapper on "State of the Union." "It's a tool of an authoritarian, to just have you always be talking about what you want to be talking about."

"And then to take it to the Congress and say, 'you investigate this,' when he's been not in favor of Congress investigating anything, including what do the Russians have on Donald Trump, politically, financially, or personally," Pelosi said, suggesting Trump wasn't serious about his request that Congress look into whether the Obama administration abused its investigative powers during the 2016 campaign.

Rep. Jim Himes, a Democrat from Connecticut who sits on the House Intelligence Committee, tweeted at Spicer that he looks forward "to seeing your evidence," calling the allegations a "mess."