Wheelchairs Against Guns teaches students about consequences of gang life 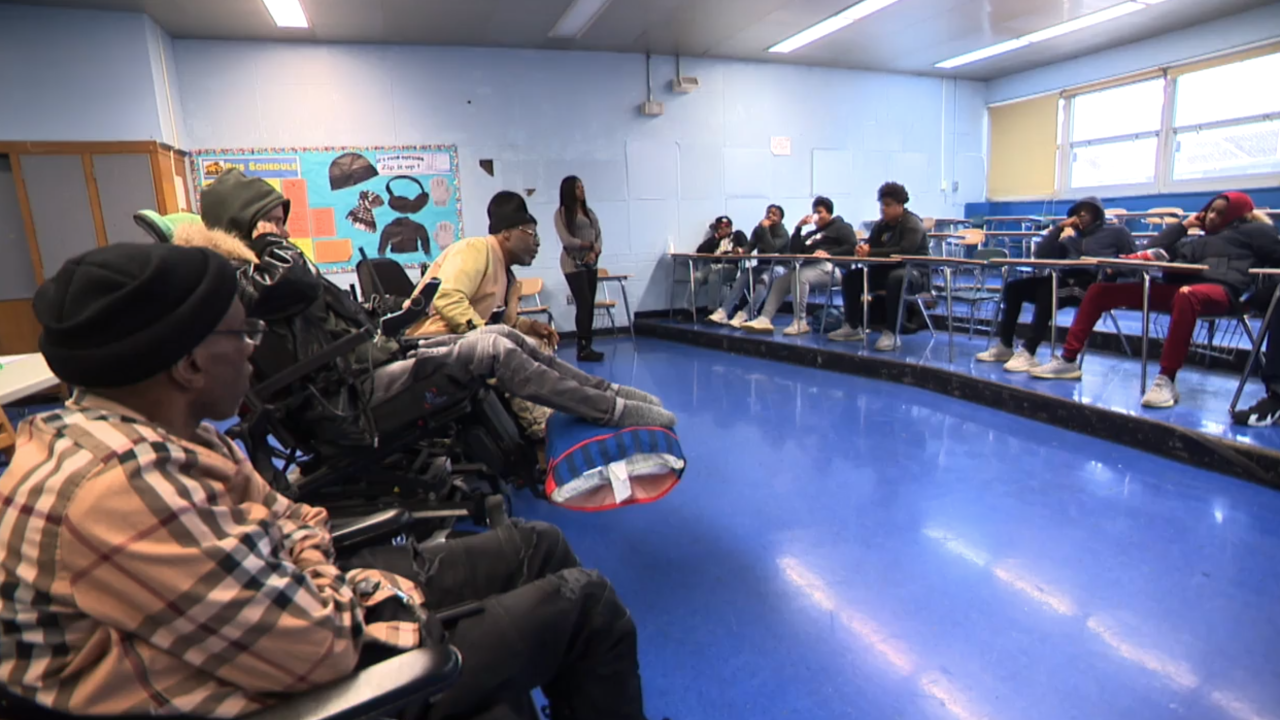 BROOKLYN, N.Y. – At Canarsie Educational Campus in Brooklyn, the lesson plan was switched up for a day. Instead of learning history, English or math, students learned about what being in a gang is like. And, they learned from those who know that world best.

“Let me ask y’all a question, what today is promoting the violence amongst y’all?” asked Kareem Nelson in front of a dozen students inside a classroom.

Nelson was born and mostly raised in Harlem. He’s a former member of a street gang known as “The Black Mafia.”

“I started selling crack cocaine at 12 years old,” said Nelson. “I was a follower. I had low self-esteem, so I did the things I thought would help me fit in.”

At the tender age of 12, Nelson told students he thought gang life offered glory, friendship and some protection. He ultimately would learn the hard way, none of that was true.

“I went to Baltimore, thought I was the toughest guy in the world, and I got shot,” Nelson explained to students.

That’s what put him in a wheelchair. He was paralyzed and lost half a lung. However, eventually it was that moment and another gang-related near death experience that helped him give up gang life.

“I escaped with my life and from that night on, I said ‘I don’t want kids to have to go through what I went through,’” Nelson explained.

Seven years ago, Nelson founded Wheelchairs Against Guns. With WAG, he goes into schools around New York City, with other former gang members, trying to prevent students from making the same decisions they did.

WAG talks to kids at schools, because Nelson knows that is where gangs often recruit.

“For one, their parents aren’t around,” Nelson explained. “And right here, this is where kids are the most impressionable, where they find themselves and gang members know it, so they are like ‘we are going to go to the schools.’”

According to the National Center on Addiction and Substance Abuse, 45 percent of students across America report having gangs and gang members in their schools. The Centers for Disease Control adds that just over three-quarters of all school homicides are the result of in a single act of one-on-one violence. Often times, that violence is gang related or the result of “interpersonal disputes.”

“If you and I were in the street and I bumped you, what would that cause?” Nelson asked a class of students. They responded, “a conflict.”

“You know why I got shot, because I didn’t know how to resolve my conflicts,” said Nelson.

Wheelchairs Against Guns hopes to reduce the grip gangs have on some students in the country, through teaching better conflict resolution skills, giving students an awareness of self-esteem’s role in potential gang interest and by offering up a first-hand account of where gang life leads you.