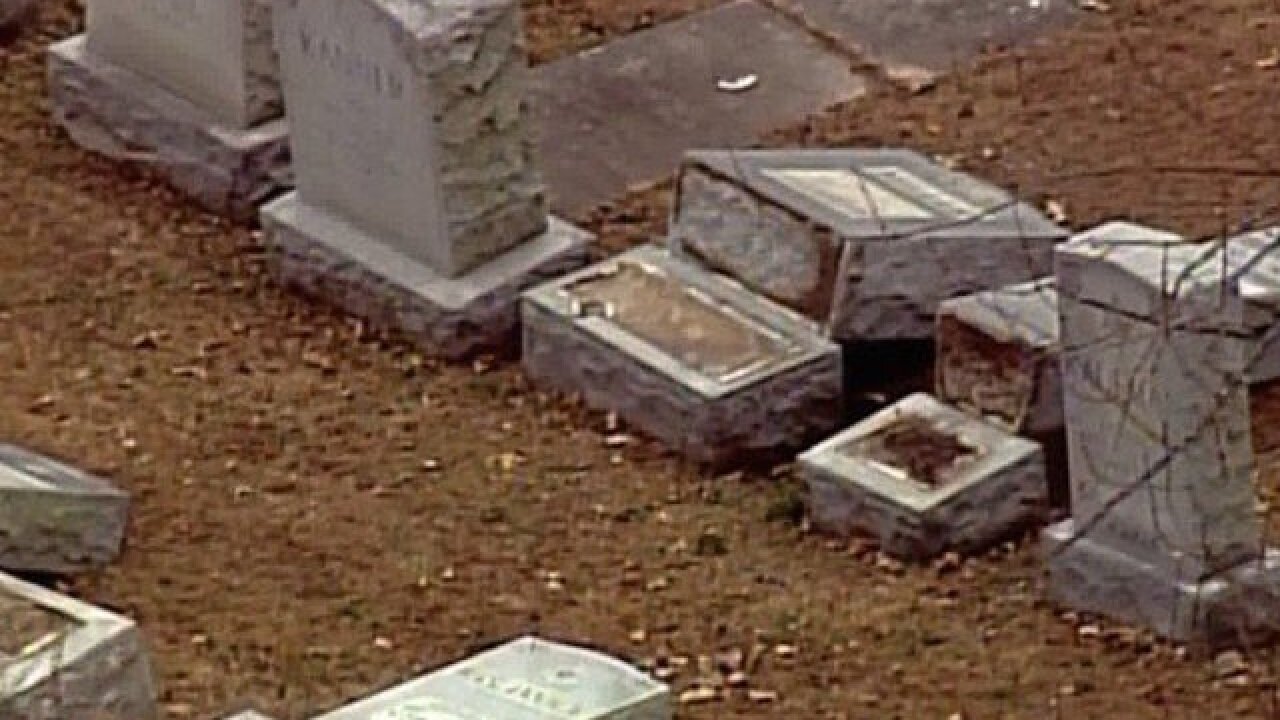 (CNN) -- Tensions remain high in Jewish communities across the United States as police in Missouri are investigating vandalism over the past week at a historic Jewish cemetery.

Police confirmed Monday that vandals toppled and damaged about 100 headstones at the Chesed Shel Emeth Society cemetery in St. Louis. Officers responded to a report of vandalism around 8:30 a.m., the University City Police Department said in a statement.

The report of the break-in came on the same day that the White House denounced 11 bomb threats against Jewish Community Centers that were reported Monday morning.

Police are reviewing security camera footage in the areas surrounding the cemetery but would not say if they considered the vandalism to be a hate crime, according to CNN affiliate KTVI.

Missouri's Gov. Eric Greitens tweeted Monday night that he was: "Disgusted to hear about the senseless act of desecration at the cemetery in University City. We must fight acts of intolerance and hate."

He also called the break-in a "cowardly" and "despicable act of what appears to be anti-Semitic vandalism," in a statement posted on Facebook.

On Facebook, the cemetery thanked the Chesed Shel Emeth Society families for their patience: "We are assessing the locations and damage and will post names that are affected as soon as we are able. Many monuments are facing down and we won't be able to read the names and see if there is any damage until we lift the stones. We want to minimize further damage and need to take the proper precautions."

Regardless of the motive for the vandalism, the cemetery is sacred ground, said Karen Aroesty of the Anti-Defamation League of St. Louis.

"There's a difference here between intent and impact. The intent may have been one thing, but the impact is huge on the Jewish community," she told CNN affiliate KTVI. "This is where your loved ones come to be safe in perpetuity."

"The level of tension in the Jewish community is pretty high," she told told CNN affiliate KTVI.

The land where the cemetery is located was purchased in 1893 by a group of Jewish immigrants from Russia.

The investigation into the cemetery break-in comes as 11 more bomb threats were reported by various Jewish centers across the country Monday morning, according to the JCC Association of North America.

In the previous threats, David Posner, the director of strategic performance of the JCC Association of North America, said community centers in United States and Canada have received 69 threats at 54 centers since January. The organization is working with law enforcement and the FBI to investigate the threats.

The Anti-Defamation League said in a statement: "While ADL does not have any information at this time to indicate the presence of any actual bombs at any of the institutions threatened, the threats themselves are alarming, disruptive, and must always been taken seriously."

Though the White House denounced the bomb threats, the Trump administration has faced criticism for not been forceful enough to rebuking acts of anti-Semitism that have occurred nationwide since his election.

During a press conference last week, Trump himself was less clear about his position on the matter. When asked directly by a reporter for a Jewish publication about the rise in anti-Semitic threats, the President told the reporter to sit down, called the question insulting and responded by defending himself in hyperbolic terms.

"So here's the story folks: No. 1, I am the least anti-Semitic person that you've ever seen in your entire life. No. 2, racism. The least racist person. In fact, we did very well relative to other people running as a Republican."

The White House also faced criticism on International Holocaust Remembrance Day last month when it omitted any mention of Jews or anti-Semitism in a statement marking the day.

White House spokeswoman Hope Hicks explained to CNN the statement omitted references to Jews because "despite what the media reports, we are an incredibly inclusive group and we took into account all of those who suffered."