US fugitives say Cuba has reassured them they are safe 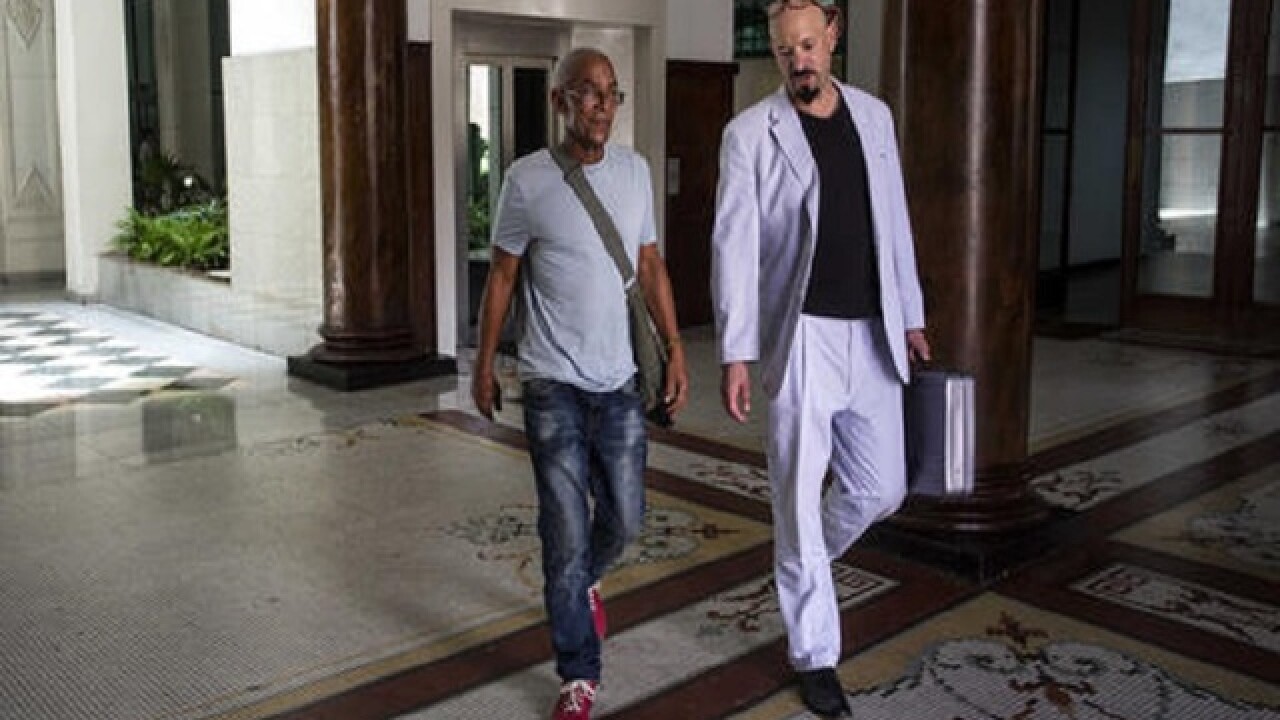 Desmond Boylan
<p>U.S. fugitive Charles Hill, left, walks with his lawyer Jason Flores Williams after an interview in Havana, Cuba, Friday, June 10, 2016. Hill, 66, who is sought in the 1971 killing of a New Mexico state policeman, told The Associated Press that Cuban contacts recently assured him he was at no risk of extradition. (AP Photo/Desmond Boylan)</p>

By: Associated Press
Posted at 6:28 PM, Jun 13, 2016
HAVANA (AP) — Two American fugitives who fled to Cuba after they were accused of killing police officers said Friday that Cuban officials have assured them that detente with the United States will not lead to their extradition.
The United States and Cuba held a second round of law-enforcement talks last month dedicated partly to resolving the fate of scores of fugitives after more than a half century with almost no cooperation. The talks are part of a series of U.S.-Cuba negotiations aimed at normalizing relations after the two countries declared an official end to Cold War hostilities on Dec. 17, 2014.
The discussions have raised U.S. law enforcement hopes that fugitives living in Cuba for decades will return to the United States to face trial or serve prison under plea deals.
Charles Hill, a black militant wanted in the 1971 slaying of a New Mexico state policeman, told The Associated Press that Cuban government contacts had recently reassured him he was at no risk of extradition. Nehanda Abiodun, another black militant wanted in a 1981 armored car robbery that left two police offers and a security guard dead, told the AP she had recently received a similar promise.
Cuba is home to dozens of people wanted in the United States on charges ranging from Medicare fraud to killings committed in the name of black and Puerto Rican revolution movements in the 1970s and '80s. Cuba has asked the United States to return a smaller number of people, including Luis Posada Carriles, the alleged mastermind of a series of terror attacks against Cuba, including the 1976 bombing of a Cuban airliner that killed all 73 people on board.
Cuba's head of U.S. affairs told the AP shortly after the declaration of detente that Cuba was entitled to grant asylum to U.S. fugitives, a sign that people the country once saw as fellow revolutionary fighters will remain safe. The most prominent is Assata Shakur, who is on the FBI's list of most-wanted terrorists. She broke out of a prison where she was serving a conviction for murdering a New Jersey state trooper. She was regularly spotted in Havana after fleeing to Cuba but has not been seen here in public in recent years.
Hill said he had contacted his Cuban government handlers about three weeks ago after seeing reports that progress was being made in negotiations that could lead to his extradition.
"My people assured me that no, that's not going to take place," Hill said. "I said what's the status and they said there's no problem.
"The future is very difficult," he said. "I don't know, but I think the Cuban government is going to maintain their position. I feel very tranquil."
Abiodun said Cuban agents recently told her she's still safe on the island.
"I feel good," she said. "I have been assured that my safety is secure.
"I am very, very thankful for their generosity, not only for me but for other comrades that have unfortunately had to leave the United States because of political oppression."
New Mexico State Police Chief Pete Kassetas said the thaw of U.S. relations with Cuba has increased his hope that Cuba will facilitate the transfer home of Americans accused of violent crimes, including Hill.
He called fleeing the country a cowardly act on Hill's part and said that "if any country can afford him a fair trial, it is the United States."
Kassetas said he would expect Hill to face federal charges in connection with a 1971 hijacking of a plane that brought him to Cuba, along with murder charges at the state level. Hill denies killing State Police Officer Robert Rosenbloom during a traffic stop.
U.S. Sen. Tom Udall said Thursday that he wants to "leverage the re-opening of relations with Cuba to finally bring Charlie Hill to justice."
The Democratic senator for New Mexico traveled to Cuba in March with President Barack Obama and said he met with Cuban officials to discuss the possibility of returning Hill to the United States. He said the case was brought up during two past dialogues on law enforcement issues.
"I have heard reports that Charlie Hill wants to return to the United States," Udall said in an email. "And I would encourage him and his attorney to work with law enforcement and the United States government to facilitate the transfer."
Hill's lawyer, Jason Flores-Williams, said Hill was confident about his client's ability to stay in Cuba but the new era of U.S.-Cuba normalization had created some uncertainty.
"With the normalization of relations we have concerns that the U.S. may be, as they have in the past in Latin America, using monetary leverage to try to get in so that they can appease the law-and-order forces in America currently via the extradition of Mr. Hill," he said.
A spokesman for the FBI in Albuquerque declined to comment on Hill and prospects for his return.
Copyright 2016 The Associated Press. All rights reserved. This material may not be published, broadcast, rewritten or redistributed.