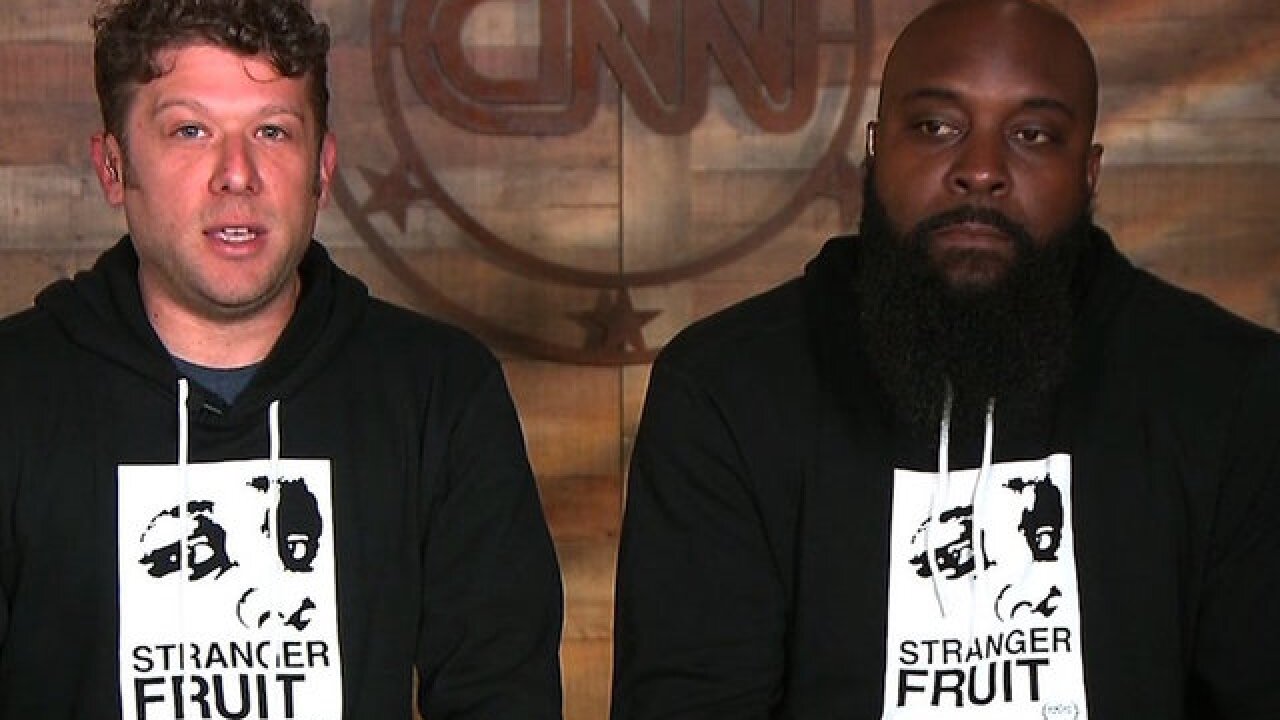 © 2017 Cable News Network, Inc.
CNN
<p>Jason Pollock (left), the director of a new documentary called "Stranger Fruit", about Michael Brown, discusses a newly released video and what led up to Brown being shot and killed.</p>

(CNN) -- New video captured hours before Michael Brown was killed shows the 18-year-old exchanging marijuana for cigarillos with the clerks of a Ferguson, Missouri, store, a documentary director told CNN on Monday.

Director Jason Pollock, whose film "Stranger Fruit" debuted at South by Southwest in Austin over the weekend, said the video shows that Brown did not rob the store before and that surveillance footage purporting to show Brown engaged in a robbery at the Ferguson Market and Liquor stores was actually video of Brown returning to the store to retrieve the cigarillos the clerks gave him.

"This is a shady store. We've asked a lot of people in this community. You can buy weed at the store," Pollock said.

Pollock suggests that had this footage been released, it would've altered the narrative that Brown was shot after robbing the store. Police say the new footage is irrelevant to their investigation. Investigators have previously said Officer Darren Wilson initially stopped Brown for walking in the street, not because the store reported a robbery.

About 100 protesters gathered at the store Sunday night, forcing it to close, and gunshots were heard before midnight, but no one appeared to be injured, according to the St. Louis Post-Dispatch.

An attorney for the store and its employees is accusing Pollock of editing the video. CNN cannot independently confirm the video's authenticity.

Brown gave a bag containing the cigarillos back to the clerks.

The new surveillance footage, captured about 11 hours before Officer Darren Wilson fatally gunned down Brown in August 2014, shows Brown place a small bag on the counter. Two of the clerks pick it up and appear to sniff it.

The clerks then give Brown a bag with cigarillos, which he takes, but he then turns around and gives it back to them before leaving. According to Pollock, it was common for residents to barter with the clerks, and the younger clerks did not want an older clerk to know what they were up to.

So, in the widely publicized video released after Brown's death, Brown was not stealing cigarillos, but rather, retrieving them after he'd left them in the store earlier, the filmmaker said.

'My clients did nothing wrong'

Attorney Jay Kanzler, who represents the store and employees, told CNN that the version of events in the documentary is false and that it has been edited to omit a clerk throwing a bag back to Brown.

"My clients did nothing wrong," Kanzler said. "They love the people of Ferguson and truly want to get on with their lives."

Kanzler was present at the market during the protests Sunday night. Video from the scene shows him speaking to people as protesters shout at him.

He said that the full surveillance video will be released Monday.

Pollock, however, stood by his claims, saying, "We show the entire exchange. We show the exchange from behind the counter. ... Anybody that sees it sees what happens.

The Ferguson Police Department did not respond to CNN's request for comment. The St. Louis County Police Department told CNN regarding the video that they "cannot confirm its authenticity at this time." However, the department said the new footage isn't pertinent to its investigation.

"If it did occur, the incident is still irrelevant to our investigation because our department investigated the encounter between Michael Brown and Darren Wilson," St. Louis County Police said.

Then-Ferguson Police Chief Tom Jackson told the media days after Brown's death that the "robbery does not relate to the initial contact between the officer and Michael Brown." Wilson "connected" Brown to the robbery call only after pulling him over for walking in the street, the former chief said.

Kanzler claims the the soon-to-be-released video will refute the filmmaker's "edited version of events."

He adds that the video is "not new" and that the full video was handed over to police, the FBI and also the Brown family "very early on."

Protests erupted across the country after Brown's death.

Many were upset with the Ferguson Police Department's decision to release the original surveillance video of the altercation at the store because they felt it was aimed at justifying police use of force.

The original Ferguson Police report does not mention Brown's earlier visit to the store or speak to any additional video beyond what was initially released.

Wilson, who resigned from the Ferguson Police Department, claimed he was assaulted by Brown and that he feared for his life.

Both a grand jury and the U.S. Justice Department declined to indict Wilson.