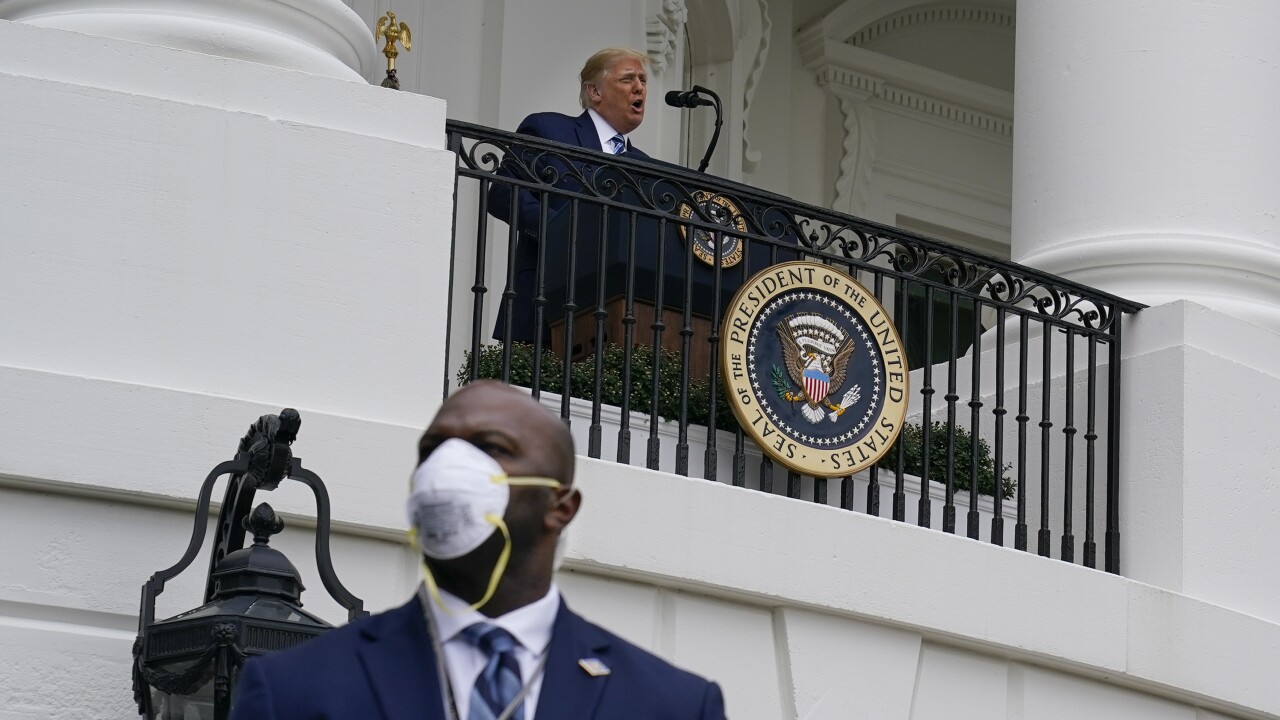 Alex Brandon/AP
President Donald Trump speaks from the Blue Room Balcony of the White House to a crowd of supporters, Saturday, Oct. 10, 2020, in Washington. On the lower left is a member of the Secret Service wearing a face mask. (AP Photo/Alex Brandon)

While President Donald Trump tosses masks to supporters at his rallies, Secret Service agents protecting him at those campaign events are often not wearing them.

Secret Service policy is that agents are required to wear masks, sources tell ABC News, but agents on the president's detail don't always follow it.

An ABC News review of video and photographs of the president's Secret Service detail from before his COVID-19 diagnosis shows agents closest to the president frequently not wearing masks, going against Centers for Disease Control and Prevention guidelines.

Since the start of the pandemic, agents on Trump's detail accompanying him to various rallies and events both inside and outside were almost always seen not wearing masks, apparently in deference to a president who routinely criticized those wearing them.

At the first presidential debate, he mocked his Democratic challenger, former Vice President Joe Biden, for wearing a mask.

"I don't wear masks like him. Every time you see him he's got a mask. He could be speaking 200 feet away and he shows up with biggest mask I've ever seen," Trump said.

Agents on Biden's detail are commonly seen wearing masks around the candidate, according to photos and videos reviewed by ABC News, and have been

But when it comes to Trump, agents not wearing masks were seen working at recent White House events where the virus may have been present.

The Secret Service is refusing to comment on why the president's detail has not been following the agency's policy requiring agents to wear masks, but a spokesperson said in a statement, "The Secret Service continues to follow CDC guidelines regarding the use of PPE. While we continually assess the environment in which we conduct our protective operations, we will not discuss the manner in which we conduct them."

It is unclear if any Secret Service agents have become ill from the recent White House outbreak, but several agents have tested positive for COVID, including two that were among an advance team for a June Trump campaign rally Tulsa, Oklahoma.

One former Secret Service agent said that mask-wearing might come down to the aesthetics of the work environment.

"With the aesthetics of the White House, because the whole aura of White House, that they consider them themselves in a carefree and a safe environment, and so it wasn't a practice that was endorsed," former Secret Service Assistant Deputy Direct Lynda R. Williams told ABC News.

"However, the Secret Service did supply [PPE] to those agents, whereas Vice President Biden, he promotes mask-wearing, he promotes social distancing. ... And so everyone around him adhered to that," Williams added.

"This is one of the most powerful weapons we have in the fight against COVID-19," Redfield said, holding up a mask at a recent Senate hearing.

Mask-wearing among agents on the president's detail became more visible after his own COVID-19 diagnosis.

But when a photo showed agents inside the SUV with Trump when he took his surprise ride to wave to supporters outside the Walter Reed hospital, it raised questions from former agents who said he had put the safety of agents at risk.

White House chief of staff Mark Meadows said that "additional precautions" were taken to make sure agents were protected during the short drive. The agents in the vehicle could be seen wearing masks, face shields and protective coverings over their clothing.

"Given the president's COVID-19 infection, this was a gratuitous and dangerous political exercise that needlessly exposed his Secret Service agents -- as well as their families -- to the potentially deadly novel coronavirus," Joseph Petro, a former Secret Service agent, wrote in an op-ed published in The Washington Post.

"Where was the Secret Service senior management? Did anyone resist this potential danger to these agents and perhaps their families? It was an avoidable risk, and someone should have objected," he wrote.

Williams, who now serves as the national president of the National Organization of Black Law Enforcement Executives, said that if she were still in a leadership position at the Secret Service, she would promote and enforce mask-wearing.

"Particularly as we're in this environment and even more so in this last phase of campaigning," Williams said. "Just being a Secret Service agent, you are exposed to numerous people, but even more so as they are out there campaigning."