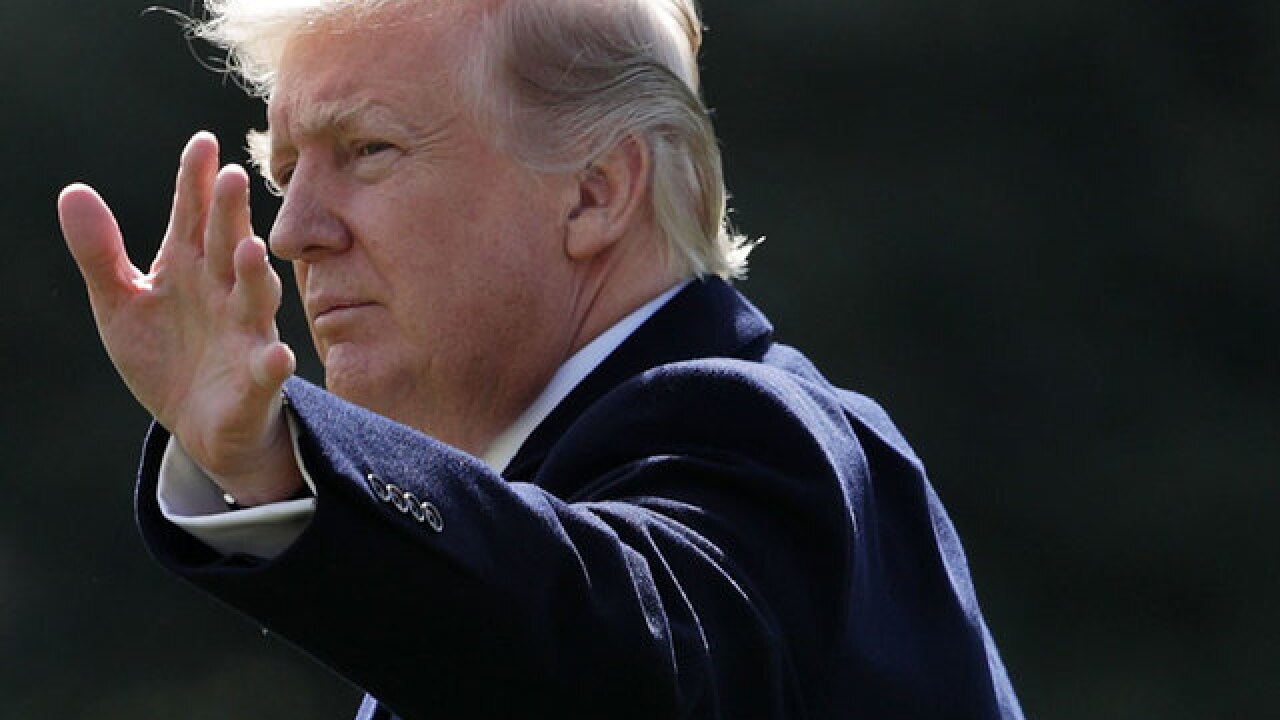 Image copyright 2017 Getty Images. All rights reserved. This material may not be published, broadcast, rewritten, or redistributed.
<p>President Donald Trump waves as he walks towards the Marine One for a departure on the South Lawn of the White House on March 2, 2017. (Photo by Alex Wong/Getty Images)</p>

In the single biggest political test of his presidency thus far, the President is looking to carry the Obamacare repeal and replace bill across the finish line. In a closed-door meeting with House Republicans, his message was blunt: You could lose re-election if you don't vote for this legislation.

It was clear, lawmakers said, that Trump was energized by the supporters that had come out for him Monday night in Louisville, Kentucky. But that support may not last, he warned.

"We won't have these crowds if we don't get this done," Trump said, according to a source in the room

He later added: "I honestly think many of you will lose your seats in 2018 if you don't get this done."

Despite the warning, members leaving the gathering described what they said was vintage Trump -- exuberant, humorous and ready to charm.

"Trump was first rate in every way," said GOP Rep. Tom Cole, an ally of House Speaker Paul Ryan. "He was truly spectacular. This is part of the job that he enjoys and excels at -- closing the deal."

"He was charming. He was funny. He really did a great job, I think, in letting us know we're in this together," Hudson said. "He's counting on us to vote for this bill."

Trump's political message, Hudson said, was "the American people are watching. They gave us the House, the Senate the White House and if you squander this opportunity I think there will be real consequences for you and the rest of the party."

Republican leaders are looking to the President to use the full power of his bully pulpit and negotiating skills to pressure members who are still on the fence before Thursday's planned vote.

Asked Tuesday walking to the meeting if he can get the votes, Trump responded, "I think so."

Late Monday, House leadership announced a set of moderate changes to their health care bill meant to reassure both conservatives and moderates who have a distinct set of concerns about the legislation.

But it's still not clear if those changes will be enough.

Members of the House Freedom Caucus announced Monday night that while they would not be taking an official stance against the bill, members said there were enough "no" votes among their group to sink the measure.

Trump specifically called out Freedom Caucus Chairman Mark Meadows, R-North Carolina, saying he thinks both Meadows and the group will get on board. "A loss just isn't acceptable," Trump said.

The President also said if the Freedom Caucus members don't come along they could face a primary.

Meanwhile, there is nervous energy among moderate Republicans who fear the political optics of the Congressional Budget Office's assessment that millions more would be uninsured under the GOP bill than under Obamacare.

In advance of Trump's arrival, Ryan walked members through the changes unveiled Monday, according to a source inside the meeting. His pitch is that this was as much as they could do, to mollify as many concerns as they could, at this point in the process. He also made clear the reality of their situation: every change in one direction upsets those on the other side of things, so it's a delicate balance, the source said.

At a rally in Nashville, Tennessee, last week, supporters of the bill noticed that Trump only discussed the health care bill for a few minutes. On Monday night in Louisville, Kentucky, Trump discussed the legislation -- but his tone suggested that he wanted to get the negotiations over with so he can move on to other priorities like tax reform.

One GOP aide was blunt: "Well, hopefully he'll at least talk about health care. So here we are: Can he actually close this deal? This whole thing has been contingent on the idea that the answer to that is yes. We'll see today."