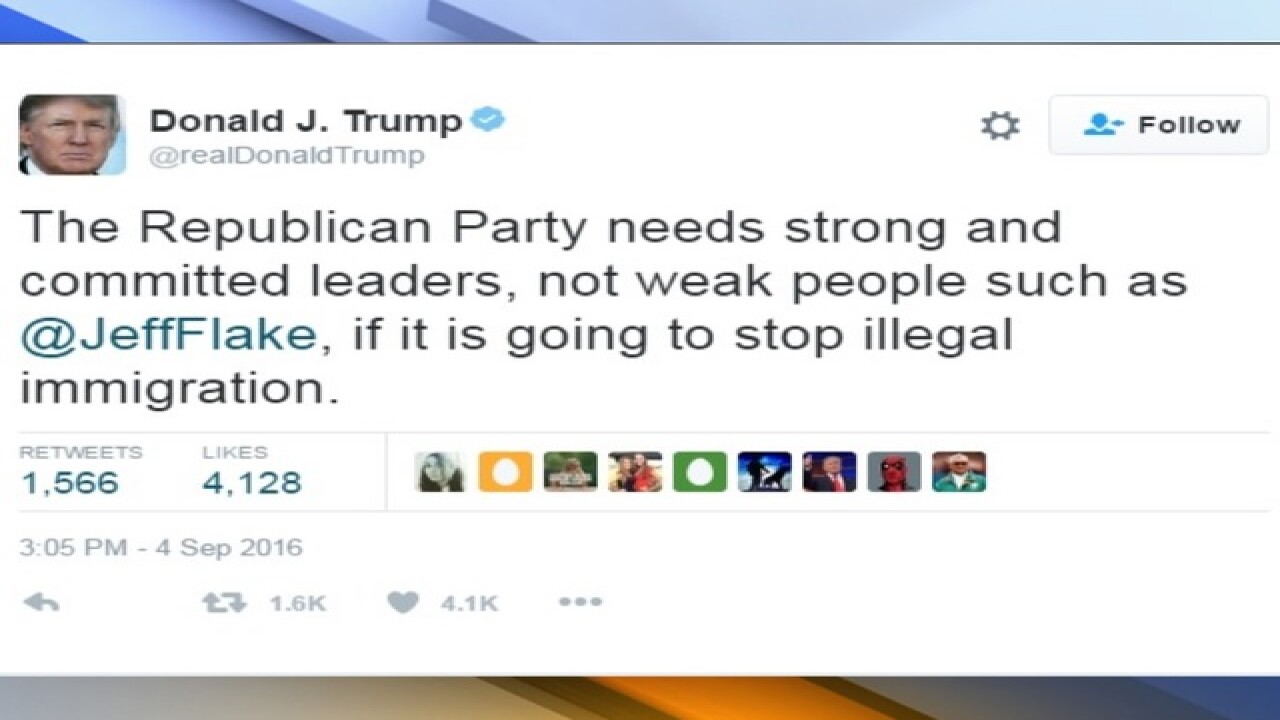 When Republican presidential nominee Donald Trump said he loved the people of Arizona last week at a rally in Phoenix, he probably wasn't talking about Senator Jeff Flake.

In a pair of tweets Sunday, Trump called Flake "weak" and "ineffective."

The Great State of Arizona, where I just had a massive rally (amazing people), has a very weak and ineffective Senator, Jeff Flake. Sad!

The Republican Party needs strong and committed leaders, not weak people such as @JeffFlake , if it is going to stop illegal immigration.

Earlier in the day, Flake appeared on CNN's show 'State of the Nation,' where he was asked about Democratic presidential nominee Hillary Clinton's chances of winning the Grand Canyon State.

"Arizona should still be a red state," Flake told host Jake Tapper. "But Donald Trump, with the rhetoric he has used and the characterization of many the state's population have put the state in play."

An email seeking comment from Flake's office was not immediately returned over the holiday weekend.

Flake has been one of the most prominent elected officials to criticize his party's nominee on issues such as immigration and trade.

The Republican nominee running well to the left of the Democrat on trade? Not a banner day for the GOP https://t.co/ec0MjbWe7m

According to the Washington Post, Flake also confronted Trump in July about previous comments against fellow Arizona Senator John McCain when Trump was in D.C. to meet with Republican members of the House and Senate. Flake is reported to have greeted Trump by saying "I'm the other Senator from Arizona--the one who didn't get captured."

At the time, Flake responded by saying, in part, "When [Trump] attacks the other senator from Arizona, John McCain, and attacks his war record, by saying that, you know, 'I don't respect people who get captured,' that's an awful, awful thing to say about a war hero."

The split between the two has become a visible sign of a possible rift between sections of the Republican Party and the man voters nominated for president.

RELATED: For Trump, party unity is nice, but not necessary