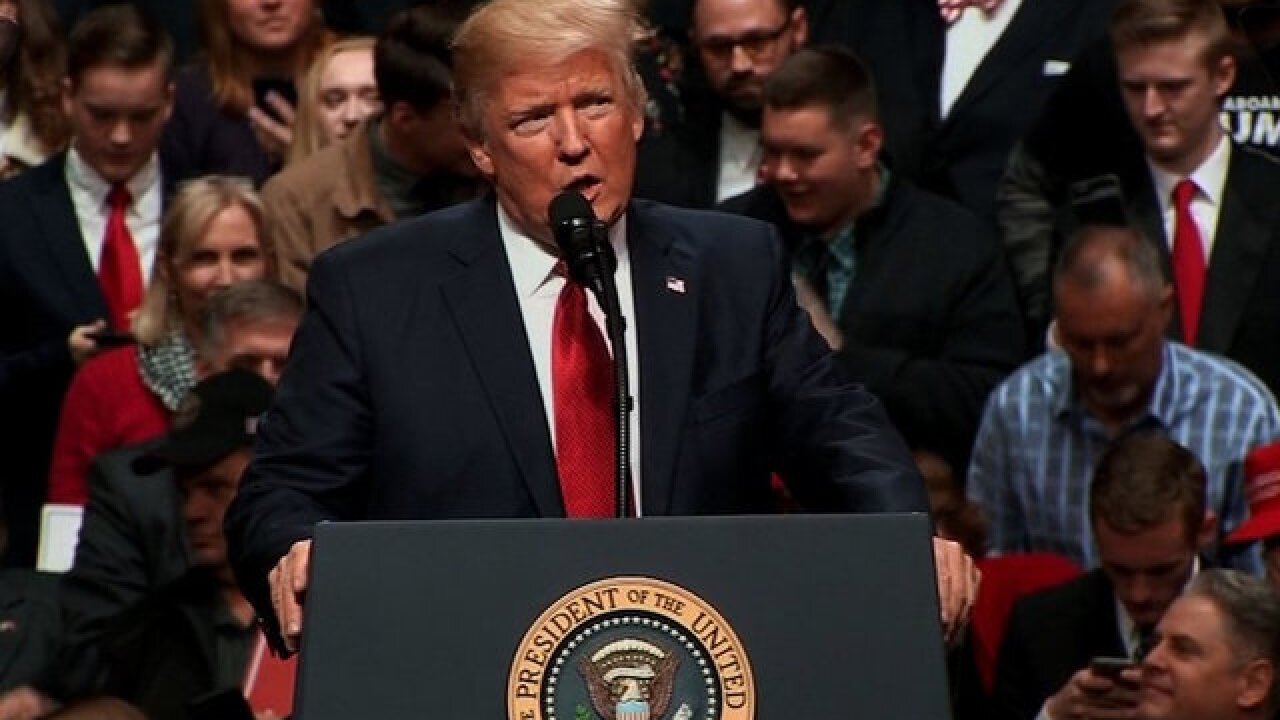 President Donald Trump released a $1.1 trillion budget outline Thursday that proposes a $54 billion increase in defense spending and corresponding cuts to non-defense spending at the State Department, the Department of Housing and Urban Development, the Environmental Protection Agency and the wholesale elimination of other federal programs.

Mick Mulvaney, Trump's director of the Office of Management and Budget, described the proposal as a "hard power budget" in a Wednesday briefing with reporters, meaning the Trump administration will prioritize defense spending over diplomacy and foreign aid.

The blueprint features the broad strokes of Trump's plan to dramatically remake the federal government, slashing EPA funds by 31 percent, State Department by 28 percent and HUD by 13.2 percent, while zeroing out funding for the Corporation for Public Broadcasting, the Institute of Museum and Library Services, the National Endowment for the Arts and the United States Institute of Peace, among others.

The proposal would also reduce funding for multinational organization like the World Bank by $650 million.

Presidential budget plans outline the administration's priorities but must be approved by Congress and are always changed in the process. The Trump administration will release its full budget in May.

"The core of my first budget blueprint is the rebuilding of our nation's military without adding to our federal deficit," Trump said in a letter attached to the budget.

House Speaker Paul Ryan, who will be tasked with working with the White House to push the proposal through Congress, applauded the budget.

"I welcome the President's blueprint for next year's budget, which turns the page from the last eight years," Ryan said. "I look forward to reviewing this with the Appropriations Committee and our entire conference."

"To dramatically increase spending on defense and significantly cut spending on the diplomats and development professionals that work hand in glove with our defense department in difficult and dangerous parts of the world like Iraq and Afghanistan is unwise," Sen. Chris Coons, D-Delaware, told CNN's Chris Cuomo on "New Day."

State Department
Secretary of State Rex Tillerson said Thursday in Japan that the budget cuts were made because "the level of spending that the State Department has been undertaking in the past, particularly in this past year, is simply not sustainable."

Though the plan increases funding to fortify US embassies abroad and provides $3.1 billion in commitments to Israel, it reduces US payments to the United Nation by slashing funding for climate change programs and UN peacekeeping and other international efforts.

Better World Campaign President Peter Yeo said Thursday that the cuts would "jeopardize US national security interests and compromise American leadership at the United Nations and around the world."

A US official told CNN earlier this month that cuts would come from the State Department's Bureau of International Organization Affairs and projects the fund programs at United Nations.

EPA
The budget makes good on a series of promises Trump made on the campaign trail, including reductions in the EPA in an attempt to "shrink the role of government" in American's lives.

Sources inside the EPA have told CNN that they anticipated at least 25% in budget cuts, and possibly deeper. Discussions were ongoing between the White House and the EPA for weeks regarding these cuts.

Mulvaney said Wednesday that "core functions of the EPA can be satisfied with this budget," but officials at the EPA disagree.

"The US EPA is already on a starvation diet, with a bare-bones budget and staffing level. The administration's proposed budget will be akin to taking away the Agency's bread and water," said John O'Grady, head of the union that represents EPA employees. "How can this administration tell America that we will have clean air and clean water with a 25% reduction in US EPA's budget?"

HUD
The $6.2 billion in HUD cuts come because of Trump's desire to "get rid of programs that don't work," Mulvaney said Wednesday.

"This budget reflects the President's commitment to fiscal responsibility while supporting critical functions that provide rental assistance to low-income and vulnerable households and help work-eligible families achieve self-sufficiency," the budget says. "The budget also recognizes a greater role for State and local governments and the private sector to address community and economic development needs."

By cutting the Community Development Block Grant program, one of the oldest programs at HUD, Trump is remaking how the department works with people.

The block grants that fund anti-poverty programs and affordable housing, Trump's budget states, "is not well-targeted to the poorest populations and has not demonstrated results."

Border wall
The budget blueprint is not a complete budget, meaning it does not include revenue projections, any impacts to mandatory spending and policy projections. But it does detail what Trump plans to spend his biggest 2016 campaign promise: Building a border wall along the US-Mexico border.

According to Mulvaney, the budget will include a request for $1.5 billion as the first installment payment for Trump's promised wall and then another installment of $2.26 billion in 2018.

Mulvaney said, though, that the White House was unable to answer how much the wall will eventually cost or how many miles it will cover.

In their first budget proposal, the White House announced in February that they planned to increase defense spending to $603 billion and decrease non-defense discretionary spending to $462 billion -- a swap of roughly $54 billion between the two government buckets.

Energy and Transportation
Despite proposing a sizable increase in infrastructure spending on the campaign trail and as President, Trump's budget proposes a 13 percent decrease in funding for the Department of Transportation, including reductions in federal subsidies to Amtrak.

Mulvaney said in a statement attached to the budget that the full budget released later in 2017 will include funding for infrastructure programs, but that is not clear in the budget blueprint.

The Trump administration also intends to provide the Energy Department with $120 million in funding to "restart licensing activities for the Yucca Mountain nuclear waste repository."

The spending effectively revives the politically perilous issue of storing nuclear waste in a facility 90 miles northwest of Las Vegas. Trump largely dodged questions on the issue during the 2016 campaign.