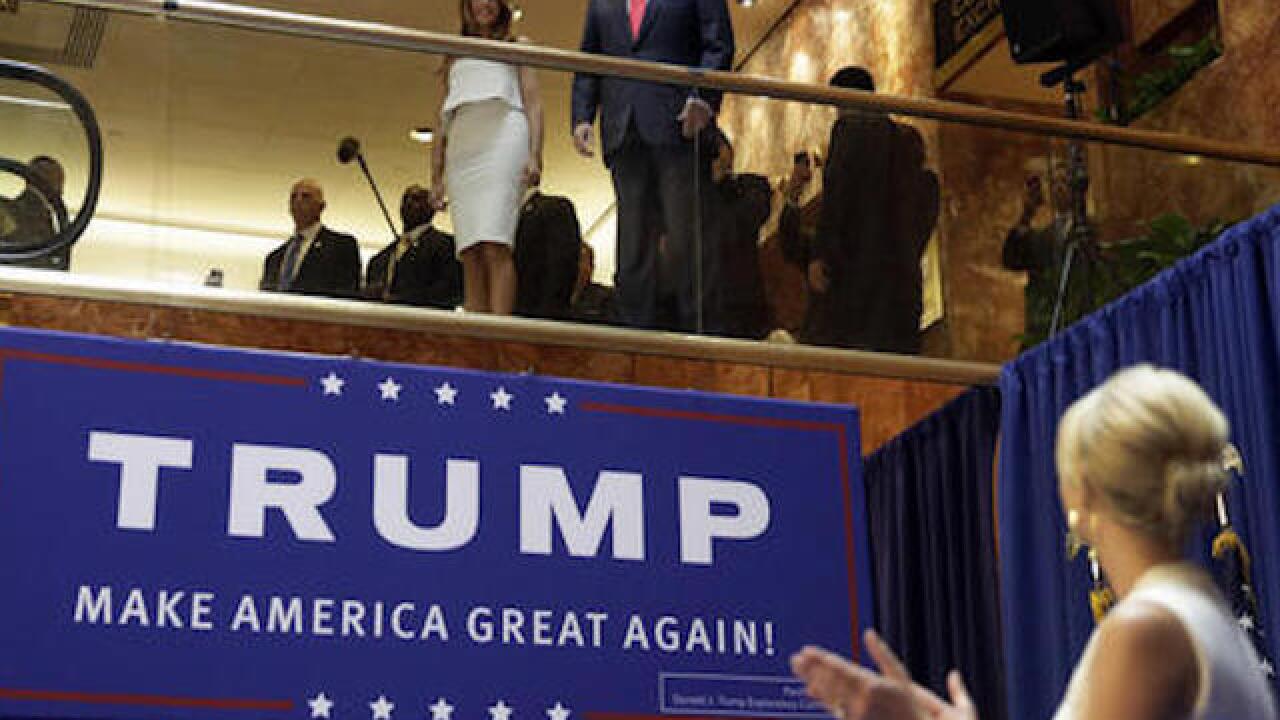 Copyright Associated Press
Richard Drew
<p>In this June 16, 2015, file photo, Donald Trump, accompanied by his wife Melania Trump, is applauded by his daughter Ivanka Trump, right as he's introduced before his announcement that he will run for president in the lobby of Trump Tower in New York. In AP’s delegate count, Donald Trump surpassed the number needed to give him the nomination. That essentially closed out a raucous race on a quiet note, as a small number of unbound delegates put him over the top by telling AP they had decided to support him. (AP Photo/Richard Drew)</p>

WASHINGTON (AP) — Donald Trump said Monday it was "inappropriate" for Newt Gingrich to demand he drop the subject of an American judge's ethnicity and start acting like "a potential leader of the United States." But Trump did not comment on the other Republican leaders' unanimous call for him to lay off the jurist, a sign that the GOP presidential candidate doesn't want to blow up the fragile truce he has struck with them.

"You have to respond," Trump said on Fox News. "All I'm trying to do is figure out why I'm being treated so unfairly by a judge."

A day earlier, Gingrich said Trump's focus on Curiel's ethnic background was "inexcusable" and Trump's "worst mistake." He was one of several Republicans who publicly demanded that the presumptive GOP candidate move on and unite the party. Across the Sunday talk shows, Senate Majority Leader Mitch McConnell said that he "couldn't disagree more" with Trump's statements about Curiel's impartialilty, adding that "we're all behind him now" — an implicit warning that such unity might not be the case for long.

Senate Foreign Relations Committee Chairman Bob Corker said he doesn't condone Trump's statements about Curiel, then complained that his interview was supposed to be about foreign policy.

The message was repeated Monday, this time from House Oversight and Government Reform Chairman Jason Chaffetz.

"Why doesn't he just say, 'look it's up to the attorneys' ... and leave it at that?" Chaffetz said on Fox News Channel. "And then you move on."

Their remarks solidify the line GOP leaders have drawn in recent days between themselves and Trump, with whom they've made a fragile peace over their shared sense that almost anyone would be a better president than Democrat Hillary Clinton.

Trump University is the target of two lawsuits — in San Diego and New York — which accuse the business of fleecing students with unfulfilled promises to teach secrets of success in real estate. Trump has maintained that customers were overwhelmingly satisfied. Trump's legal team has not sought to have Curiel removed.

Trump already has rejected calls for him to adjust his approach.

"I'm not changing," he said Tuesday at a fiery news conference at Trump Tower.

On Sunday, Trump doubled down on the idea. Asked on CBS whether a Muslim judge would be unfair given Trump's plan to ban Muslims from the U.S, Trump responded: "Yeah. That would be possible, absolutely."

That puts Trump in significant conflict with the Republicans he hopes to lead — including many of the ones who have opted to support him.

For a party that in 2012 explicitly pinned its survival on drawing support from Hispanics, Trump's words create an ugly series of headaches.

Asked three times whether Trump's attack on Curiel was racist, McConnell thrice refused to respond directly and repeated a statement about disagreeing.

"I think it's a big mistake for our party to write off Latino Americans," said McConnell, R-Ky.

Like Ryan, all of the Republicans delivering the move-on message to Trump have endorsed him. But their comments carried the implicit caveat that their support depends at least in part on Trump dropping his criticism of Curiel. All three also suggested ways Trump could move beyond his legal issues.

Corker, who recently met with Trump in New York, said Trump "has a tremendous opportunity" to build out his foreign policy agenda.

Gingrich urged Trump to become more of a statesman.

"Trump has got to, I think, move to a new level," he said. "This is no longer the primaries. He's no longer an interesting contender. He is now the potential leader of the United States and he's got to move his game up to the level of being a potential leader."

"This is a good time, it seems to me, to begin to try to unify the party and you unify the party by not settling scores and grudges against people you've been competing with," he said. "I'd like to see him reach out and pull us all together and give us a real shot at winning this November."