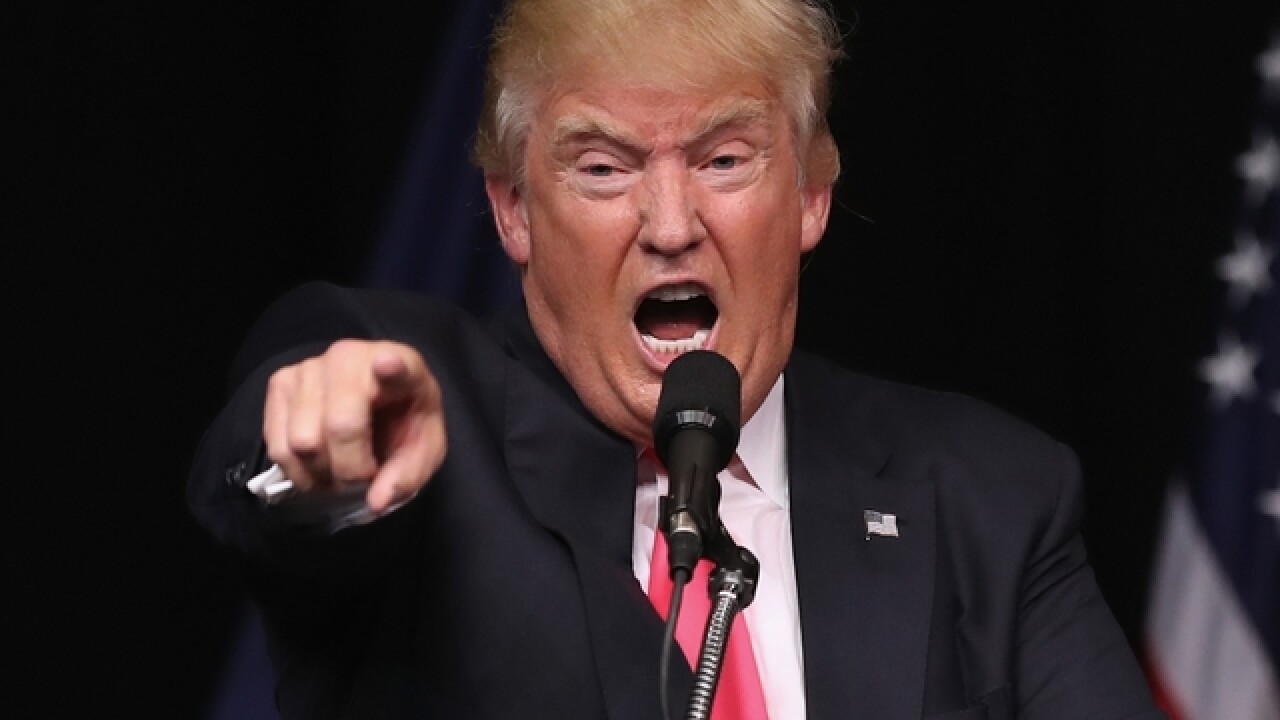 By: Associated Press
Posted at 1:57 AM, Aug 01, 2016
CLEVELAND (AP) — As he turns his attention to the general election, Donald Trump is signaling that he is ready to tone down his fiery rhetoric on illegal immigration — at least behind closed doors.
At the same time, Republican officials appear eager to push him in a more moderate direction, telling Hispanics that he has abandoned his divisive primary pledge to deport the estimated 11 million people living in the country illegally — even if Trump hasn't said so publicly himself.
"Trump has already said that he will not do massive deportations," Helen Aguirre Ferre, the Republican National Committee's director of Hispanic communications, told reporters at a Spanish-language briefing at the party's convention two weeks ago. Instead, she said, "he will focus on removing the violent undocumented who have criminal records and live in the country."
It's a statement that may come as a surprise to Trump's legion of loyal followers, many of whom were first drawn to Trump because of his hard-line views on immigration and border security. Trump has vowed to build a wall along the length of the southern border and use a "deportation force" to track down and deport anyone in the country illegally.
"You're going to have a deportation force, and you're going to do it humanely," Trump said in a TV interview last fall. He estimated in a separate interview that the process would take between 18 months to two years.
But those who would like to see Trump move in a more inclusive direction say that Trump has indicated that he no longer advocates that plan. As evidence, they point to several vague sentences from an interview Trump gave earlier this summer to Bloomberg News during a whirlwind trip to Scotland to visit his golf courses.
"President Obama has mass deported vast numbers of people — the most ever, and it's never reported. I think people are going to find that I have not only the best policies, but I will have the biggest heart of anybody," Trump told the outlet. Pressed on whether he would issue "mass deportations," Trump responded: "No, I would not call it mass deportations."
"We are going to get rid of a lot of bad dudes who are here," he was quoted as saying.
It remains unclear whether Trump was taking rhetorical or ideological issue with the phrase, and Trump has not made similar comments at any point since. Asked how he would manage the deportations at a press conference in Florida Wednesday, Trump said only, "We're going to have a whole policy on that over the next three weeks."
This kind of ambiguity is not unusual for Trump, whose vague statements often leave room for numerous, sometimes conflicting interpretations.
But for some who are supporting Trump and want to see him moderate, the meaning is clear.
"Two or three weeks ago, (Trump) conceded in an interview in Bloomberg in which he said the term 'massive deportation' is not used by him, and it was planted by a journalist," said the head of Latino Partnership for Conservative Principles, Alfonso Aguilar, who recently signed a letter along with several other Latino conservatives endorsing Trump.
Aguilar said that he had seen in Trump's comments "something very interesting, which can be the beginning of an openness toward the center on immigration. He said he wants to remove only people with criminal record, not people without criminal record. It could be the openness toward a legalization."
A similar interpretation has also developed among Hispanic and religious leaders who have met with Trump privately in recent months. Trump, they say, has been signaling that he is open to embracing a less punitive immigration policy that focuses on "compassion" along with the rule of law. Seizing on what they see as an opportunity to steer the candidate, several have formed an informal advisory committee that has been working on a series of recommendation they hope Trump will consider.
"He realizes that there are a lot of good people that are in the shadows. He wants some proposals on how to work on that," said Ohio-based televangelist Frank Amedia, who is helping to lead the effort.
Hillary Clinton told "Fox News Sunday" that her priority if elected would be to deport violent criminals and those linked to terrorism.
"But don't go rounding up hard working mothers and fathers, taking them out of the factories or the hotels or the homes where they're working, making them disappear and leaving their children alone," she said. "That doesn't make any sense to me."
A record 27.3 million Latinos will be eligible to vote in the 2016 presidential elections, according to the Pew Research Center. While much of Trump's backing comes from white males, he could gain an advantage in a tightening race if he makes gains with this critical demographic.
Trump, Amedia said, has expressed interest in a plan that would quickly deport "the undesirables" from the country. But the group has also been exploring various options to deal with the millions of otherwise law-abiding immigrants living in the shadows, who are often afraid to report crimes or abuse for fear of deportation.
"It's not satisfactory for them to stay in that position," Amedia said. "They too need to have a recourse where they can walk out of the shadows and into the light."
Pastor Herman Martir, the president Asian Action Network, who is also involved in the effort, said that after meeting recently with the candidate to discuss his community's concerns, he expects to see a "change of tone in terms of being inclusive."
"I think because of that dialogue, he understood the need to put together something that will work for everybody," he said. "The approach is more compassionate, not so much about gathering everyone and pushing them aside and turning them back."
Copyright 2016 The Associated Press. All rights reserved. This material may not be published, broadcast, rewritten or redistributed.