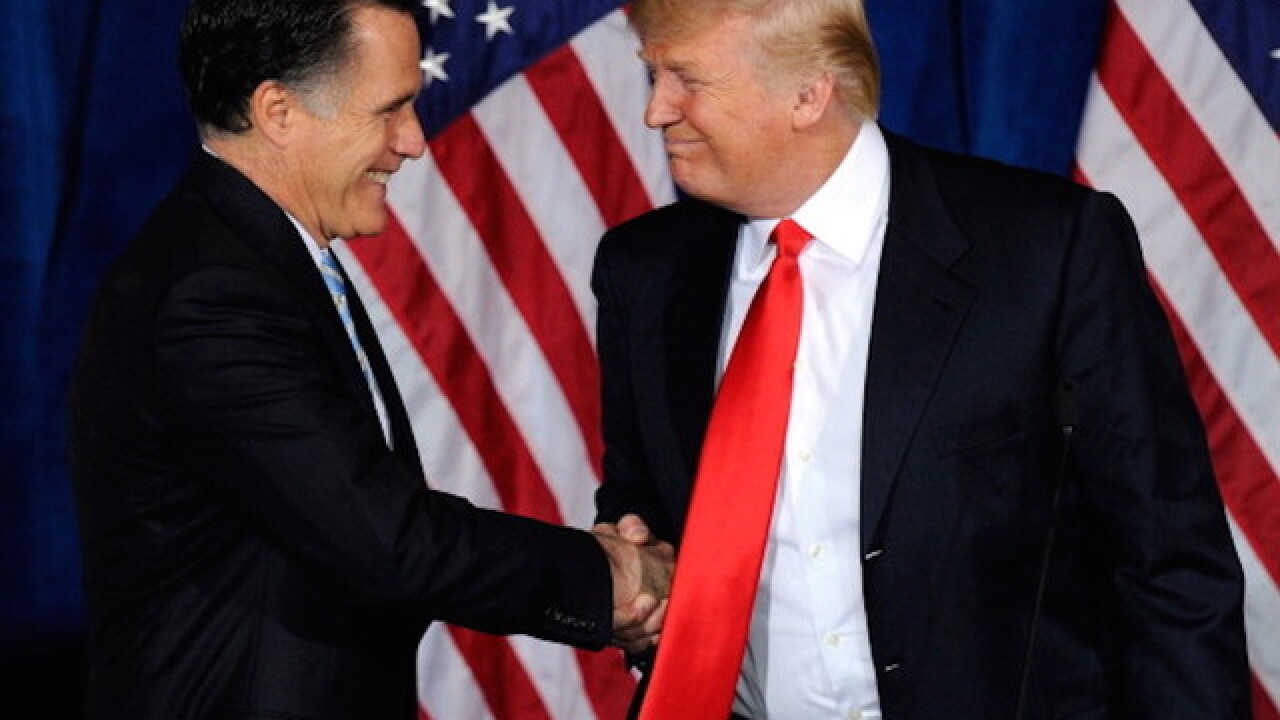 BEDMINSTER, N.J. (AP) — President-elect Donald Trump and Mitt Romney met Saturday at the billionaire's golf club in New Jersey, both emerging with smiles and a public handshake but no word on what, if any, role the 2012 GOP hopeful might play in the new administration.

Trump flashed a thumbs-up said the sit down "went great." Romney said the two had a "far reaching conversation with regards to the various theaters in the world where there are interests of the United States of real significance."

The meeting alone was notable after the crackling rancor between the men all year.

Romney assailed Trump in a stinging speech in March, calling him a "con man" and a "phony." Trump responded by calling Romney a "loser" who "choked like a dog" during the 2012 election and let President Barack Obama win.

But the two have started to make amends since the election. Romney called Trump to congratulate him after his victory over Democrat Hillary Clinton.

Romney was only one of a parade of officials pouring through Trump' door as the president-elect tries to fill more members of his administration. On Friday, Trump picked Alabama Sen. Jeff Sessions for attorney general and Kansas Rep. Mike Pompeo to head the CIA, signaling a sharp rightward shift in U.S. security policy as he begins to form his Cabinet. Trump also named retired Lt. Gen Michael Flynn as his national security adviser.

Hosting the stream of visitors wasn't Trump's first public act of the day. First, there was Twitter.

He rushed to the defense of Mike Pence on Saturday after "Hamilton" actor Brandon Victor Dixon challenged the incoming vice president from the Broadway stage after the show Friday night. "Apologize!" Trump tweeted to the actor. "Our wonderful future V.P. Mike Pence was harassed last night at the theater by the cast of Hamilton, cameras blazing. This should not happen!"

Dixon tweeted back: "Conversation is not harassment sir. And I appreciate @Mike_Pence for stopping to listen."

Trump also bragged on Twitter about agreeing to settle a trio of lawsuits against Trump University, claiming: "The ONLY bad thing about winning the presidency is that I did not have the time to go through a long but winning trial on Trump U. Too bad!"

Trump then turned to meetings, perhaps about posts in his administration.

Trump's announcement on Friday of Sessions, Pompeo and Flynn formed the first outlines of Trump's Cabinet and national security teams. Given his lack of governing experience and vague policy proposals during the campaign, his selection of advisers is being scrutinized both in the U.S. and abroad.

Trump's initial decisions suggest a more aggressive military involvement in counterterror strategy and a greater emphasis on Islam's role in stoking extremism. Sessions, who is best known for his hard line immigration views, has questioned whether terrorist suspects should benefit from the rights available in U.S. courts. Pompeo has said Muslim leaders are "potentially complicit" in attacks if they do not denounce violence carried out in the name of Islam.

Pompeo's nomination to lead the CIA also opens the prospect of the U.S. resuming torture of detainees. Trump has backed harsh interrogation techniques that President Barack Obama and Congress have banned, saying the U.S. "should go tougher than waterboarding," which simulates drowning. In 2014, Pompeo criticized Obama for "ending our interrogation program" and said intelligence officials "are not torturers, they are patriots."

Sessions and Pompeo would both require Senate confirmation; Flynn would not.

In a separate matter Friday, it was announced that Trump had agreed to a $25 million settlement to resolve three lawsuits over Trump University, his former school for real estate investors. The lawsuits alleged the school misled students and failed to deliver on its promises in programs that cost up to $35,000.

Trump has denied the allegations and had said repeatedly he would not settle. New York Attorney General Eric Schneiderman, who announced the settlement, called it "a stunning reversal by Donald Trump and a major victory for the over 6,000 victims of his fraudulent university."

Trump tweeted to his 15 million followers Saturday that he only settled to better focus on leading the U.S.