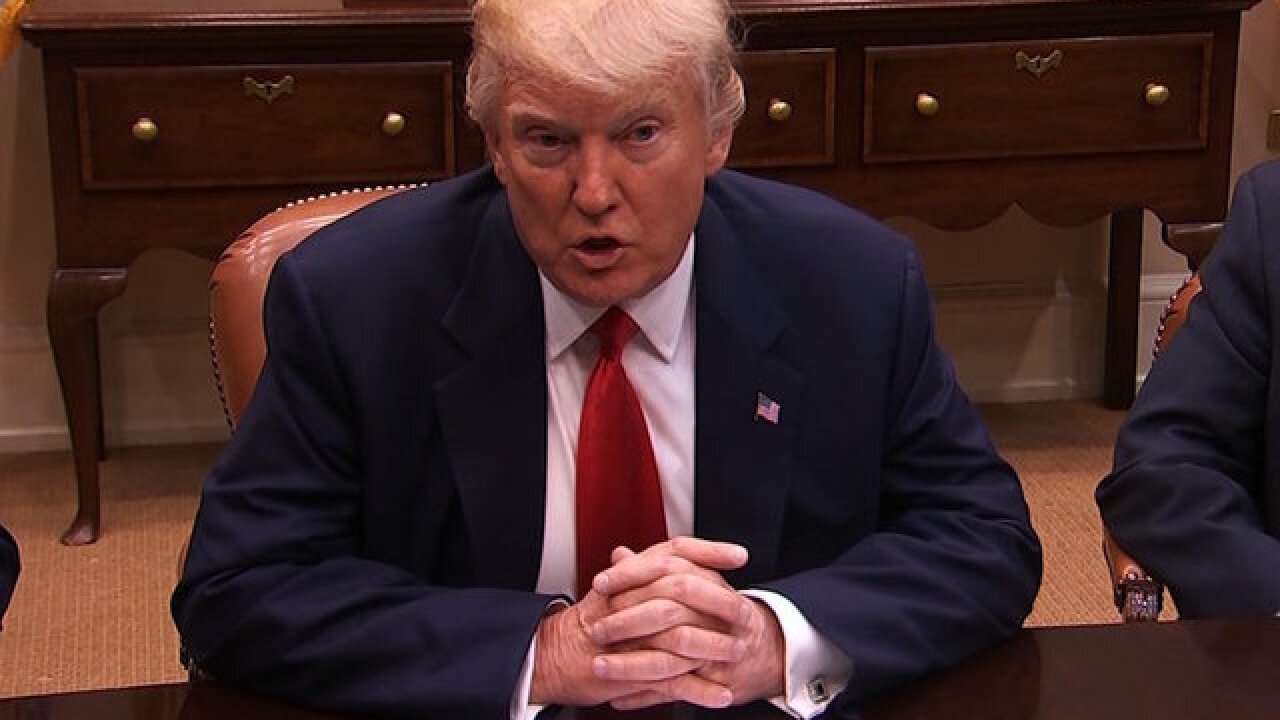 © 2017 Cable News Network, Inc.
Pool
<p>President Trump promised the nation's leading health insurers that his administration will work with them to stabilize the Obamacare markets and smooth the transition to the Republicans' plan for health care as he talked to health insurers at the White House on Monday, Feb. 27, 2017.</p>

WASHINGTON (CNN) -- President Donald Trump is set to deliver his first address to a joint session of Congress on Tuesday night -- where he's expected to make the case for a budget that boosts defense spending and slashes funding for agencies.

The speech -- a "State of the Union" address in all but the name -- will be Trump's biggest national audience since his swearing-in ceremony, a chance to try to bring the nation together and sell his agenda on Capitol Hill.

At a private dinner for a small group of reporters that included three reporters from The E.W. Scripps Company, Trump hinted there will be some controversial statements in Tuesday's address.

Here's what to watch for Tuesday night:

Dark and dystopian has been this President's style.

His Republican National Convention speech painted a picture of a struggling nation in need of rescue. His inaugural address described "American carnage" and declared that "from this day forward, it's going to be only America first."

Now, though, Trump is in the Oval Office -- which means the nation's successes and failures are on him.

A rash of threats against Jewish centers have led to calls for Trump to unify the nation and move away from his harsh campaign-style tone.

Will Trump do that? Or will he stick with his recent tactics of touting his election victory, bashing the media and lambasting Democrats?

The White House says the theme of the speech is "Renewal of the American Spirit -- an optimistic vision for All Americans," a senior administration official said.

"If it's anything like the inaugural address, I think it will be a sad evening for the country," House Minority Leader Nancy Pelosi, D-California, said Monday.

The most important audience for Trump's speech will be the House and Senate Republicans in the audience.

He's asking them to approve major domestic spending cuts at federal agencies, as well as enacting a major reform of the tax code and repealing and replacing Obama's Affordable Care Act.

The problem is that Republicans are not on the same page on any of those measures, especially how to pay for everything.

There's debate about how Trump will pay for his US-Mexico border wall. The health care issue has proved problematic as the GOP attempts to hammer out a replacement plan. And lawmakers appear to have little appetite for the increase in spending that Trump's calls for a $1 trillion investment in infrastructure would require.

Trump could use his speech to make clear exactly what he wants and give Republicans a specific policy to rally around.

Or he could opt to stay away from specifics and preserve his ability to take whatever Congress can ultimately give him.

But Republicans have stumbled over questions about whether they'll maintain coverage for everyone who gained it under Obamacare.

"Nobody knew that health care could be so complicated," Trump said Monday at a meeting with governors.

That, of course, isn't true -- health care policy has proven extremely complicated for years on Capitol Hill, and Republicans who voted dozens of times to repeal Obamacare had never truly crafted a workable replacement.

Adding to the pressure is the stiff opposition many GOP lawmakers are facing to their effort to repeal the law at town halls in their districts.

"People hate it, but now they see that the end is coming, and they're saying, 'Oh, maybe we love it,'" Trump said Monday. "There's nothing to love. It's a disaster, folks."

Trump is set to call for a budget that includes $54 billion in increases to defense spending -- and a corresponding $54 billion in cuts to federal agencies.

The cuts would particularly target the Environmental Protection Agency and foreign aid.

"Yes, it is a fairly small part of the discretionary budget, but it is still consistent with what the President said," Trump budget director Mick Mulvaney said of the foreign aid cuts. "We are taking his words and turning them into polices and dollars."

There are landmines surrounding that budget proposal, though.

On the left, Trump faces Democrats who will be furious about the domestic cuts and will see his calls for a reduction in foreign aid as undermining US diplomacy.

On the right, Trump will encounter defense hawks like Arizona Sen. John McCain who are saying that he is still leaving the military underfunded.

Trump provoked anger across the political spectrum with his move to ban travel to the United States from seven majority Muslim nations.

Tuesday night represents a chance for Trump to sell a revised executive order his administration has prepared.

Democrats are using the evening to highlight Trump's travel ban as well as increases in immigration raids. Several lawmakers are bringing guests who have been impacted by the White House actions.

New York Democrat Rep. Nydia Velazquez, for instance, has invited Hameed Darweesh to the speech. Darweesh assisted US forces in Iraq and relocated to the US on a special immigrant visa with his family just as Trump was beginning his presidency, and was detained at New York's John F. Kennedy Airport when the ban went into effect.

Trump has yet to put his "America first" vision of foreign policy into practice -- but he could flesh out the details Tuesday night.

The President made big campaign promises to take on ISIS, and ordered up a plan from military brass. He has not yet publicly unveiled any changes to the US approach in Iraq and Syria.

Meanwhile, lawmakers are investigating Russian efforts to influence the election. Trump personally has been unwilling to criticize Russian President Vladimir Putin, even as his representatives -- including UN ambassador Nikki Haley -- have taken tougher approaches.

As Trump seeks an increase in defense spending, lawmakers are likely to seek more details on how he sees the US role in the world and where he would spend the additional funding.

In 2009, Republican Rep. Joe Wilson of South Carolina famously shouted "you lie!" as President Barack Obama told the nation in a joint address to Congress that his health care plan would not cover undocumented immigrants.

The outburst -- highly unusual for such an occasion -- underscored the heightened emotions of the moment.

Democrats are under intense pressure from their progressive base to oppose Trump at every turn. Many in the party are furious at Trump. That anger could erupt into a Wilson-like moment.