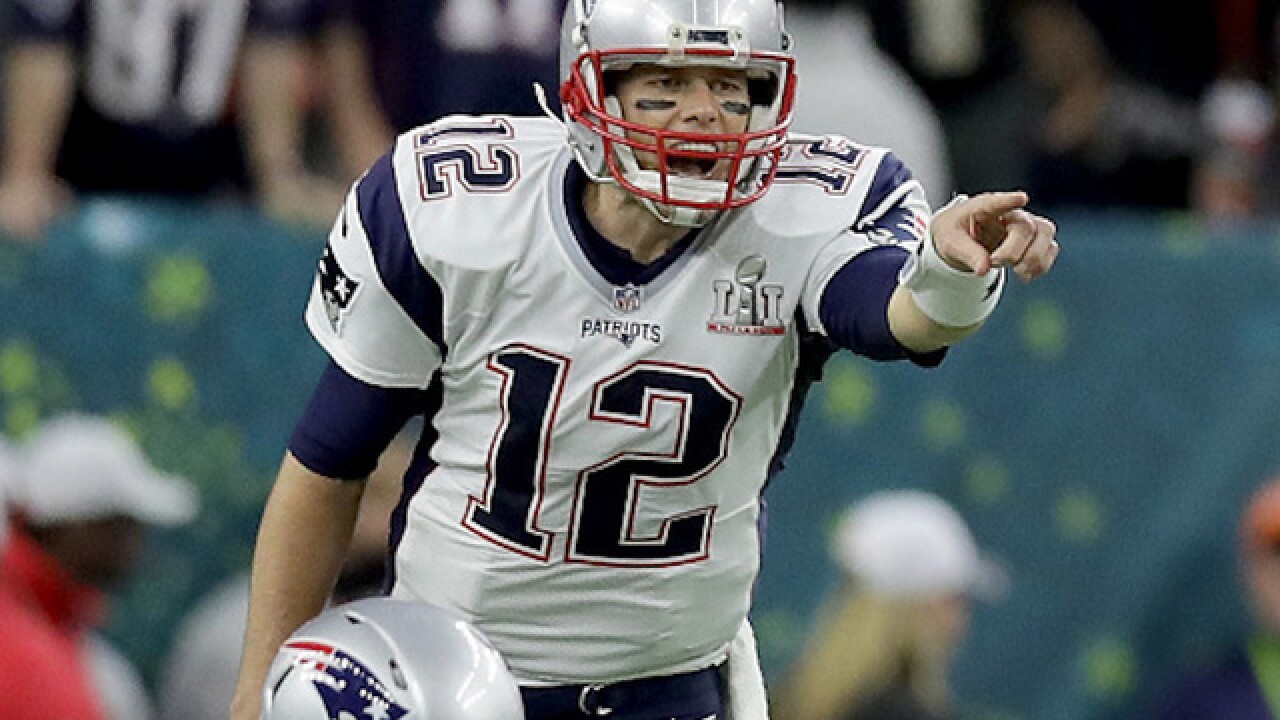 Copyright 2017 Scripps Media, Inc. All rights reserved. This material may not be published, broadcast, rewritten, or redistributed.
Ronald Martinez
<p>HOUSTON, TX - FEBRUARY 05: Tom Brady #12 of the New England Patriots in action against the Atlanta Falcons during Super Bowl 51 at NRG Stadium on February 5, 2017 in Houston, Texas. (Photo by Ronald Martinez/Getty Images)</p>

"The items were found in the possession of a credentialed member of the international media," an NFL statement said.

According to the league, the jerseys were recovered through the cooperation with the NFL and New England Patriots' security teams, the FBI and other law enforcement authorities.

In the locker room following the New England Patriots' win over the Atlanta Falcons in Super Bowl LI at NRG Stadium in Houston, Brady noticed his No. 12 jersey was missing after he said he had put it in his bag. The estimated value of the jersey is $500,000, according to a police report released in February by the Houston Police Department.

The recovery also netted the jersey Brady wore in 2015 to defeat the Seattle Seahawks in Super Bowl XLIX, which took place at University of Phoenix Stadium in Glendale, Arizona.

In a press conference Monday, Houston Police Chief Art Acevedo said he anticipates that charges will be brought against the suspect. Acevedo didn't name the suspect, but did say that he did not live in Houston.

Acevedo also said the jersey Brady wore at Super Bowl LI in Houston now is in Boston and is in the care of the NFL and FBI. Tests are ongoing to verify the authentication of the jerseys.

"We're highly confident that these are in fact the jerseys based on investigative efforts and based on all the information that these fine men and women of our police department uncovered," Acevedo said.

Acevedo said police received a tip from an informant in Houston that led investigators to Mexico. In conjunction with FBI and Mexican authorities, they went to the suspect's known address and found the two jerseys.

Acevedo said that while this case was not a priority, this was the "only blemish" on the Houston Police Department on the Super Bowl.

"You don't come to Texas and embarrass us here on our home turf," he said.

And there may be more. According to the NFL, a Denver Broncos' helmet was retrieved as part of the on-going investigation. The Broncos defeated the Carolina Panthers in Super Bowl 50 at Levi's Stadium in Santa Clara, California, in February 2016, and the helmet of Broncos outside linebacker Von Miller, who was named Super Bowl MVP, went missing.

When asked about the Broncos' memorabilia, Acevedo said he was not aware of that.

Brady is the first quarterback to win five Super Bowl titles. He was named Super Bowl MVP for the fourth time, the most all time, in his victory over the Falcons.