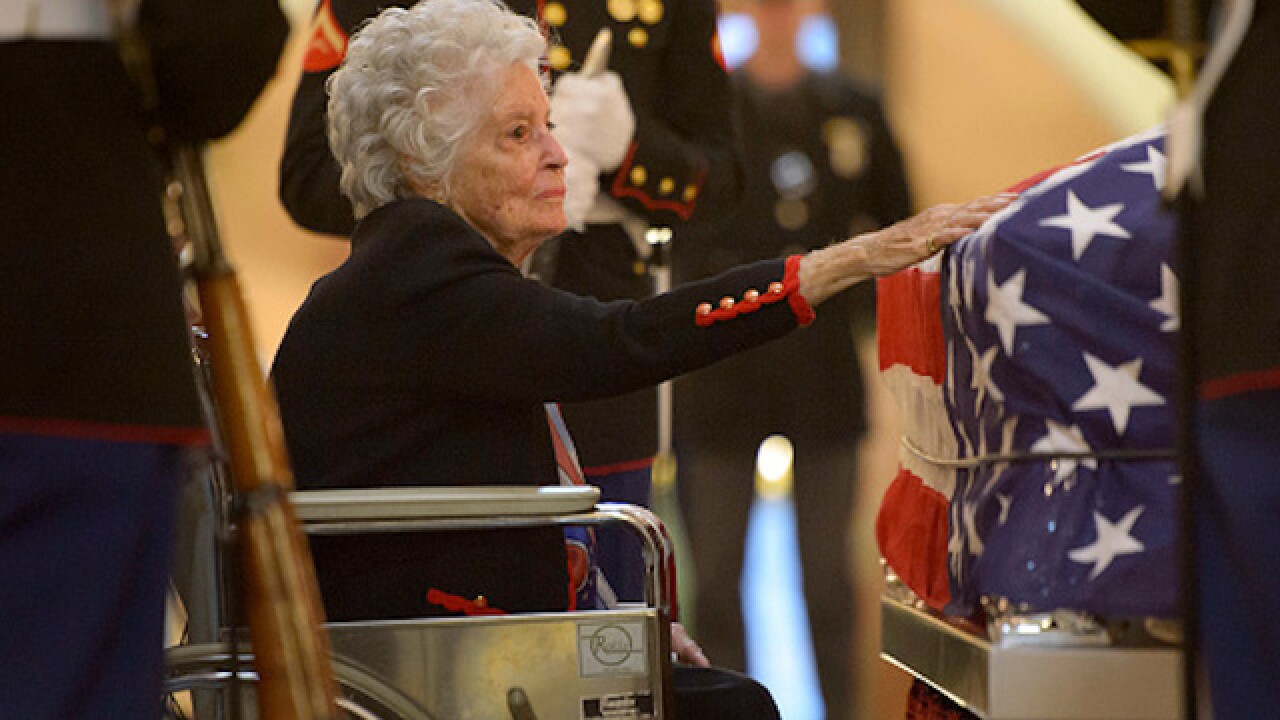 Copyright Getty Images
Bill Ingalls/NASA
<p>COLUMBUS, OH - DECEMBER 16: In this handout provided by the National Aeronautics and Space Administration (NASA), Annie Glenn, widow of former astronaut and Senator John Glenn, pays her respects to her late husband as he lies in repose, under a United States Marine honor guard, in the Rotunda of the Ohio Statehouse December 16, 2016 in Columbus, Ohio. Glenn, who died at age 95, was the first American to orbit the Earth. He will be honored in a memorial service at Ohio State University's Mershon Auditorium. (Photo by Bill Ingalls/NASA via Getty Images)</p> 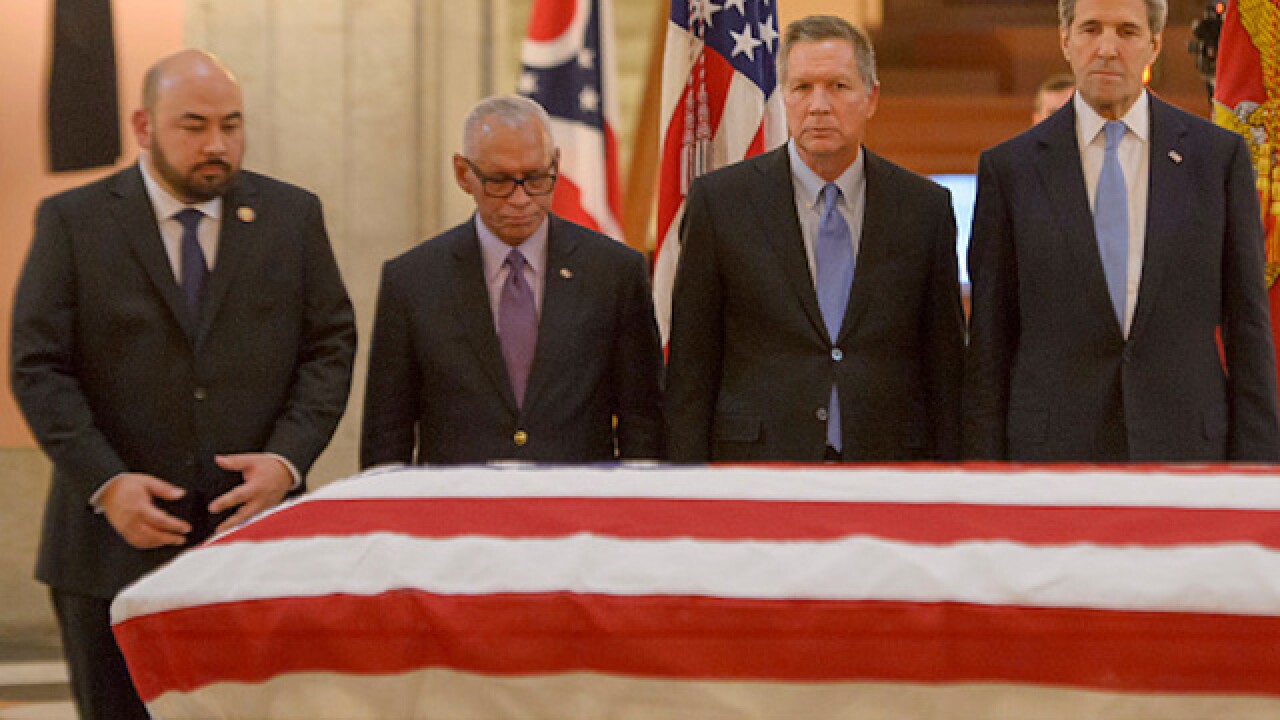 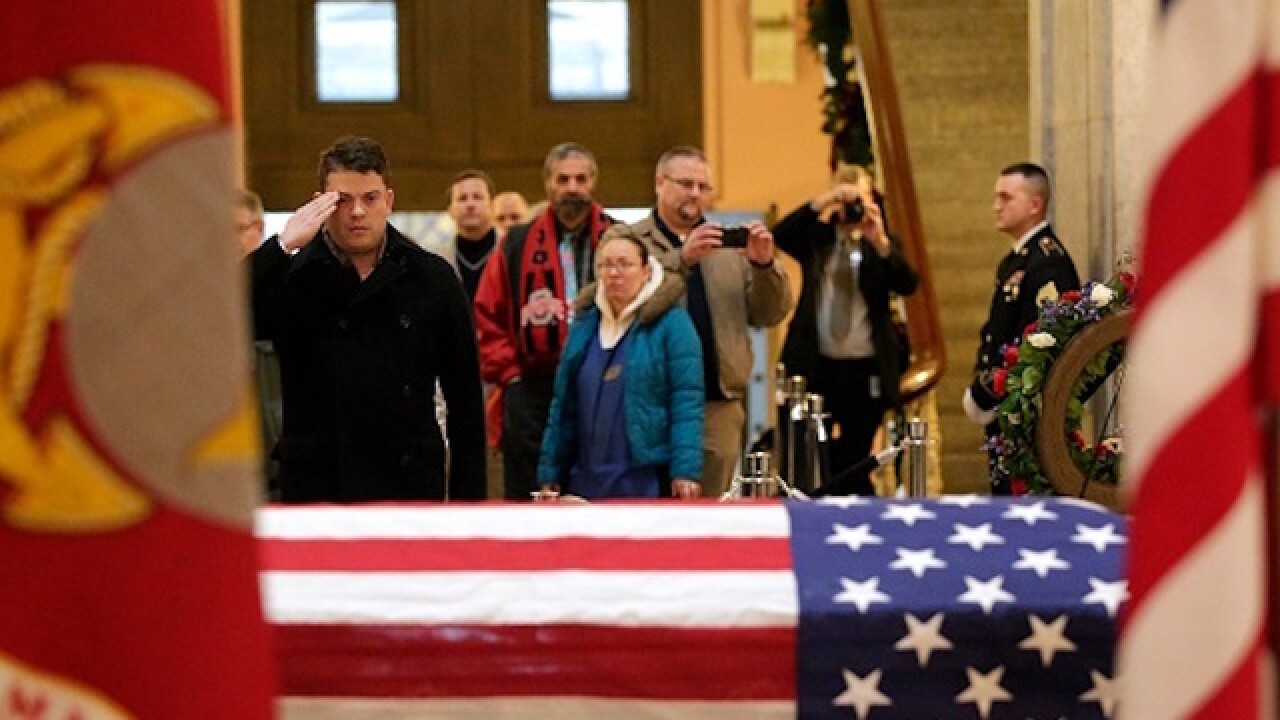 A line of thousands stood still Friday afternoon in the Ohio Statehouse rotunda when Annie Glenn reached out of her wheelchair to feel the flag-draped coffin of her husband of 73 years.

Glenn spent nearly her entire adult life married to John Glenn, a man who has been hailed as a true American hero. The two-time astronaut and four-term US senator from Ohio passed away in Columbus last week at the age of 95

John Glenn's body lain in state Friday in the Ohio Statehouse. Members of the general public passed through all afternoon and evening to honor Glenn.

Annie Glenn, surrounded by five Marines looking over her husband's coffin, quietly bowed her head while a crowd of well-wishers stood by. Once she moved away from the coffin, the line continued past the coffin.

Glenn is just the ninth person to lie in state in Ohio's Capitol, and the first since the state's Speaker of the Senate Paul Gillmor passed away in 2007.

An accomplished fighter pilot, Glenn became the first American to orbit the Earth in 1962. After decades of military service, Glenn decided to run for public office. After being narrowly defeated in a Democratic Party primary for Senate in 1970, Glenn won a second attempt at office in 1974. Glenn went on to serve Ohio in the US Senate for 24 years.

At the end of his fourth term in the Senate, Glenn returned to space at age 77.

Glenn's name is also synonymous with Ohio State as his name is on the John Glenn College of Public Affairs.

Glenn will be memorialized Saturday at the Ohio State University after being transferred in a procession from the Ohio Statehouse through the center of Columbus.