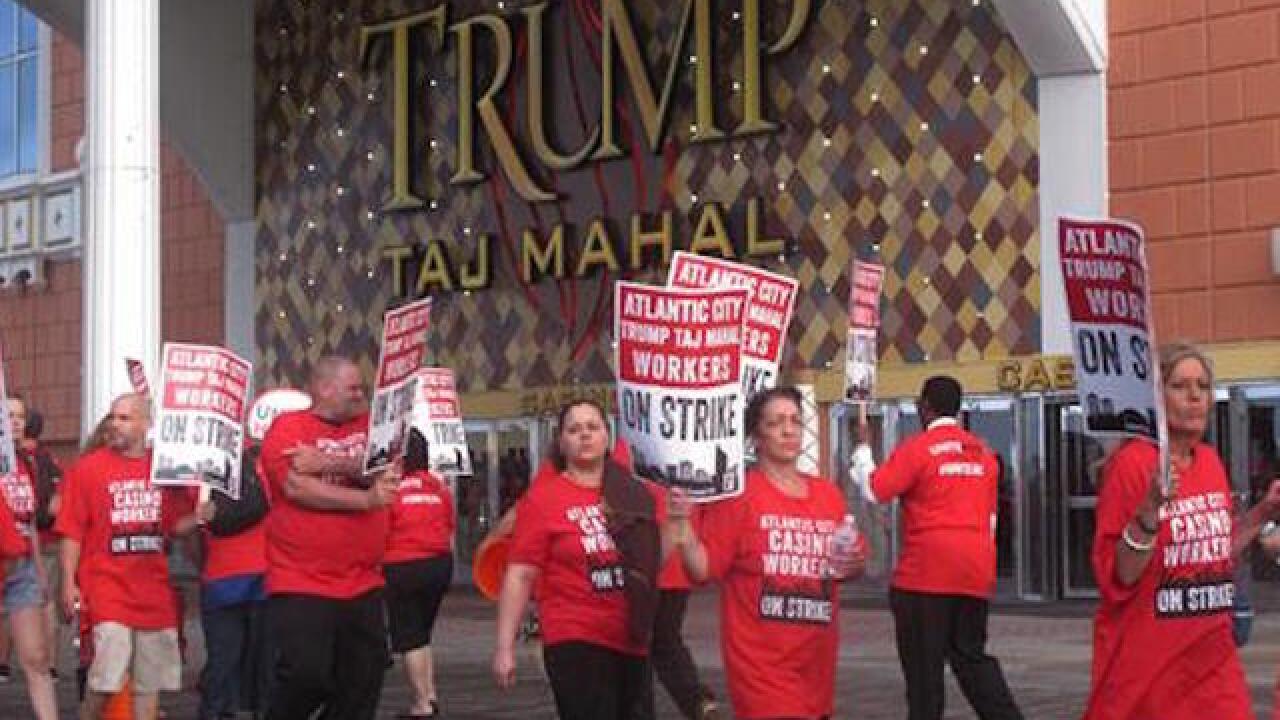 ATLANTIC CITY, N.J. (AP) — A strike against Atlantic City's Trump Taj Mahal casino entered its second day Saturday with both sides appearing confident they could outwait the other and prevail in the bitter dispute that has seen 1,000 union members walk off the job and has raised fresh questions about the future of the struggling gambling resort.

Local 54 of the Unite-HERE union went on strike Friday morning against the casino, which was opened by Donald Trump but now belongs to his friend and fellow billionaire, Carl Icahn.

As noisy picketers banged drums, blew whistles and blared portable sirens outside, managers were carrying luggage inside the hotel, and guests continued to come and go during the Fourth of July weekend, which is traditionally the busiest of the year for Atlantic City casinos.

"We are still excited and worked up," said Mayra Gonzalez, a cook at the Taj Mahal for 26 years. "The mood is going to last for days, I'm sure. We're getting a lot of support from people walking by on the boardwalk, asking us questions about what's going on. I feel good about this."

Ana Diaz, a housekeeper for the casino, said she'll be out picketing as long as it takes.

"We need our health insurance back," Diaz said. "It's not fair. Housekeeping is a hard job, and this has been hard on our families."

Taj Mahal management urged guests to come to the property, promising they would be well cared for.

"Despite the labor action, the Taj Mahal remains open for business and is fully functioning," said Alan Rivin, the casino's general manager. "We have strike contingency plans in place and are prepared to welcome our guests and continue to provide everyone first-class accommodations and entertainment this weekend and throughout the summer. We expect the strike to have minimal impact on our operations. The place looks great and we have a full slate of entertainment and activities planned for the weekend."

Officials would not go into detail about their staffing arrangements during the strike. On strike include those that serve drinks, cook, transport luggage, clean rooms and more. Casino dealers and security are not part of the union striking.

Despite signs posted on the boardwalk by the union asking the band to honor picket lines, the hair metal band Whitesnake performed at the Taj Mahal Friday night. In a possible reference to the strike, singer David Coverdale told the crowd at the conclusion of the show, "Be safe, be happy and don't let anyone make you afraid!"

The union said no further contract talks are scheduled.

White it still bears his name, Trump, the presumptive Republican presidential nominee, has not owned it for years. The bankruptcy filing and the benefit terminations at the Taj Mahal happened five years after Trump relinquished control of the casino and its parent company, Trump Entertainment Resorts to bondholders in a previous bankruptcy.

Aside from a 10 percent stake in the company for the use of his name that was wiped out in bankruptcy when Icahn took over in March, Trump has had no involvement with the company since 2009.