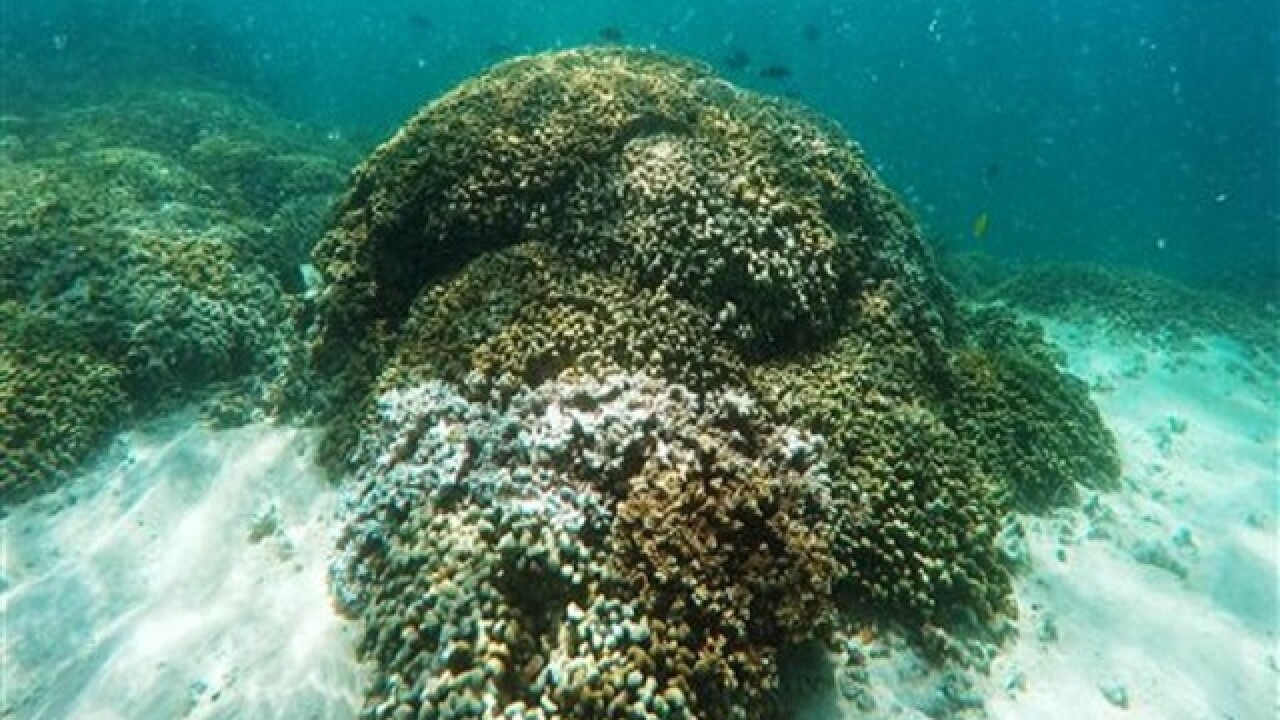 The Earth's coral reefs, some of the most diverse and valuable ecosystems in the world, are facing a number of serious threats. Beyond large-scale events like climate change, local stressors, including persistent sunscreen pollution, are contributing to their destruction, experts say.

While coral communities can be found at varying depths, shallow-water reefs occupy approximately 110,000 square miles of the sea floor, roughly the size of Nevada -- according to data compiled by the National Oceanic and Atmospheric Administration. In some cases, coral reefs have been shrinking dramatically.

Several on Maui, in the Hawaiian Islands, lost nearly 25% of their living coral between 1994 and 2006, "primarily as a result of human influence," Hawaii's Department of Land and Natural Resources said. The most dramatic decline was at Honolua Bay, in Maui, where coral cover dropped from 42% to 9%.

These reefs, which require clear water and sunlight to fuel energy production through photosynthesis, support more marine species than any other undersea habitat, while sustaining nearly half a billion people as sources of food and income, including tourism. In Hawaii, for instance, 60% of the state's tourist income comes from reef visitors.

Tourism can have significant negative impacts on coastal destinations near the world’s coral reefs. In many cases, local infrastructure is strained, waste treatment is mismanaged and as a result, natural habitats are destroyed. In tropical areas such as Kahalu'u Bay on the Big Island of Hawaii, the nearly 400,000 visitors and beachgoers per year has resulted in a steady stream of chemical pollutants commonly found in sunscreens and lotions being introduced to local waters.

Dr. Craig Downs, executive director of the non-profit Haereticus Environmental Laboratory in Virginia, which is dedicated to studying and conserving natural habitats, detailed the dangers to the Hawaiian reef. "Kahalu'u -- it's dying," he said.

Downs, in collaboration with scientists at NOAA, studied sunscreen's effect on coral reefs across Hawaii and the U.S. Virgin Islands. Sunscreen pollution near tourist hot spots -- some reefs experiencing up to 6,000 visitors per day -- has proven to be a major factor in the destruction of coral reefs.

"Sunscreen pollution can impact not just coral, but potentially all of the organisms on a coral reef," including fish, seagrass, sea turtles and other marine mammals, he added.

Broad-spectrum sunscreen is recommended by doctors and public health officials alike because it protects people from harmful UVA and UVB rays that are known to cause sunburn, premature skin aging and skin cancer, according to the American Academy of Dermatology.

Consumers can choose between two broad types of sunscreens – a physical, mineral-based sunscreen, which deflects sun rays and contain zinc oxide and/or titanium dioxide, or a chemical sunscreen, which absorbs sun rays and contain one or more of the following: oxybenzone, avobenzone, octisalate, octocrylene, homosalate or octinoxate. Though both types are designed for sun protection, health officials are looking into the latter option for possible impacts on human health, while environmental experts demonstrate an alarming concern for chemical sunscreen’s impact on coral health.

A 2016 study, published in the journal Archives of Environmental Contamination and Toxicology, found that oxybenzone (also known as BP-3) is "highly toxic to juvenile corals and other marine life," according to NOAA. Downs explained persistent oxybenzone concentrations in water can cause permanent DNA damage to coral, preventing its recovery from storms, sedimentation and climate change. "The reef just stays dead until it becomes a ruin," he said.

"Sunscreens that humans use are in the category of 'local stresses of nearly global extent,' so are in a similar category as overfishing and nutrient pollution," said Dr. Pamela Hallock, a professor of Marine Science at the University of South Florida.

NOAA, in an effort to reduce harm to marine life, recommends using mineral-based sunscreens – notably ones made from zinc oxide and titanium dioxide and without nanoparticles –to use Ultraviolet Protection Factor sunwear and seek shade between 10 a.m. and 2 p.m.

"Our environment is suffering because we take advantage of her beauty," she said. "We need to have the tourists understand the importance of place and taking care of it."

Kona, a destination widely unknown prior to the 1950s, is now a popular hub for snorkeling and spotting sea turtles.

KBEC, which distributes pamphlets and runs programs on ocean conservation and coral protection, aims to educate visitors on the importance of preserving the natural splendor of the land and oceans. The organization also offers to swap visitor's chemical-based sunscreens for mineral-based ones, and, Punihaole added, many travelers "are eager to swap because they feel they have done a good deed that makes a positive impact. That feeling of making a difference is so powerful."

While efforts are underway on the local level, states and federal governments are only recently starting to take notice. Hawaii legislators last month introduced a bipartisan bill to ban sunscreens containing ingredients not considered "safe and effective" by the Food and Drug Administration. This legislation, now restricting up to 14 different ingredients, builds upon a 2018 law wherein Hawaii is expected to ban the sale of all sunscreens containing oxybenzone and octinoxate by January 2021. The only two ingredients that are "Generally Recognized as Safe and Effective" by the FDA are the mineral-based ones -- zinc oxide and titanium dioxide. Following a 2019 proposed rule and an inquiry into sunscreen's absorption into the human bloodstream, the FDA is currently gathering data on -- and has yet to determine -- the safety of 12 other active sunscreen ingredients.

Other jurisdictions have followed suit with sunscreen bans, including Aruba, Bonaire, the U.S. Virgin Islands, Marshall Islands, Key West and even a country-wide ban in Palau.

"When Palau passed the Responsible Tourism Education Act, it became the first country in the world to address sunscreen pollution at the national level," said Orion Cruz, legal counsel for the Ministry of Natural Resources, Environment and Tourism. Cruz, who helped draft the 2018 law, noted that the law is one of the strictest of its kind, as it prohibits people from bringing reef-toxic sunscreens into the country.

Despite store-brand labeling, the terms "reef-toxic," "reef-safe" and "reef-friendly" remain largely unregulated today, with no concrete definitions or standards.

"No sunscreen is reef safe. If you have 30 or 3,000 people going into an upland pool or a bay, that sunscreen pollution can have an impact," Downs said. “If a person puts on a long sleeve shirt during the peak UV of the day they don’t need to put on sunscreen on that part of their body. That is more than 50% reduction in sunscreen pollution.”

"We firmly believe that everyone wants to make good choices -- they just might not know how," said Theresa van Greunen, senior director of Aqua-Aston Hospitality in Honolulu, Hawaii. The hotel company, which helped launch World Reef Day in June 2019, introduced an "eco-kit" amenity for guests to help make a sustainable stay easy and includes a mineral-based sunscreen and reusable tote. "By raising awareness we help people know how, and each little choice we influence can lead to big change," she said.