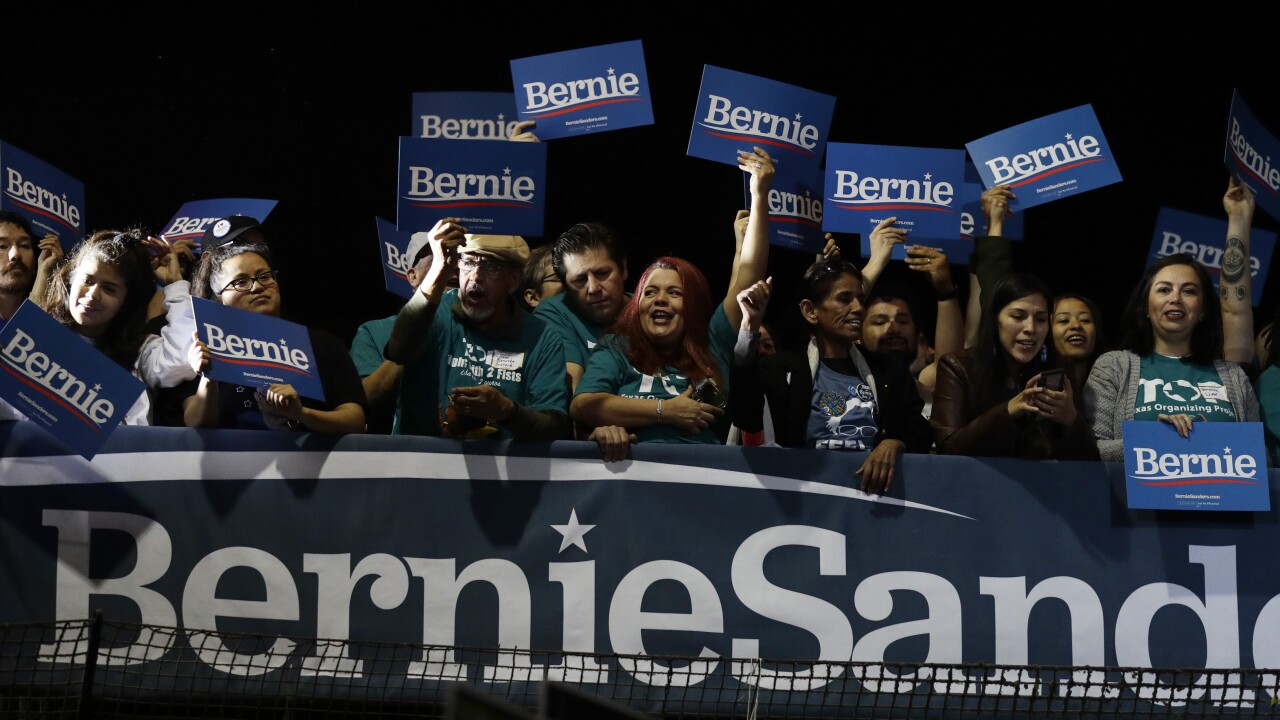 His win on Saturday cements his status as the Democrats' national front-runner, though it's also escalating tensions over whether he’s too liberal to defeat President Donald Trump.

The 78-year-old Vermont senator successfully rallied his loyal base and tapped into support from Nevada’s large Latino community as the Democratic contest moved for the first time into a state with a significant minority population.

Sen. Sanders is celebrating his Nevada caucus victory hundreds of miles away in Texas.

The Vermont senator took the stage before thousands of cheering supporters inside the Cowboys Dance Hall in San Antonio on Saturday night and declared, “We’re going to win this election.” The country’s second largest state votes on “Super Tuesday” on March 3, after next week’s South Carolina primary, but Sanders wasted little time declaring, “We are going to win here in Texas.”

He added: “We are going to win across the country because the American people are sick and tired of a president who lies all of the time.”

Sanders then modified the standard campaign speech he gives multiple times a day to touch more heavily on immigration for an audience about 150 miles from the U.S.-Mexico border. He noted that his father immigrated to the U.S. from Poland "without a nickel in his pocket" and added, "I know something about the immigrant experience. Together we are going to end the demonization” of immigrants.

Amy Klobuchar is telling supporters her presidential campaign has “exceeded expectations” and she plans to carry on, even as she trailed far behind several rivals in Saturday’s Nevada caucuses.

The Minnesota senator returned to her home state Saturday following a morning event in Las Vegas. Speaking to volunteers Klobuchar said that "a lot of people didn’t even think I would still be standing at this point."

Klobuchar finished in fifth place in the kickoff Iowa caucuses before a strong debate performance helped lift her to third place in New Hampshire. She will campaign Sunday in Fargo, North Dakota, before holding events in Arkansas and Oklahoma, both states that will vote in the March 3 “Super Tuesday” contests. On Monday she will be in South Carolina, which holds its primary Saturday and where she will participate in a Tuesday debate.

Meanwhile, Joe Biden is declaring himself back into the race for the presidency after early results in Nevada showed the former vice president in second place. Biden told supporters Saturday that “we're alive and we're coming back and we're gonna win.” Biden thanked unions for their support, citing labor groups that have endorsed him including firefighters, ironworkers and electrical workers.

He took a shot at the race's frontrunner, self-declared democratic socialist Bernie Sanders, and former New York Mayor Mike Bloomberg, who isn't competing in the first four states but has spent hundreds of millions of dollars of his own fortune hoping to pick up delegates starting on Super Tuesday.

Biden said the Russians will continue to support President Donald Trump and Sanders, whose campaign acknowledged Friday that he was briefed last month by U.S. officials about Russian efforts to boost his candidacy.

"Let's give Trump exactly what he doesn’t want," Biden told his supporters. “Let's give him you and Joe Biden as the nominee.”