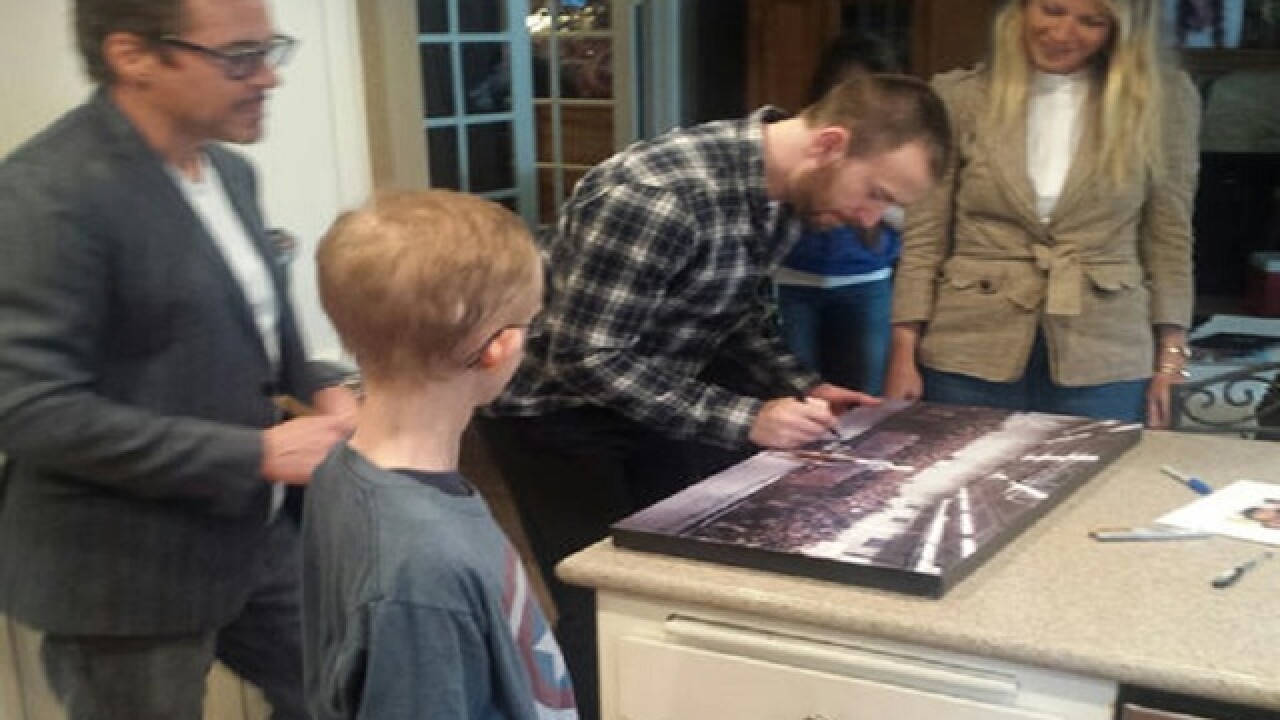 Amy Wilcox
<p>In this Monday, May 23, 2016, photo provided by Amy Wilcox, Captain America Chris Evans, second from right, signs a photo for Ryan Wilcox, second from left, as Iron Man Robert Downey Jr., left, and Gwyneth Paltrow look on during a visit with Wilcox at his home in El Cajon, Calif. The Avengers teamed up to lift the spirits of the teenage fan, Ryan Wilcox, a junior, who has been at home for months battling leukemia. (Amy Wilcox via AP)</p>

EL CAJON, Calif. (AP) — Each night, 18-year-old Ryan Wilcox sleeps under a portrait of himself dressed as Captain America — the pinnacle of human strength and endurance.
The Marvel Comics fan knows a thing or two about those heroic attributes. He is battling cancer for a second time in his life, and so when he recently received some bad news about his prognosis, his schoolmates rallied and called in the Avengers.
On Monday, the 67-pound teen answered his front door and was shocked at what he saw: Iron Man Robert Downey Jr. and Captain America Chris Evans had not only teamed up, they were with "Iron Man" star Gwyneth Paltrow on a mission to lift his spirits.
"Hey what's up buddy?" Evans is heard as Wilcox shakes his head, doing a double take in a video taken by Paltrow. "We were in the neighborhood and thought we'd cruise by."
"Hey guys," says Wilcox, wearing a T-shirt featuring Captain America's shield.
Paltrow, who plays Pepper Potts in the "Iron Man" films, hugged Wilcox's mom, as the other two stars plopped down on the carpeted living room floor. They spent an hour at the home, conversing with the teenager, like they were old friends, his mom, Amy Wilcox, said.
"She told me this is a gift from one mom to another mom," Amy Wilcox said. "She knew how happy it would be for me to see Ryan so happy."
Wearing a blue "Stark" hat with Downey's autograph on the bill, Wilcox was still reveling Tuesday in what he described as the best day of his life.
"It was really cool hanging out with them. That really picked me up," said Wilcox, his voice barely above a whisper. "I'm going to get through this."
Captain America has been a symbol of strength for Ryan Wilcox. The film series has kept him going, keeping him distracted as he has undergone chemotherapy and bone marrow treatments during numerous hospital visits.
Wilcox was diagnosed with a rare blood cancer at the age of 16. His mother said the cancer may be the result of chemotherapy treatments he underwent to fight a brain tumor at the age of three.
He had a bone marrow transplant from his 14-year-old sister in April 2015, but he had a relapse in December of that year. In February, he had to leave school because his immune system was too weak, and last month the family was told the treatments are not working so far and his disease is progressing, his mother said.
Thousands of students at Grossmont High School in the San Diego suburb of El Cajon held a rally two weeks ago, chanting "Ryan Strong." Scores were dressed in red, white and blue in honor of his favorite superhero. Then a group of students made a plea on Facebook for the cast of "Captain America: Civil War" to visit Wilcox.
Evans responded within days of the posting with a video message telling Wilcox to "stay strong."
Evans on Monday signed the shield in the portrait of Wilcox dressed as Captain America above his bed. It reads: "Stay strong Brother!! Chris Evans. CAP."
Associated Press 2016