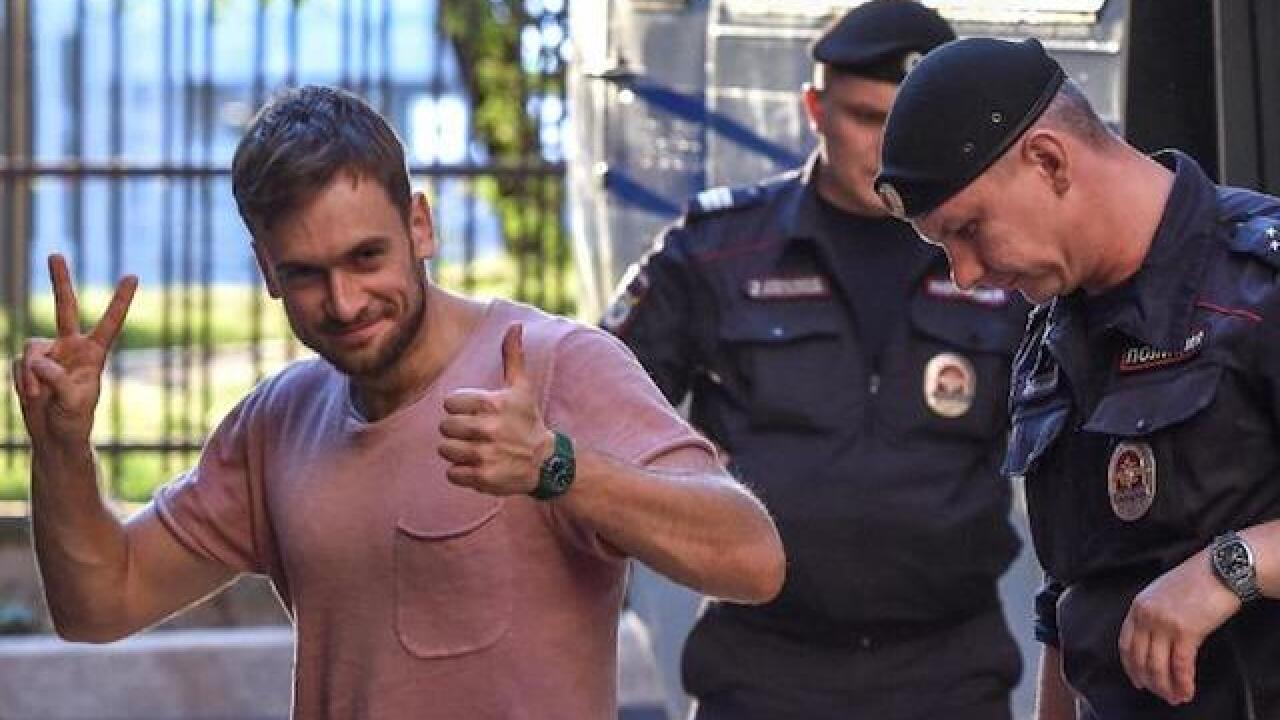 © 2018 Cable News Network, Inc.
Vadily Maximov
<p>Pussy Riot's unofficial spokesman and husband to band member Nadya Tolokonnikova was urgently hospitalized at the toxicology intensive care unit at one of the hospitals in Moscow for suspected poisoning</p>

A member of Russian feminist punk band and activist group Pussy Riot has been hospitalized in Moscow, according to band members, who suspect he has been poisoned.

Pyotr Verzilov is in the intensive care unit at a Moscow hospital, according to tweets from the protest group's verified account, along with state media reporting.

"His life is in danger. We think that he was poisoned," the account tweeted. The band's outspoken members -- known for obscuring their identities with colorful balaclava-style masks -- frequently protest the Putin government.

Russia state news agency Tass quoted Maria Alyokhina, another Pussy Riot member, saying Verzilov was in the toxicology unit and that his relatives had been told they could see him in the morning.

CNN has not independently verified the claims.

Verzilov is married to Nadezhda Tolokonnikova, better known as Nadya, one of the group's most prominent members.

The claim of poisoning comes just days after Russian President Vladimir Putin claimed that two men, accused by the UK of carrying out a poisoning of an ex-Russian spy on British soil, were "civilians" and not agents of the Russian security services.

Former spy Sergei Skripal and his daughter, Yulia, were found slumped on a park bench in the southern English city of Salisbury on March 4. It was later determined that they had been poisoned with a powerful nerve agent called Novichok, which British investigators tied to the Russian government.

The hospitalized Verzilov was one of the protesters who grabbed the world's attention back in July, rushing the field during the 2018 World Cup. The group claimed responsibility for the protest, which took place during the final World Cup match in Moscow.

Minutes into the game's second half, four protesters dressed as police officers ran onto the field at the capital's Luzhniki Stadium, interrupting play.

In a statement posted to Twitter and Facebook, the Russian punk band and activist group called for political prisoners to be freed, for the arrests of opposition protesters to cease, and for the jailing of citizens for their social media activity to end.

Nearly six years ago, three of Pussy Riot's members were charged with hooliganism and sentenced to two years in prison for performing an anti-Putin protest song called "Punk Prayer" at Christ the Savior Cathedral in Moscow.

One of them had her sentence suspended on appeal, but the others served their sentences until being released in December 2013. They have continued to be critical of Putin and his government in the years since -- upon their release, they founded an independent media outlet that advocates for political prisoners, including through "immersive" theater projects.

Tolokonnikova, one of the women imprisoned in 2012, told CNN in 2017 that authoritarianism is spreading like "sexually transmitted diseases," and asserted that "democracy is being eroded" by leaders like US President Donald Trump.

"We've seen the authoritarian tendencies is parading all around the world as sexually transmitted diseases, and we think it's time to make connection," the activist told CNN's #GetPolitical series.

"It's time to create global people's movement if we want to find an alternative to this raid of populism, which we've seen in my own country, Russia and in America too, Donald Trump, and in the UK, which ended up in Brexit."