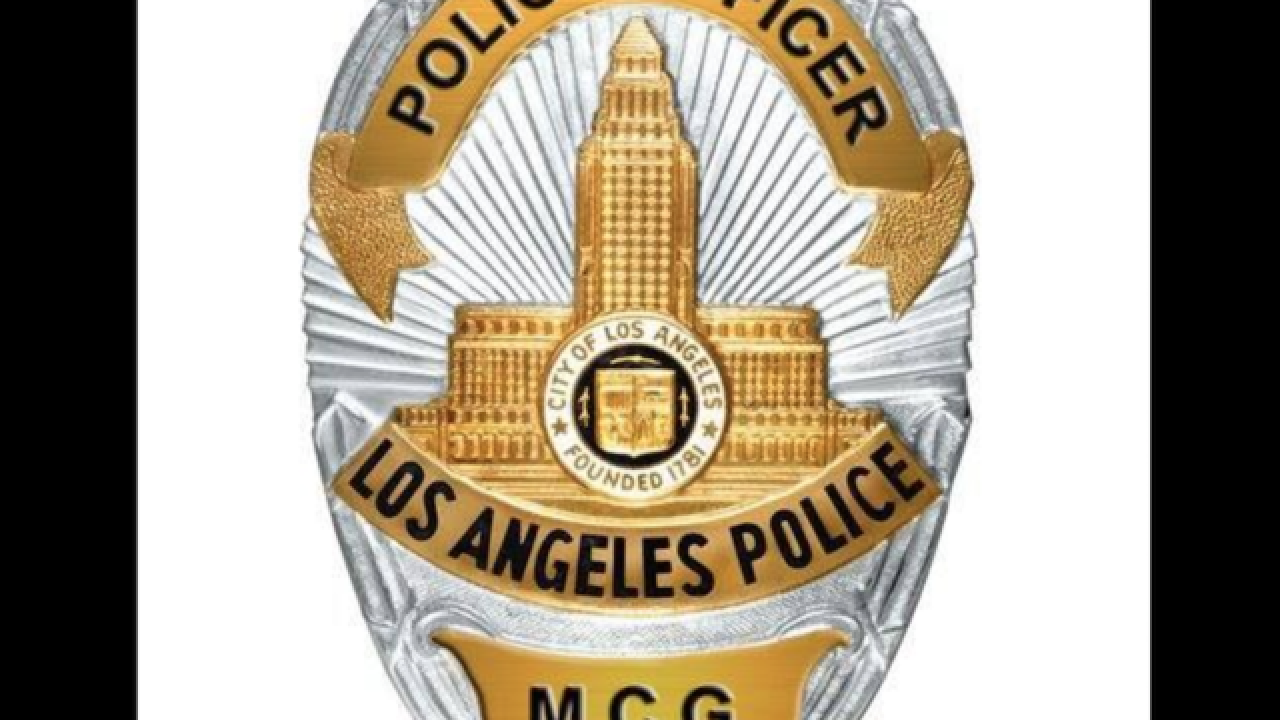 (CNN) -- Protests broke out Wednesday night in Anaheim, California, after an off-duty Los Angeles police officer fired his gun during a confrontation with a teenager.

No one was struck when the officer fired his weapon.

But video of the Tuesday altercation angered protesters who marched in a Southern California neighborhood near Disneyland, demanding that charges be filed against the unidentified officer.

"Don't shoot the kids!" they chanted. "Whose streets? Our streets."

Some participants smashed windows of the officer's house, damaged cars and sprayed graffiti on a neighbor's house, according to CNN affiliate KTLA-TV.

Twenty-four people were arrested on misdemeanor charges as officers ordered protesters to disperse, according to the Anaheim police.

Parts of the encounter were recorded and posted on social media.

In video footage, an adult wearing sunglasses and a teenager shout and scuffle as a crowd of youths gather around to watch.

"Let go of me," the teen yells as the adult holds onto his sweatshirt. "I'm only like freakin' 13!"

In the video, the adult says that the teenager threatened to shoot him, but the youngster denies it, saying the man misheard him when he said he'd "sue him."

Then a young bystander intervenes, charging at the adult and knocking him over a row of bushes. Another teen races in and tries to punch the adult. As more teenagers gather around, the adult pulls out a gun and fires a shot.

Anaheim police arrested two of the teenagers, one for making criminal threats and battery, and the other for assault and battery. The department said it was not arresting the off-duty officer but that a complete investigation would be forwarded to the Orange County district attorney's office for review.

The Los Angeles Police Department said the unidentified officer has been placed on administrative leave. Its detectives from the Force Investigation Division will conduct an investigation to "determine whether the use of deadly force complied with LAPD's policies and procedures," the department said in a statement.

'There is no justification for him to pull a gun out'

The decision not to arrest the officer led to an outcry, with protesters questioning why the officer didn't try to de-escalate the situation.

"At the end of the day there is no justification for him to pull a gun out, and he pulled it out around a crowd of children," one female protester told KTLA. "If he is a police officer, he should know better."

The American Civil Liberties Union of Southern California called on the Anaheim police to explain why the teenagers were arrested, while the officer was not.

"The LAPD officer's actions on the video are grossly irresponsible," the ACLU said in a statement.

Anaheim police responded to the criticism in a statement Wednesday: "Calling and sending emails to APD voicing your displeasure will NOT impact the outcome. A decision whether or not to file charges rests with the District Attorney's office and is based on facts and evidence."

KTLA spoke with the 13-year-old teenager involved in the altercation and his mother, not identifying them by name.

The eight-grader said the conflict started when the students were walking home from school and a female student stepped on the officer's lawn. The officer cursed at the girl, and that's when he spoke up. The teenager said the officer then "came at me" and then "shot the gun near me."