Lawyer for Scott family: Can't tell if victim had a gun 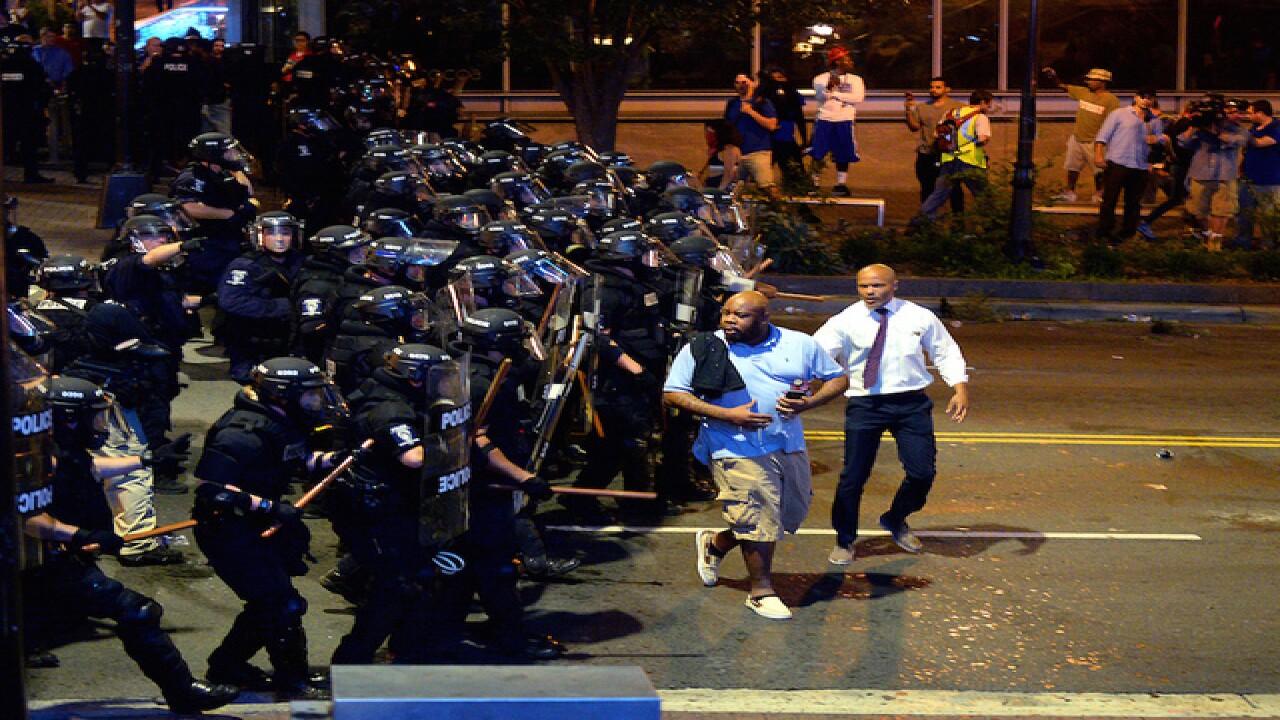 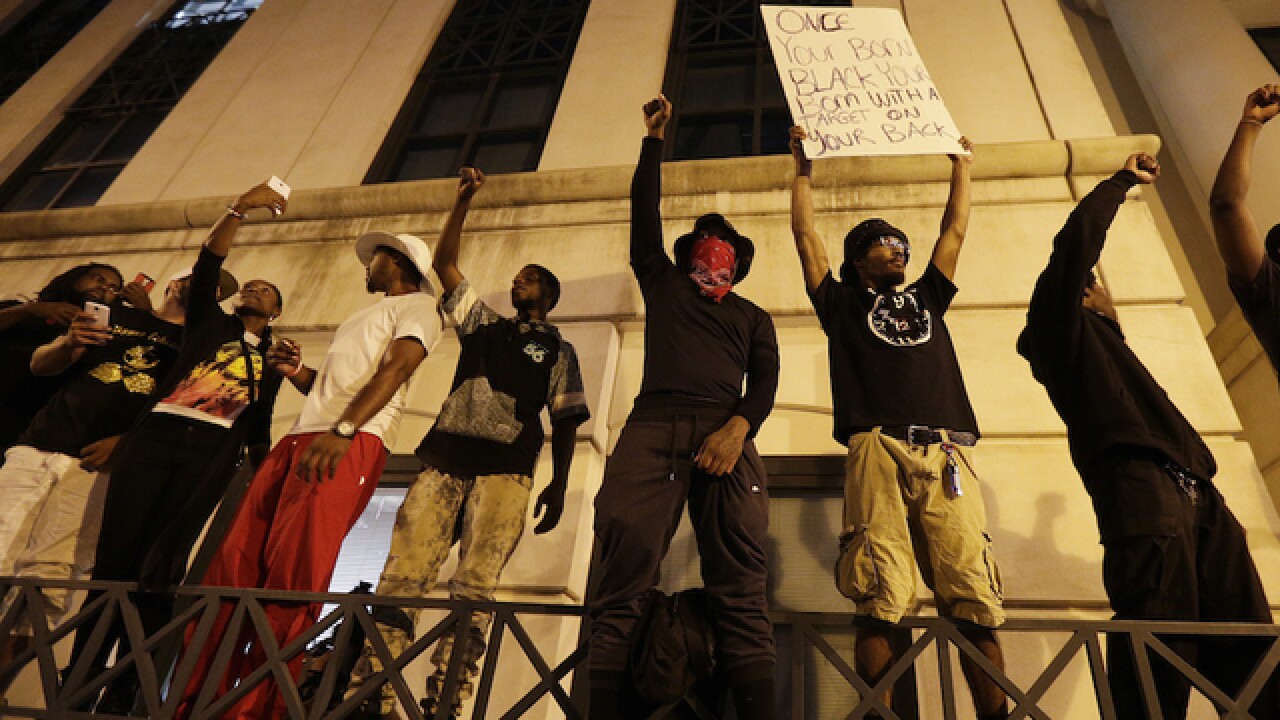 CHARLOTTE, N.C. (AP) — Charlotte police refused under mounting pressure Thursday to release video that could resolve wildly different accounts of the shooting of a black man, as the National Guard arrived to try to head off a third night of violence in this city on edge.

The family of 43-year Keith Lamont Scott demanded police release the video after showing them the footage at their request. The family's lawyer said he couldn't tell whether Scott was holding a gun.

Charlotte-Mecklenburg Police Chief Kerr Putney said that releasing police dashcam and body camera footage of Scott's killing could undermine the investigation. He told reporters the video will be made public when he believes there is a "compelling reason" to do so.

"You shouldn't expect it to be released," Putney said. "I'm not going to jeopardize the investigation."

Meanwhile, an undisclosed number of National Guardsmen assembled in Charlotte, sent in by Gov. Pat McCrory after a second straight night of racial unrest that seemed at odds with Charlotte's image as a diverse, forward-looking banking capital of the New South.

Charlotte is just the latest U.S. city to be shaken by protests and recriminations over the death of a black man at the hands of police, a list that includes Baltimore, Milwaukee, Chicago, New York, and Ferguson, Missouri. In Tulsa, Oklahoma, on Thursday, prosecutors charged a white officer with manslaughter for killing an unarmed black man on a city street last week.

In Charlotte, scores of rioters Wednesday night attacked reporters and others, set fires and smashed windows of hotels, office buildings and restaurants in the city's bustling downtown section. The NASCAR Hall of Fame was among the places damaged.

Forty-four people were arrested, and one protester who was shot died at the hospital Thursday; city officials said police did not shoot the man and no arrests have been made in 26-year-old Justin Carr's death.

On Thursday, in a measure of how tense things had become, three of Charlotte's major employers — Bank of America, Wells Fargo and Duke Energy — told thousands of employees not to venture into the city.

Hours before nightfall Thursday, the police chief said he saw no need for a curfew. In addition to the National Guardsmen, North Carolina state troopers and U.S. Justice Department conflict-resolution experts were sent to keep the peace.

Demonstrators have been demanding answers in Scott's killing, with some carrying signs that read "Release the tapes."

Police have said that Scott was shot to death Tuesday by a black officer after he disregarded loud, repeated warnings to drop his gun. Neighbors, though, have said he was holding only a book. The police chief said a gun was found next to the dead man, and there was no book.

Putney said that he has seen the video and it does not contain "absolute, definitive evidence that would confirm that a person was pointing a gun." But he added: "When taken in the totality of all the other evidence, it supports what we said."

Justin Bamberg, an attorney for Scott's family, watched the video with the slain man's relatives. He said Scott gets out of his vehicle calmly.

"While police did give him several commands, he did not aggressively approach them or raise his hands at members of law enforcement at any time. It is impossible to discern from the videos what, if anything, Mr. Scott is holding in his hands," Bamberg said in a statement.

Scott was shot as he walked slowly backward with his hands by his side, Bamberg said.

The lawyer said at a news conference earlier in the day that Scott's wife saw him get shot, "and that's something she will never, ever forget." That is the first time anyone connected with the case has said the wife witnessed the shooting. Bamberg gave no details on what the wife saw.

Experts who track shootings by police noted that the release of videos can often quell protest violence, and that the footage sometimes shows that events unfolded differently than the official account.

"What we've seen in too many situations now is that the videos tell the truth and the police who were involved in the shooting tell lies," said Randolph McLaughlin, a professor at Pace University School of Law. He said it is "irresponsible" of police not to release the video immediately.

Other cities have released footage of police shootings. Just this week, Tulsa police let the public see video of the disputed Sept. 16 shooting, though the footage left important questions unanswered.

Last year, a Chicago police officer was charged with murder the same day the city released dashcam video that showed him shooting black teenager Laquan McDonald 16 times, footage that contradicted the accounts of officers who said the teen swung a knife at them.

"We all stand together declaring there must be transparency and the videos must be released," the Rev. William Barber, president of the North Carolina NAACP, said at a news conference. "At this point, there is speculation because the videos have not been released. Be clear: There is unrest in Charlotte and across America because of what we do know."

The police chief acknowledged that he has promised transparency in the investigation, but said, "I'm telling you right now, if you think I say we should display a victim's worst day for consumption, that is not the transparency I'm speaking of."

Keith Scott's family released the following statement after viewing the video of the shooting.

After watching the videos, the family again has more questions than answers.

When told by police to exit his vehicle, Mr. Scott did so in a very calm, non-aggressive manner.

While police did give him several commands, he did not aggressively approach them or raise his hands at members of law enforcement at any time.

It is impossible to discern from the videos what, if anything, Mr. Scott is holding in his hands.

When he was shot and killed, Mr. Scott's hands were by his side and he was slowly walking backwards.

It was incredibly difficult for members of the Scott family to view these videos, but as a matter of the greater good and transparency, the Scott family asks that the Charlotte-Mecklenburg Police Department publicly immediately release both of the videos they watched today.

We will continue our own investigation into Mr. Scott's death.  For those who wish to protest, we urge you to do so peacefully."