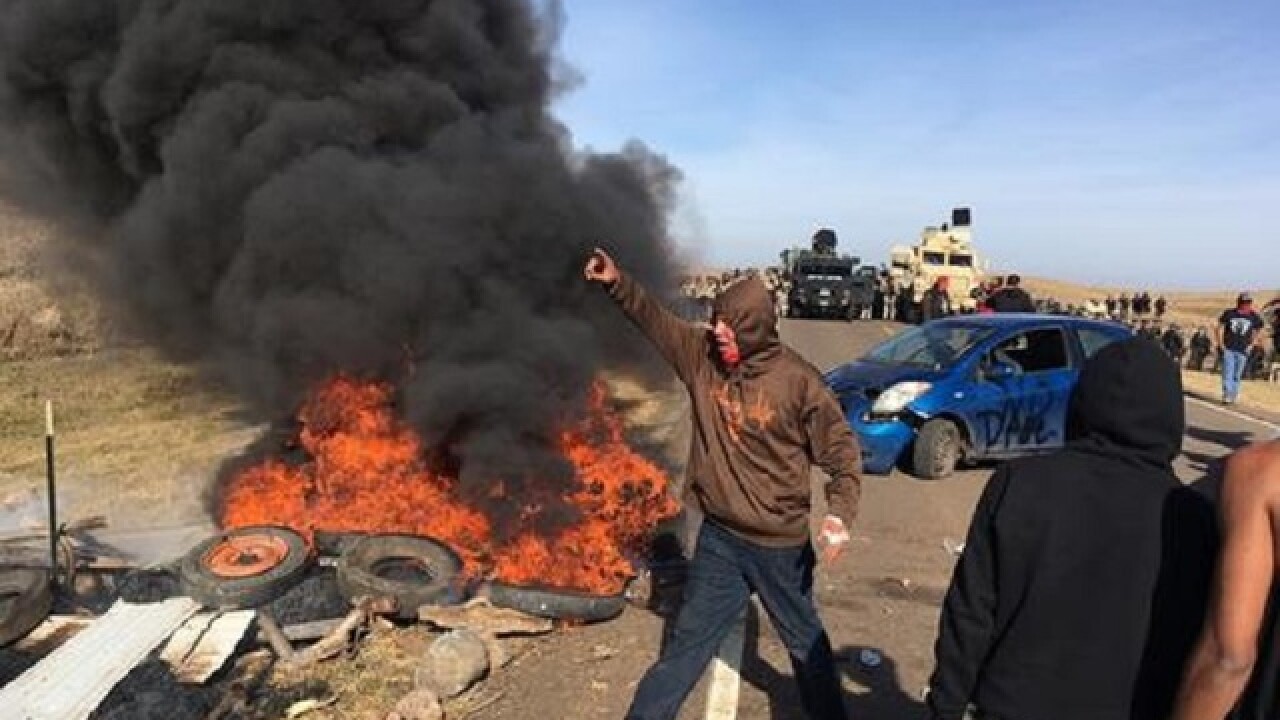 Mike McCleary
<p>Demonstrators stand next to burning tires as armed soldiers and law enforcement officers assemble on Thursday, Oct. 27, 2016, to force Dakota Access pipeline protesters off private land where they had camped to block construction. The pipeline is to carry oil from western North Dakota through South Dakota and Iowa to an existing pipeline in Patoka, Ill. (Mike McCleary/The Bismarck Tribune via AP)</p>

CANNON BALL, N.D. (AP) — A months-long protest over the Dakota Access oil pipeline reached its most chaotic pitch yet when hundreds of law enforcement officers moved in to force activists off private property.
Thursday's nearly six-hour operation dramatically escalated the dispute over Native American rights and the project's environmental impact, with officers in riot gear firing bean bags and pepper spray.
At least 117 people were arrested. No serious injuries were reported, though one man was hurt in the leg and received treatment from a medic.
Among those arrested was a woman who pulled out a .38-caliber pistol and fired three times at officers, narrowly missing a sheriff's deputy, according to State Emergency Services spokeswoman Cecily Fong. Officers did not return fire, she said.
Morton County Sheriff Kyle Kirchmeier said that the camp had been cleared by nightfall. Though officials earlier said they planned to turn the site over to private security, Kirchmeier said police would stay.
"We're not leaving the area," he said. "We are just going to make sure that we maintain a presence in the area so the roadway stays open, and to keep individuals from camping on private land."
Texas-based Energy Transfer Partners is working to complete the 1,200-mile pipeline to carry oil from western North Dakota to Illinois. But the route skirts near reservation land of the Standing Rock Sioux, who say it could endanger water supplies and disturb cultural sites, though state officials say no sensitive sites have been found on the route.
The tribe has gone to court to challenge the U.S. Army Corps of Engineers' decision granting permits. A federal judge in September denied its request to block construction, but three federal agencies stepped in to order construction to halt on Corps-owned land around Lake Oahe, a wide spot of the Missouri River, while the Corps reviewed its decision-making.
Meanwhile, construction has been allowed to continue on private land owned by the developer, with a goal of completion by the end of the year.
The opposition ratcheted up over the weekend when protesters set up camp on private land owned by Energy Transfer Partners — putting themselves for the first time directly in the project's path.
The operation to push out the protesters began a day after they had refused to leave voluntarily. Law enforcement repeatedly asked protesters to retreat, at one point using a high-pitched whistle they said was intended to "control and disperse" protesters.
The camp cleared on Thursday is located just to the north of a more permanent and larger encampment on federally owned land which has been the main staging area for hundreds of protesters, including Native Americans from across North America, environmentalists and some celebrities.
Many protesters openly defied the officers, while others took part in prayer circles and burned sage.
Cody Hall, a spokesman for the protesters, vowed a new camp would be built elsewhere in the pipeline's path, but on federal land.
"It's going to take a lot to move them (protesters) from there," he said.
Authorities said protesters set fire to four large pieces of construction equipment. At least two cars were also burned.
Aaron Johnson, 50, a member of the Cheyenne River Sioux in South Dakota, said he and other protesters weren't happy with the day's outcome. "I came here for peace and prayer," he said. "When somebody sets something on fire, that's not peace and prayer."
Copyright 2016 The Associated Press. All rights reserved. This material may not be published, broadcast, rewritten or redistributed.