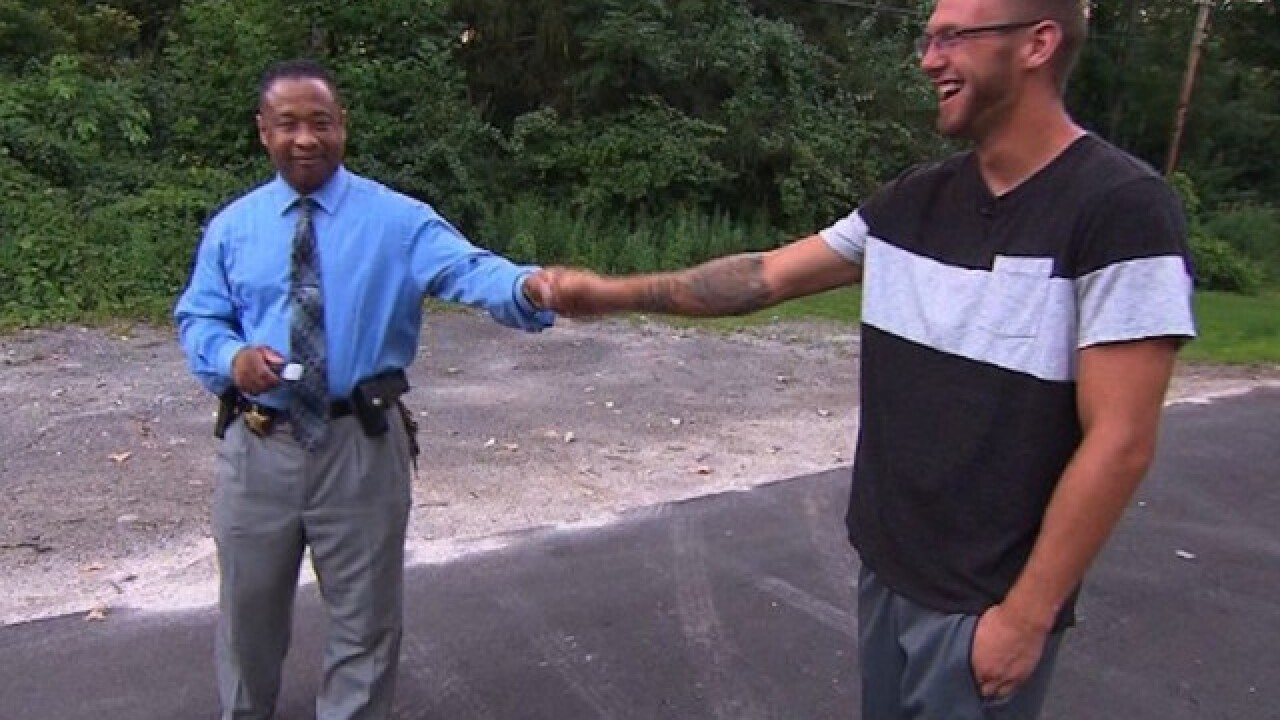 For 22 years, Deputy Charles Johnson has started his workday by putting on his police uniform.

But he won't be wearing that uniform today, tomorrow or anytime soon.

Johnson is part of an experiment to help curb the opioid epidemic in Ohio, where on average, eight people die every day from unintentional drug overdoses.

Instead of arresting people who use heroin, Johnson tries to help them. He drives them to their detox appointments. He visits them at home and meets their families. He helps them find work. He takes their phone calls in the middle of the night when they have the urge to shoot up.

That's why Johnson wears a coat and tie instead of a police uniform and why he drives a regular car instead of a sheriff's cruiser. He wants his clients, as he calls them, to feel like he's more of a counselor and less of a cop.

His message to his clients is simple and clear: "I let them know there's a chance," he said. "You have hope."

Johnson works for the Drug Abuse Response Team, or DART, a part of the Lucas County Sheriff's Office. Over the past three years, he and seven other officers have responded to more than 2,400 overdose victims. This year, they've seen an average of 18 a week -- and that's just in Lucas County.

The program has worked so well that the Ohio attorney general recently gave $3 million to dozens of other law enforcement agencies in the state to replicate it.

The deputy and the waitress

Johnson was at home one August morning this year when he got the call to come to Sylvania Medical Center in Toledo. Someone had overdosed: a waitress at a local restaurant.

"She's waited on me and my wife there. I know her personally," he said.

"She's very upset," he said after walking out of her hospital room. "I spoke with her a little bit, tried to calm her down. I told her 'It's going to be OK. You made a mistake. We all make mistakes. We're going to try to go forward here, and I'm here to help you.' "

"Once you lose that trust in anybody, addicts especially, they're gone, and you can't get that back," he said. "Our success comes from the relationships we build."

'We don't lock people up for having cancer'

Whenever there's an opioid overdose in Lucas County, hospital staff and other law enforcement officers call a member of the DART program, the brainchild of Sheriff John Tharp. About three years ago, Sharp started to notice that the people filling his jail didn't look much like the bad guys he'd met during his four-plus decades in law enforcement.

"I saw clean-cut-looking young people writhing on the floor, screaming and vomiting and urinating on themselves," he said. "It could have been any of our relatives or children."

"I realized we weren't going to arrest our way out of this epidemic," he said.

Tharp, 69, spent 14 years on the Toledo vice and narcotic squad. He began to rethink the traditional law enforcement approach to drugs.

"In my view, addiction is not so much a crime as a disease," he added. "None of these people would ever say 'I want to be a heroin addict. I love being a heroin addict.' They would say, 'I'm sick. I'm ill.' I don't have any reservations helping sick people at all. We don't lock people up for having cancer. We help them."

Tharp floated the idea for DART by some of his colleagues in law enforcement. They didn't like it.

"A lot of my peers said, 'John, you didn't stick that needle in their arm. Why should you pull it out?' " he remembered. "But then some of those same people started changing their minds because they had a family member die. It took about a year or so, but they came around."

Tharp says that over the past three years, his unit has had an 81% success rate at getting people who've overdosed to go into a detoxification program.

"That's a very high number. That's a very successful program," said Dr. Kathryn Hawk, an assistant professor of emergency medicine at the Yale School of Medicine who does research on overdose prevention and treatment.

Researchers at the University of Toledo are studying whether DART helps people achieve sobriety long-term, Tharp said. He hopes so -- for the sake of those suffering from addiction and for everyone around them.

"The more people you help and get off drugs, the more crime you've reduced," he said. "They're not stealing their grandparents' painkillers or breaking into cars and ransacking consoles for a few bucks to buy heroin."

Codey Morris' friends stole painkillers from their parents and grandparents, and that's how he started using opioids. Later, he stole money from his own family to buy heroin.

"Every time I got out of jail, I went back to the same thing. Every single time," he said.

It wasn't that his family didn't care. They helped Morris go to rehab about 20 times, sometimes paying for him to go to expensive programs out of state.

In July 2015, Morris suffered an overdose, at least his sixth by his count. He woke up in Toledo Hospital with Johnson, the Lucas County sheriff's deputy, standing over him.

"He wasn't demanding or intimidating me at all. He was caring," Morris remembers. "I let him in, and I'm glad I did."

Morris said that what set Johnson apart was his relentlessness. His attention didn't end at 30 days or 90 days, like rehab. Day in and day out, during his treatment and after, Johnson called to check in on him. He asked whether he'd been to work that day. He drove Morris to treatment appointments if he didn't have a way of getting there himself.

More than two years later, Morris, 25, is sober and has a full-time job.

Not all clients do so well. A few days after Johnson helped the waitress in early August, he paid her a visit, and she wanted nothing to do with him. Now, he can't find her. She's somewhere on the streets of Toledo.

It's not easy for him to keep up with everyone, since he has an active caseload of nearly 60 clients.

But he tries his best and keeps in touch with Morris to make sure he's still doing OK.

"You showed up and gave me an opportunity, man," Morris told Johnson when they met recently. "If it wasn't for you, I definitely wouldn't be where I'm at."