Obama slams Republicans and says Trump is 'capitalizing on resentment' 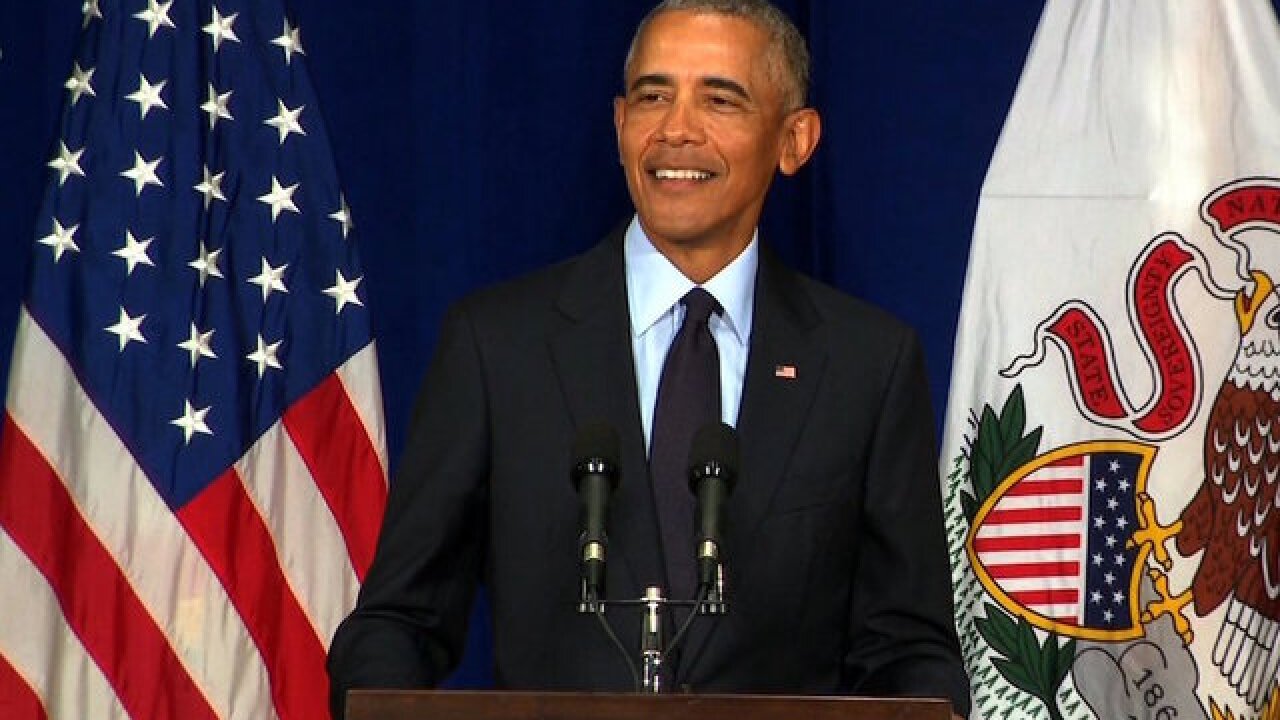 © 2018 Cable News Network, Inc.
POOL
<p>Obama stepped back into the political fray Friday, delivering a speech at the University of Illinois at Urbana-Champaign, where he opened his remarks by vigorously describing to his audience how important he sees the midterm elections.</p>

Former President Barack Obama said President Donald Trump is "capitalizing on resentment that politicians have been fanning for years" and questioned "What happened to the Republican Party?" a preview of Obama's message for the fall's midterms and his most pointed rebuke to date of his successor in the White House.

Obama stepped back into the political fray Friday, delivering a speech at the University of Illinois at Urbana-Champaign. One theme of Obama's speech is how the history of the United States has always been progress and "backlash to progress," and the former President argued the country is currently in one of those backlash moments.

"You happen to be coming of age during one of those moments," Obama said. "It did not start with Donald Trump, he is a symptom, not the cause. He is just capitalizing on resentment that politicians have fanning for years. A fear, an anger that is rooted in our past but is also borne in our enormous upheavals that have taken place in your brief lifetimes."

Obama also said standing up to discrimination should be a bipartisan effort, adding "How hard can that be, saying that Nazis are bad?"

"It shouldn't be Democratic or Republican to say that we don't target groups of people because of what they look like or how they pray," Obama said. "We are supposed to stand up to discrimination and we are sure as heck to stand up clearly and unequivocally to Nazi sympathizers."

In his remarks, Obama highlighted the anonymous op-ed in The New York Times this week, published by a Senior Administration Official.

"And by the way the idea that everything will turn out OK because there are people inside the White House who secretly aren't following the President's orders," he said. "That is not a check. I am being serious here. That is not how our democracy is supposed to work."

Obama also spent a sizable portion of his remarks criticizing Republicans in Congress, saying "the politics of resentment and paranoia has unfortunately found a home in the Republican party" over the last few decades and argued that the policies GOP leaders are pursuing aren't conservative.

He acknowledged that politicians -- including himself -- had said similar messages about the importance of upcoming elections, but he added, "just a glance at recent headlines should tell you that this moment really is different, the stakes really are higher, the consequences of any of us sitting on the sidelines are more dire."

Obama and Trump have not talked since the inauguration, a source tells CNN.

Obama was editing his first public speech of the 2018 midterms on the plane, an aide to the former president tells CNN, scribbling notes and crossing out lines on a printed copy.

The auditorium in Illinois was filled Friday with a mix of students and Illinois political figures, including Senate Minority Whip Dick Durbin and Illinois Democratic gubernatorial nominee JB Pritzker.

The speech comes ahead  of Obama's first campaign events of the midterms : a rally for a handful of Democratic congressional candidates in California on Saturday and an event for Richard Cordray, the Democratic gubernatorial candidate in Ohio, next Thursday.

Obama's office announced his first round of endorsements earlier this year and the official said his second round will be released in coming weeks.

While Obama is back in the state he once represented in the Senate to accept the Paul H. Douglas Award for Ethics in Government from the university, a top Obama adviser tells CNN the former president has long been eyeing the forum as the best place to deliver his opening salvo in the midterms.

"We thought it was important to find a setting where he can find a cogent, rational argument outside of the more chaotic campaign appearances that come this fall," the adviser said. "The speech will lay down a frame and his message for fall. He will lay out his views about where we are and where we go from here."

Obama's speech in the university's 1,300-person auditorium has seen sizable interest from the school's student body, according to university spokesman Jon Davis, who said they had received around 22,000 requests for tickets.

Obama out of the spotlight until now

Obama has spent much of 2018 away from the political fray, focusing on writing his book and raising money for his post-presidency foundation. The distance has annoyed some Democrats, who believe their most potent weapon is sitting out the midterms in an effort to maintain decorum that has long since left politics.

Obama has made some appearances since Trump took office -- including headlining a fundraiser for the Democratic National Committee earlier this year -- but the Trump era has complicated Obama's post-presidency. A series of former presidents have avoided critiquing their successors, and Obama has attempted to keep that tradition since he left office in January 2017.

Trump has not honored that tradition and has shown little to no regard for his predecessors, regularly bashing them on Twitter, to the media and at rallies. Obama's latest foray into politics is likely to ignite Republicans, including Trump.

And Republicans welcomed Obama's return to the campaign trail on Friday, arguing he is the best weapon they have to motivate their base.

"For three cycles (2010, 2012, 2014) President Obama fired up Republicans like nobody," Rep. Steve Stivers, the head of the National Republican Congressional Committee, told reporters on Friday. "And I'm happy he wants to do it again."

Obama never said Trump's name during his fundraising speech for the DNC and instead urged Democrats to stop "moping" and get to work for candidates.

"If what you are doing requires no sacrifice at all, then you can do more," Obama told the crowd at a sweeping multi-million-dollar Beverly Hills home. "If you are one of these folks who is watching cable news at your cocktail parties with your friends and you are saying 'civilization is collapsing' and you are nervous and worried, but that is not where you are putting all your time, energy and money, then either you don't actually think civilization is collapsing ... or you are not pushing yourself hard enough, and I would push harder."

An Obama office official said before the speech that they could not say whether the former president would mention Trump directly in Illinois but added that "regardless of whether he mentions him by name, it will be very clear who he is talking about."