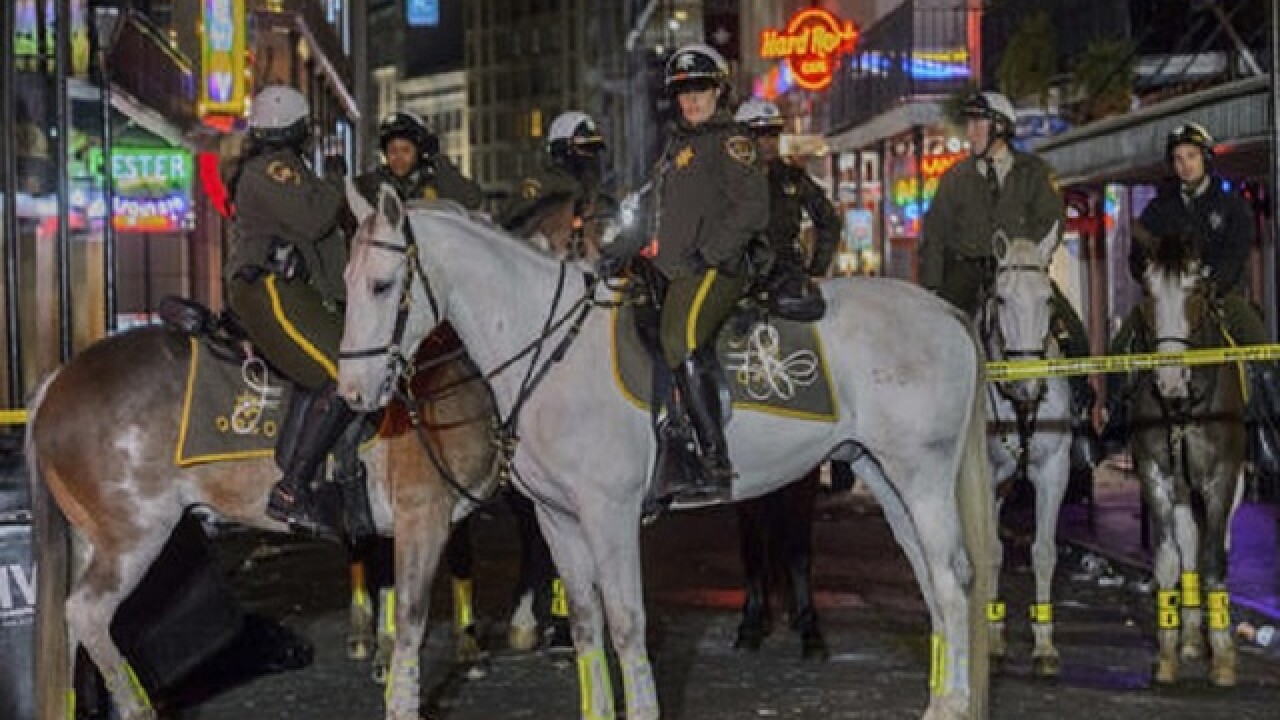 NEW ORLEANS (AP) — Police had already increased patrols in New Orleans' bustling French Quarter before gunfire erupted early Sunday, leaving one man dead and nine other people wounded in a tourist district famed for its bars, bright lights and live music.
Extra uniformed and plainclothes officers were on duty and ambulance crews were on standby for what Mayor Mitch Landrieu said was supposed to be a festive time with college and pro football games in the city and people vacationing over the long Thanksgiving weekend.
Police Superintendent Michael Harrison said officers responded about 1:30 a.m. Sunday to the shooting at the intersection of Iberville and Bourbon streets.
Harrison said none of the victims was an intended target when two other men began arguing and shooting. Investigators continued searching Sunday night for the suspects, who fled on foot. Landrieu said authorities believe the suspects are from out of town.
"We will find them. And we will go to the ends of the earth to make sure that we bring them to justice," Landrieu said.
The shooting victims were two women and eight men, ranging in age from 20 to 37, Harrison said. One of the men — 25-year-old Demontris Toliver — died at a hospital.
Five of the victims were released from a hospital by Sunday night, and four remained hospitalized with injuries that were not considered life-threatening, the police superintendent said.
Twelve people, including one of those shot, were arrested in the French Quarter on Saturday and Sunday and charged with illegal possession of a firearm, police said. However, none of them was considered a suspect in the mass shooting.
Harrison said the violence happened despite an increased police presence for the Bayou Classic football game Saturday night between Southern and Grambling universities. The New Orleans Saints played Sunday at the Superdome. He said officers were nearby, heard the shots and ran toward them.
Glean Williams, who was selling hats and other items at a table a block away from the shooting, told NOLA.com/The Times-Picayune (http://bit.ly/2foeQRu ) that people ran into doorways and hotels, or hid behind palm trees decorated with Christmas lights along nearby Canal Street.
"It was panic," said Williams, 24. "Everybody started running. People getting run over, stepped on, knocked over."
Harrison asked that anyone witnessing the shooting to call police so "we can hold those accountable who committed this heinous crime and prosecute them to the fullest extent of the law."
Copyright 2016 The Associated Press. All rights reserved. This material may not be published, broadcast, rewritten or redistributed.