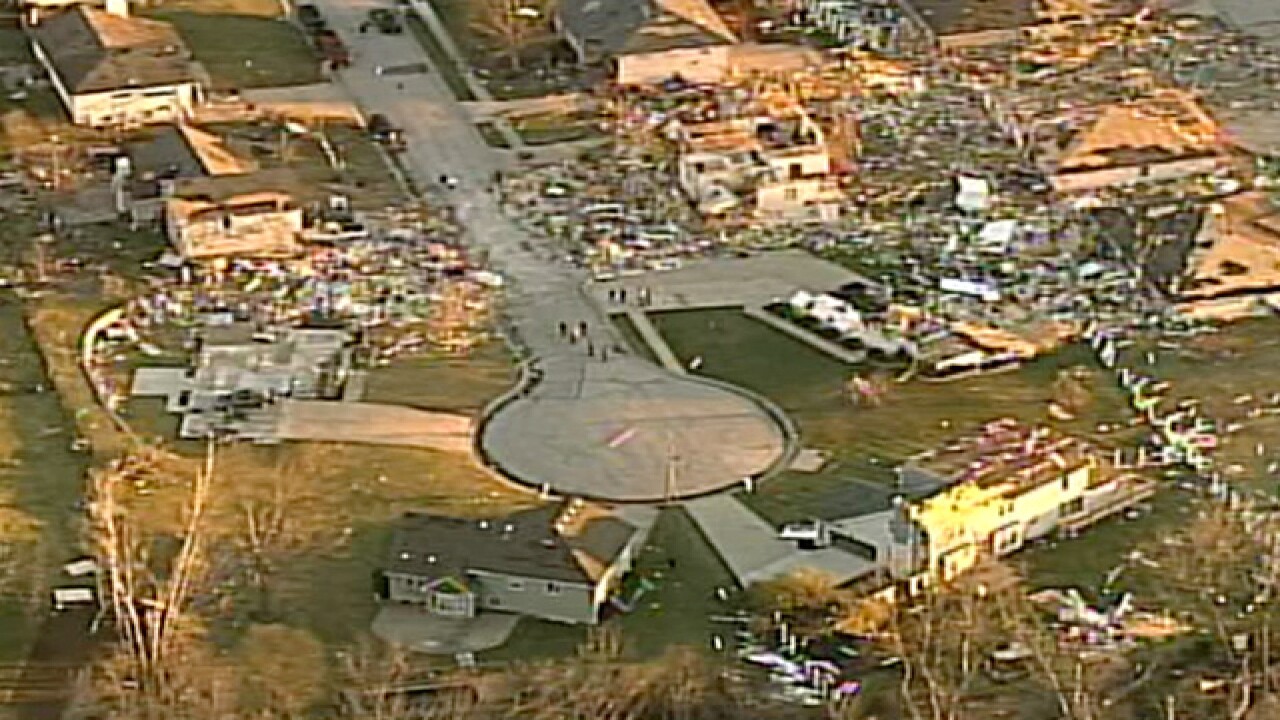 The National Weather Service says at least two tornadoes touched down in Missouri Monday evening as a line of severe storms with heavy rain and large hail moved across the state, damaging homes in communities north and east of the Kansas City metro area.

In Oak Grove, Missouri, 483 homes sustained some type of damage, along with 10 to 12 commercial buildings, said Sni Valley Fire Protection District Chief Carl Scarborough. Twelve people were treated for injuries by emergency responders on Monday, and three were taken to hospitals with injuries that weren't life-threatening, he said.

"It played out as we expected - several tornadoes and a lot of wind damage," Hawblitzel said. "It's certainly sad to see and hear about the homes destroyed."

Oak Grove Mayor Jeremy Martin praised the work of emergency crews and said it was remarkable there were no deaths.

"It looks like the injuries are minimal so, based on some of the damage I've seen, it's rather amazing," Martin said in a Tuesday morning press conference.

Dan Hawblitzel, a National Weather Service meteorologist based in Pleasant Hill, Missouri, said there were corridors of significant damage in Oak Grove, Smithville north of Kansas City and the Kansas suburbs of Leawood and Olathe. Hawblitzel said there were no immediate reports of fatalities from the storms.

"It played out as we expected - several tornadoes and a lot of wind damage," Hawblitzel said. "It's certainly sad to see and hear about the homes destroyed."

The late-winter storms spawned warnings from the Southern Plains to the Upper Midwest. Baseball-sized hail was reported in parts of Missouri, while hurricane-force winds were reported in parts of Iowa. The storm system was weakening as it moved to the east but the Storm Prediction Center said parts of Louisiana, Mississippi and Alabama could see severe thunderstorms Tuesday.

Jewell said radar indications showed the twister continued northeast into Clinton County, toward the town of Lathrop, before it began to dissipate.

A short time later, another tornado touched down east of Kansas City in Jackson County, just south of Interstate 70. Jewell said the twister hit near Grain Valley and moved east toward Oak Grove.