Veteran Ryan Lochte will join him 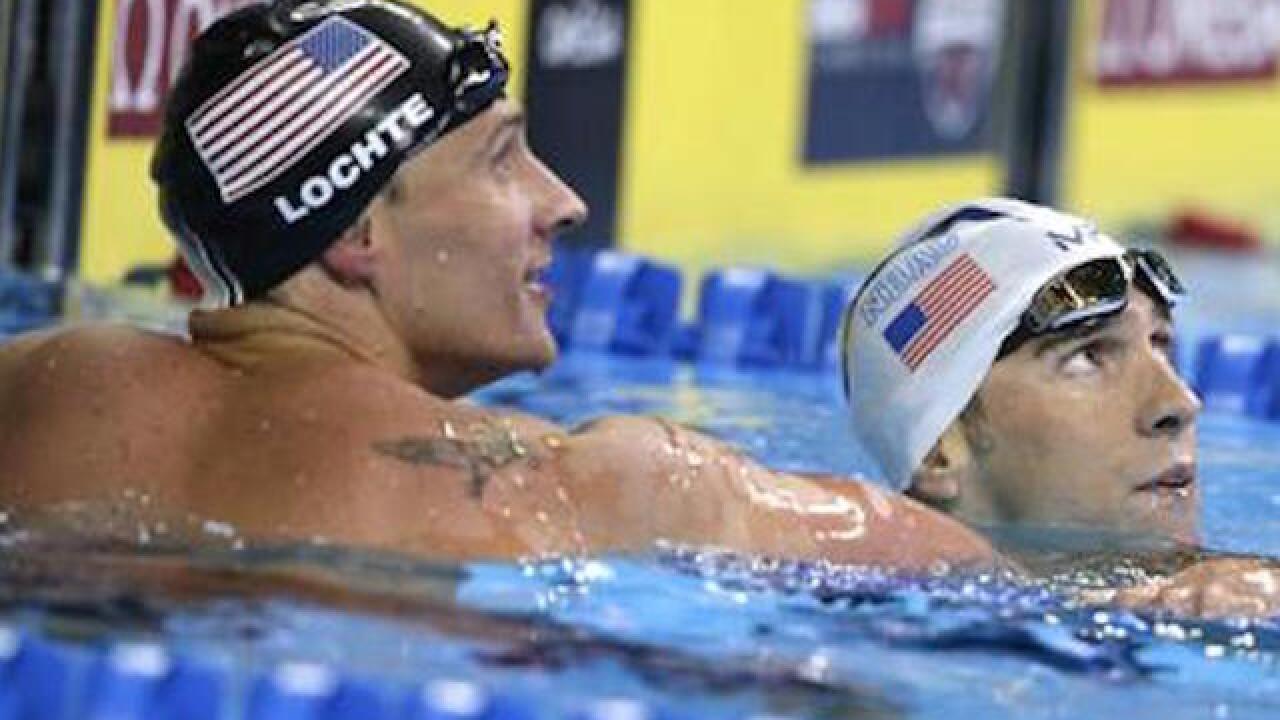 OMAHA, Neb. (AP) — Matching each other stroke for stroke, Michael Phelps and Ryan Lochte surged to the wall in almost perfect sync.

Phelps got there first, just ahead of the guy who's pushed him hard for more than a decade.

It was like so many races they've had before.

There's one more to go in Rio.

In the latest epic of their longtime rivalry — and billed as the last showdown in their home country — Phelps edged Lochte in the 200-meter individual medley at the U.S. Olympic swimming trials Friday night.

"Ryan and I always have a great race with one another," said Phelps, who plans to retire again after his fifth Olympics. "When we race each other, we bring each other to a different level."

Phelps led from start to finish, but Lochte was right with him all the way. In fact, he seemed to pull even midway through the final lap, but the most decorated athlete in Olympic history managed to get to the wall in 1 minute, 55.91 seconds.

Lochte was next at 1:56.22 and had no complaints about the consolation prize: his only individual race at the Olympics.

"I knew going into this race it was definitely going to be a dogfight to the end," Lochte said. "It's been a long journey, but the journey's not over. We still have another month to get ready and show the world that the U.S. is number one."

Lochte, an 11-time medalist, injured his groin on the very first day of the meet, struggled in his next few races and was down to his final chance to get a swim of his own at the Summer Games.

Now, that's out of the way, which means Phelps and Lochte will get another crack at each other in South America.

As a three-time defending gold medalist in the 200 IM, Phelps will be the favorite.

But he knows Lochte won't be far behind, especially with a month to get over the groin issue.

"I don't know of another person in this world who brings out the best in me like he does," said Phelps, who has 18 golds and 22 medals overall. "Neither one of us likes to lose."

Phelps and Lochte actually had their first encounter on the way to the deck. Lochte, walking out right behind Phelps, stepped on the back of his sneaker.

All was forgiven when it was over, Phelps and Lochte holding up their arms together on the deck while the sellout crowd roared.

It was the end for another defending Olympic champion.

Tyler Clary finished third in the 200 backstroke and called it a career, having missed out on a chance to defend the gold he won in London. He finished behind California Aquatics teammates Ryan Murphy and Jacob Pebley, who earned the two spots for Rio.

Murphy grabbed the lead on the second lap and pulled away to win easily in 1:53.95, completing a sweep of the backstroke events.

Pebley held on for the second spot, touching in 1:54.77 to earn his first trip to the Olympics.

Clary was next at 1:55.33. He clung to a lane rope while Murphy and Pebley celebrated, before swimming over to congratulate them both.

"That's it," Clary said. "I couldn't be happier to be sending Team USA off with two backstrokers that I have a lot of respect for, and I know they are going to represent Team USA well in Rio."

There was another sweep in the women's breaststroke, where Lilly King added a 200 victory to her earlier triumph in the 100. The 19-year-old from Indiana won in 2:24.08, while Molly Hannis claimed the second Rio spot at 2:24.39, giving the U.S. team yet another Olympic rookie.

Then again, it wasn't totally a night for the upstarts.

Anthony Ervin and Nathan Adrian were the top two qualifiers in the semifinals of the 50 freestyle. The 35-year-old Ervin led the way in 21.55, while Adrian was second quickest in 21.60. Both men are already on the team, with Ervin still seeking an individual event to go with his relay duty and Adrian set to defend his 100 free title from the London Games.

Don't forget Cullen Jones, a silver medalist in this event four years ago. The 32-year-old was third quickest in 21.93.

Katie Ledecky's bid to add another relay to her Rio program took a big blow when she finished seventh in the 100 freestyle. Abbey Weitzeil (53.28) and Simone Manuel (53.52), a pair of 19-year-olds heading to their first Olympics, earned the individual spots. Olympic veterans Amanda Weir, Lia Neal, Allison Schmitt and Dana Vollmer took the next four spots to put themselves at the head of the 4x100 free relay pool.

Ledecky will likely have to settle for three individual events and one relay at these games. Her sprinting still needs a bit of work.

"I would've loved to have gone faster, but I'll take it," she said.

Phelps has locked up two individual events for Rio, having already qualified in the 200 butterfly. He returned about 30 minutes after his victory over Lochte to post the sixth-fastest time in the semifinals of the 100 fly.

That was good enough to send Phelps to the final Saturday night — his final event of the trials.

Then it's on to Rio, where one more race with Lochte awaits.