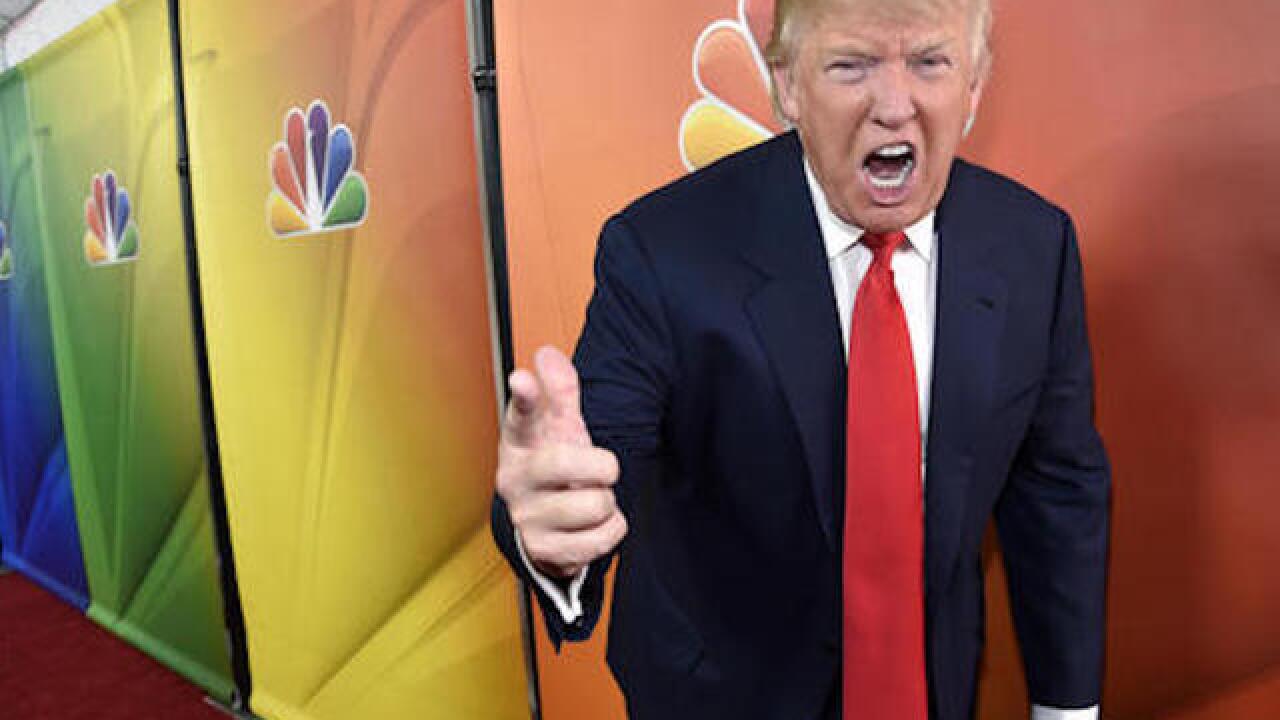 Copyright Associated Press
Chris Pizzello
<p>In this Jan. 16, 2015 file photo, Donald Trump, host of the television series "The Celebrity Apprentice," mugs for photographers at the NBC 2015 Winter TCA Press Tour in Pasadena, Calif. NBC on Monday, June 29, 2015 said that it is ending its business relationship with Trump, now a Republican presidential candidate, because of comments he made about immigrants during the announcement of his campaign. (Photo by Chris Pizzello/Invision/AP, File)</p>

By: Associated Press
Posted at 9:59 PM, Oct 12, 2016
SAN FRANCISCO (AP) — With public clamor growing for the release of footage from Donald Trump's reign on "The Apprentice," entertainment giant MGM said Wednesday that it owns the reality TV show, not the program's executive producer Mark Burnett, and could not unilaterally release any unaired, archived material due to existing contractual obligations.
MGM attorney Marvin S. Putnam said in a statement that such agreements "typically contain provisions related to confidentiality and artists' rights." He said MGM, which purchased Mark Burnett Productions in December, would honor those rights.
In the same joint statement, Burnett said he has never been a supporter of Trump's candidacy. He said he felt compelled to issue that statement because of what he called "false media reports" about his supposed support. He said that he and his wife "reject the hatred, division and misogyny" that have been "a very unfortunate part" of Trump's campaign.
On Monday, in a joint statement, Burnett said that he doesn't have the ability or the right to release footage from the long-running show hosted by the Republican presidential nominee.
MGM said, "Various contractual and legal requirements also restrict MGM's ability to release such material."
Wednesday's statement came in response to repeated Associated Press requests since Monday for elaboration of why the footage was still being kept private.
The AP previously had asked Burnett to provide original "Apprentice" footage for review, and asked again last week, after publishing a story detailing statements by former cast and crew that Trump frequently used lewd, demeaning and sexist language while on set and pointed out which contestants he would like to have sex with.
MGM and Burnett also did not answer questions regarding whether Trump has any contractual or rights-related authority that would prevent release of any unaired material.
Trump campaign spokeswoman Hope Hicks did not respond to emails and calls seeking information about whether Trump had any control over the footage.
In the meantime, public pressure continued to mount from former contestants, Democrats and a prominent attorney for someone to release whatever raw footage exists from 14 seasons of programming.
The call for disclosure has been gradually increasing since Friday's release of a separate recording on which Trump talks about aggressively groping women on a different show, "Access Hollywood," as the candidate prepared to appear on a soap opera.
On the tape, the married Trump brags about kissing and trying to have casual sex with women, even ones who are married. He also used vulgar slang to describe how, if you are a star, you can grab a woman's genital area. Trump has since apologized, but also described his comments as "locker room talk" and dismissed them as a distraction.
A petition posted on MoveOn.org by the national women's advocacy organization UltraViolet Action calling for the footage to be disclosed had gathered more than 180,000 signatures by Wednesday afternoon. A Hillary Clinton supporter has offered to pay leakers' legal fees, while more than 1,000 supporters had given $33,000 to a separate crowdfunded campaign to compensate possible whistleblowers by Wednesday.
Attorney Gloria Allred, who has represented many women making sexual abuse claims, including Bill Cosby accusers, delivered a letter Wednesday asking for a meeting with Burnett and MGM executives to discuss any legal restrictions on why unaired footage from "The Apprentice" could not be released.
The letter states that the unaired footage would show Trump's conduct while filming the NBC series, and its contents are of "extreme public importance."
Allred, a Democrat, said women had contacted her about inappropriate conduct by Trump before and after the "Access Hollywood" footage surfaced Friday Allred said she could not discuss the women's allegations because they had not given her authorization to do so.
It could not be determined which, if any, of the incidents described by former contestants and crew in the original AP story had been recorded or occurred when cameras were not operating, or whether any comments that could have been recorded still exist in an archive.
NBC has stated that it does not own the "Apprentice" footage, and only licenses it from Burnett for broadcast. A spokeswoman previously said she did not know if NBC had any footage in storage, but that if the network did, it could not legally release it.
Copyright 2016 The Associated Press. All rights reserved. This material may not be published, broadcast, rewritten or redistributed.