Mexicans march against Trump: 'Bad hombre for the whole world' 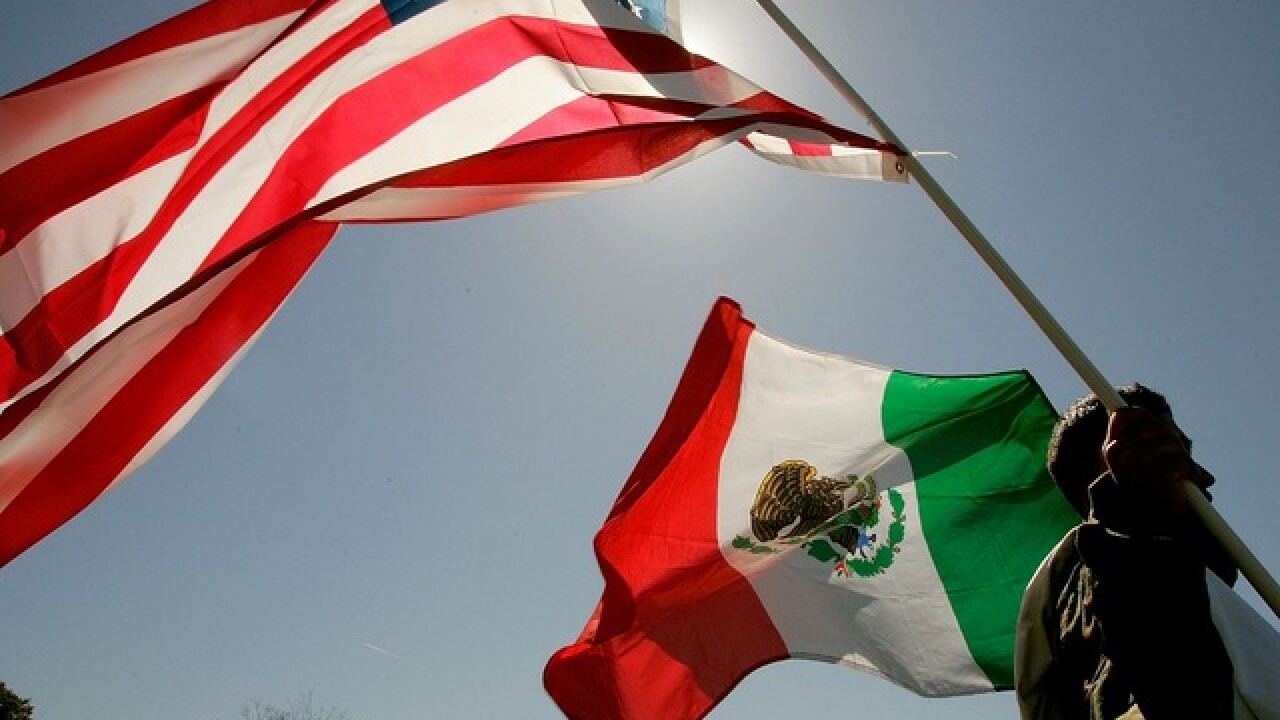 Copyright 2017 Scripps Media, Inc. All rights reserved. This material may not be published, broadcast, rewritten, or redistributed.
Mark Wilson

By: CNN
Posted at 4:30 PM, Feb 12, 2017
MEXICO CITY (CNN) -- Mexicans took to the streets Sunday to air their grievances against President Donald Trump and to protest corruption in their home country.
Two separate demonstrations, which together drew an estimated 20,000 people, merged on Mexico City's main avenue, Paseo de la Reforma, in a march mostly focused on the new US President.
Marchers convened on the avenue near the US embassy, where riot police and barricades were staked out. A sea of Mexican flags and anti-Trump signs surrounded one of the city's main monuments, the Angel of Independence, a block from the embassy. One man burned a doll of Trump, drawing smiles from the crowd.
'Mexico has never been so threatened'
Some marchers wore shirts that read "Nasty Woman Keep Fighting."
"We are sending a message to Donald Trump: No wall. No immigrant raids. No aggression to Mexico," said Denise Dresser, a professor in Mexico City who made 350 of the shirts with donations. "Mexico has never been so threatened and never have we had a government so incompetent."
The march comes amid protests in the United States against Trump and the administration's deportations of undocumented immigrants as well as his executive order barring travelers from seven Muslim-majority nations from entering the country.
Trump argued Sunday that the deportations should come as no surprise. "The crackdown on illegal criminals is merely the keeping of my campaign promise," the President tweeted.
Speaking about Trump on Sunday, Mexicans young and old pulled no punches, saying the President's rhetoric towards women, Mexicans and Muslims is among their top concerns.
"He's pathetic. He's a very little man, and I'm sure he's insane," said protester Ines Carrasco, 25. "What concerns me most is that he's spewing hate."
Trump's treatment of undocumented immigrants was the prime complaint among the protesters. His plan to make Mexicans pay for a border wall has also drawn the ire of many here.
"No, you're going to pay for the wall," said Alberto Madero, 59, holding a sign that read "We will not pay for your [expletive] wall."
Beyond immigration, protesters were also concerned about the possibility of new taxes on Mexican goods and remittances, as well as the prospect of the United States withdrawing from a trade deal with Mexico.
Some simply don't understand why Trump has focused so much of his criticism on Mexico.
"I'm worried about Trump. He's a racist, he's discriminating against us," said Ruben Rua, 58. "What have we done to the United States for them to treat us like this?"
Nearly 80% of Mexicans believe relations between the US and Mexican will be worse in the Trump era than during President Obama's term in office, according to a poll conducted last month by Mexican newspaper El Universal.
Anger against President Peña Nieto
Some of the protesters were also marching against the Mexican government. President Enrique Peña Nieto only has a 12% approval rating -- the lowest any Mexican President has had since polls were first collected in 1995.
Mexicans waved flags that read "Fuera Peña" or "Peña Out." Accusations of government corruption, coupled with anger over his handling of the disappearance of 43 Mexican students in 2014, have sunk his approval ratings. Protests against his administration have been a recurring event in the capital in recent months.
Also harming Peña Nieto's popularity this year was his administration's decision to increase gas prices as much as 20% in January, as part of a plan to deregulate the energy sector.
The price hike -- dubbed 'el gasolinazo' -- sparked violent protests across Mexico, resulting in at least 1,500 arrests and six deaths in the first month of the year. Protests got so out of hand in Tijuana last week that US authorities decided to temporarily close the border.
Another price hike is scheduled for next week. The initial increase in gas prices triggered a ripple effect of higher prices for food and public transportation.
Mexican citizens in United States warned to 'take precautions'
Sunday's march also came as citizens are rallying behind a Mexican mother who was deported Thursday and separated from her two American children.
Guadalupe Garcia de Rayos was deported after a routine check-in with an office of the US Immigration and Customs Enforcement in Phoenix.
US immigration officials say there was nothing special about the case of Garcia de Rayos. Prior to Thursday, she had checked in with the immigration office seven times since a 2008 arrest for using a fake social security number.
On Friday, Mexico's foreign ministry warned its citizens in the US to "take precautions" and keep in touch with Mexican consulates in America, citing Garcia de Rayos as a cautionary tale.
"The case involving Mrs. Garcia de Rayos illustrates a new reality for the Mexican community living in the United States, facing the most severe implementation of immigration control measures," Mexico's Foreign Ministry said in a statement Friday.
On Sunday, marchers like Maria Eugenia Montes de Oca used Trump's own words to protest against him.
"Trump: Bad hombre for the whole world," Montes de Oca's sign read.
Flora Charner contributed reporting to this story
The-CNN-Wire
™ & © 2017 Cable News Network, Inc., a Time Warner Company. All rights reserved.
KNXV