Many top Republicans rebuke Trump over comments at Putin summit 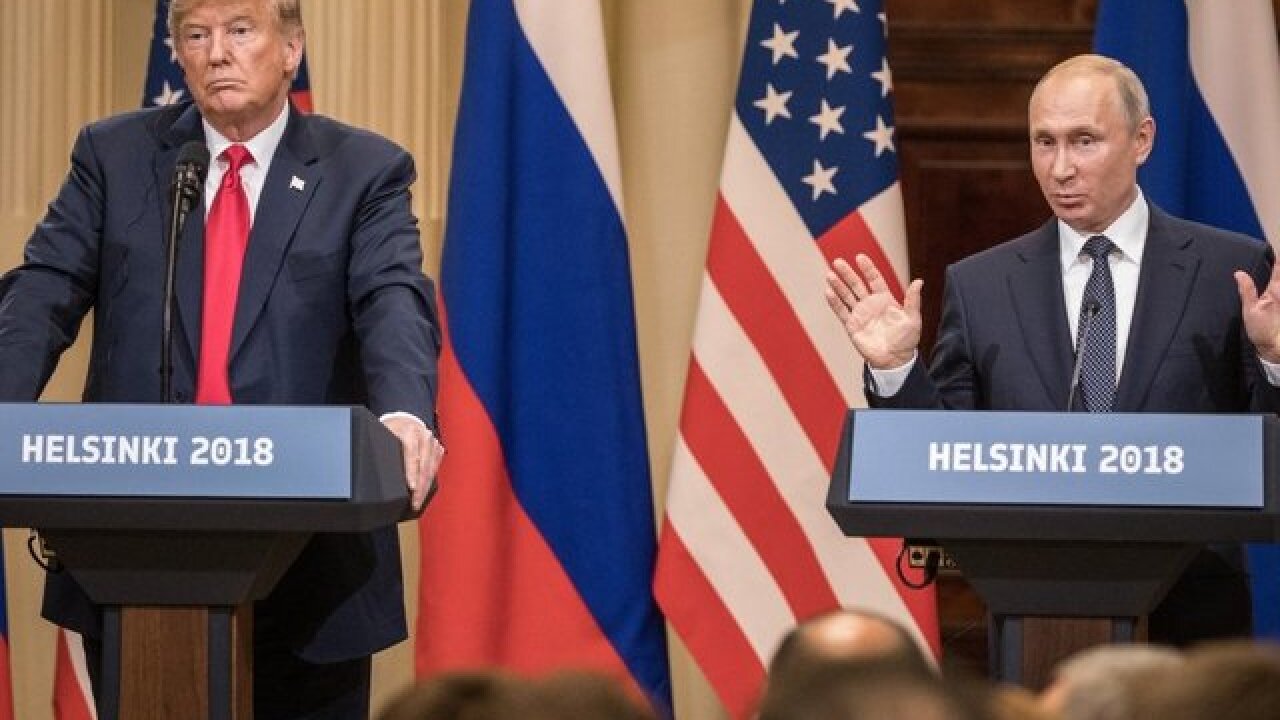 After President Donald Trump's stunning news conference Monday next to Russian President Vladimir Putin, members of Congress -- including some powerful Republicans -- were quick to rebuke Trump's performance on the world stage and Trump's refusal to call Putin out for interfering in the US election.

House Speaker Paul Ryan contradicted several comments Trump made during his Helsinki news conference, most notably backing the US intelligence community assessment that Russia meddled with the US 2016 presidential election.

"There is no question that Russia interfered in our election and continues attempts to undermine democracy here and around the world," said Ryan, a Republican from Wisconsin, in a statement. "That is not just the finding of the American intelligence community but also the House Committee on Intelligence."

Ryan continued, "The president must appreciate that Russia is not our ally. There is no moral equivalence between the United States and Russia, which remains hostile to our most basic values and ideals. The United States must be focused on holding Russia accountable and putting an end to its vile attacks on democracy."

"I've said a number of times and I say it again, the Russians are not our friends and I entirely believe the assessment of our intelligence community," the Kentucky Republican said. He did not answer a question on whether he would tell Trump that he disagreed with him.

Sen. John McCain, an Arizona Republican who has consistently criticized the President, said Trump's comments were "one of the most disgraceful performances by an American president in memory."

Senate Foreign Relations Chairman Bob Corker said the President "made us look like a pushover" and that Putin was probably eating caviar on the plane home.

"I was very disappointed and saddened with the equivalency that he gave between them (the US intelligence agencies) and what Putin was saying," said Corker, a Tennessee Republican who is not seeking re-election.

Trump's comments that appeared to equivocate Putin's denial of Russian election meddling and the US intelligence community's assessment were commonly evoked in the steady stream of criticism. Republican Sen. Ben Sasse, a Republican from Nebraska, issued a blistering statement just minutes after the press conference wrapped.

Sasse rebuked Trump's statement that he held "both countries responsible" for the deteriorated relationship between the United States and Russia.

"This is bizarre and flat-out wrong. The United States is not to blame. America wants a good relationship with the Russian people but Vladimir Putin and his thugs are responsible for Soviet-style aggression," Sasse said in the statement. "When the President plays these moral equivalence games, he gives Putin a propaganda win he desperately needs."

Some Republicans 'deeply troubled' by Trump

Some Republicans in both the House and Senate -- even some typically seen as allies to the President -- said in the hours following the news conference that they were concerned over what they heard Monday.

"As a member of the House Armed Services Committee, I am deeply troubled by President Trump's defense of Putin against the intelligence agencies of the U.S. & his suggestion of moral equivalence between the U.S. and Russia. Russia poses a grave threat to our national security," said Rep. Liz Cheney, a Wyoming Republican.

Rep. Trey Gowdy, a South Carolina Republican who was among the Republicans leading last week's sharply partisan hearing of FBI agent Peter Strzok, made clear Monday he did not see Russia as a US ally.

"I am confident former CIA Director and current Secretary of State Mike Pompeo, DNI Dan Coats, Ambassador Nikki Haley, FBI Director Chris Wray, Attorney General Jeff Sessions and others will be able to communicate to the President it is possible to conclude Russia interfered with our election in 2016 without delegitimizing his electoral success," Gowdy said in a statement.

"It's certainly not helpful for the President to express doubt about the conclusions of his own team," Collins told reporters. "He has assembled a first-rate intelligence team handled by Dan Coats and I would hope that he would take their analysis over the predictable denials of President Putin."

Sen. Lindsey Graham, a Republican from South Carolina who has had a close working relationship with Trump on issues related to health care and tax reform, tweeted that the summit was a "missed opportunity."

"Missed opportunity by President Trump to firmly hold Russia accountable for 2016 meddling and deliver a strong warning regarding future elections," Graham tweeted. "This answer by President Trump will be seen by Russia as a sign of weakness and create far more problems than it solves."

Graham also warned Trump to leave a soccer ball, a gift from Putin, outside of the White House.

"If it were me, I'd check the soccer ball for listening devices and never allow it in the White House," Graham said.

Arizona Sen. Jeff Flake, a Republican who has been constant critic, called the President's performance "shameful."

"I never thought I would see the day when our American President would stand on the stage with the Russian President and place blame on the United States for Russian aggression. This is shameful," tweeted Flake, who is not running for re-election.

Rep. Will Hurd, a Republican from Texas, said, "The President is wrong."

"As a former CIA officer and a Congressman on the House Intelligence Committee, I can affirmatively say there is nothing about agreeing with a thug like Putin that puts America First," Hurd tweeted. "The President is wrong. Russia interfered in the 2016 election and seeks to undermine our democracy."

Illinois Republican Rep. Adam Kinzinger called Trump's comments rebuking the US intelligence community assessment "a disservice," though he did not mention Trump by name.

"The American people deserve the truth, & to disregard the legitimacy of our intelligence officials is a disservice to the men & women who serve this country. It's time to wake up & face reality. #Putin is not our friend; he's an enemy to our freedom," Kinzinger tweeted.

The responses came after Trump declined to endorse the US intelligence community's finding that the Russians interfered in the 2016 US election.

Instead, Trump said Putin was "extremely strong and powerful" in his denial.

"I have confidence in both parties," Trump said of Russia and the US intelligence community.

"I have real confidence in my intelligence people, but I must tell you that President Putin was extremely strong and powerful in his denial," Trump said.

A senior GOP congressional aide told CNN it's "shocking he would disrespect our intel community on foreign soil. Next to Putin."

Utah Republican Sen. Orrin Hatch, a key Trump ally, issued a statement backing up the intelligence community, but did not directly criticize the President.

"Russia interfered in the 2016 election," Hatch said in a statement. "Our nation's top intelligence agencies all agree on that point. From the President on down, we must do everything in our power to protect our democracy by securing future elections from foreign influence and interference, regardless of what Vladimir Putin or any other Russian operative says. I trust the good work of our intelligence and law enforcement personnel who have sworn to protect the United States of America from enemies foreign and domestic."

"I strongly disagree w/ statement that Russia did not meddle in 2016 election. With all I have seen on House Intel Comm & additional indictments of 12 Russian officers last week, it is clear Russia's intentions. President Trump missed opportunity to hold Putin publicly accountable," tweeted LoBiondo, who is not running for re-election.

Senate Minority Leader Chuck Schumer said Trump "took the word of the KGB over the men and women of the CIA."

He called on Republicans to speak out.

"In the entire history of our country, Americans have never seen a president of the United States support an American adversary the way President Trump has supported President Putin," the New York Democrat said at a news conference.

Senate Intelligence Committee Vice Chairman Mark Warner, a Democrat from Virginia, tweeted "for the President to side with Putin over his own intelligence officials and blame the United States for Russia's attack on our democracy is a complete disgrace."

Sen. Elizabeth Warren, a Democrat from Massachusetts, said Trump embarrassed the US.

"Once again, @realDonaldTrump takes to the international stage to embarrass America, undermine our institutions, weaken our alliances, & embrace a dictator. Russia interfered in our elections & attacked our democracy. Putin must be held accountable -- not rewarded. Disgraceful," Warren tweeted.

Tim Kaine, a Democrat from Virginia, tweeted that someday the US would "turn the page on this dark chapter," but it would not be easy.

"This is a sad, shameful moment for our great nation. We will reclaim our values and reassert our global leadership. We'll turn the page on this dark chapter. But it won't happen on its own. We all must stand up—to side with U.S. law enforcement and to protect all Americans," Kaine said.

This story has been updated with additional developments.