Man who threw beer can at Jays game charged 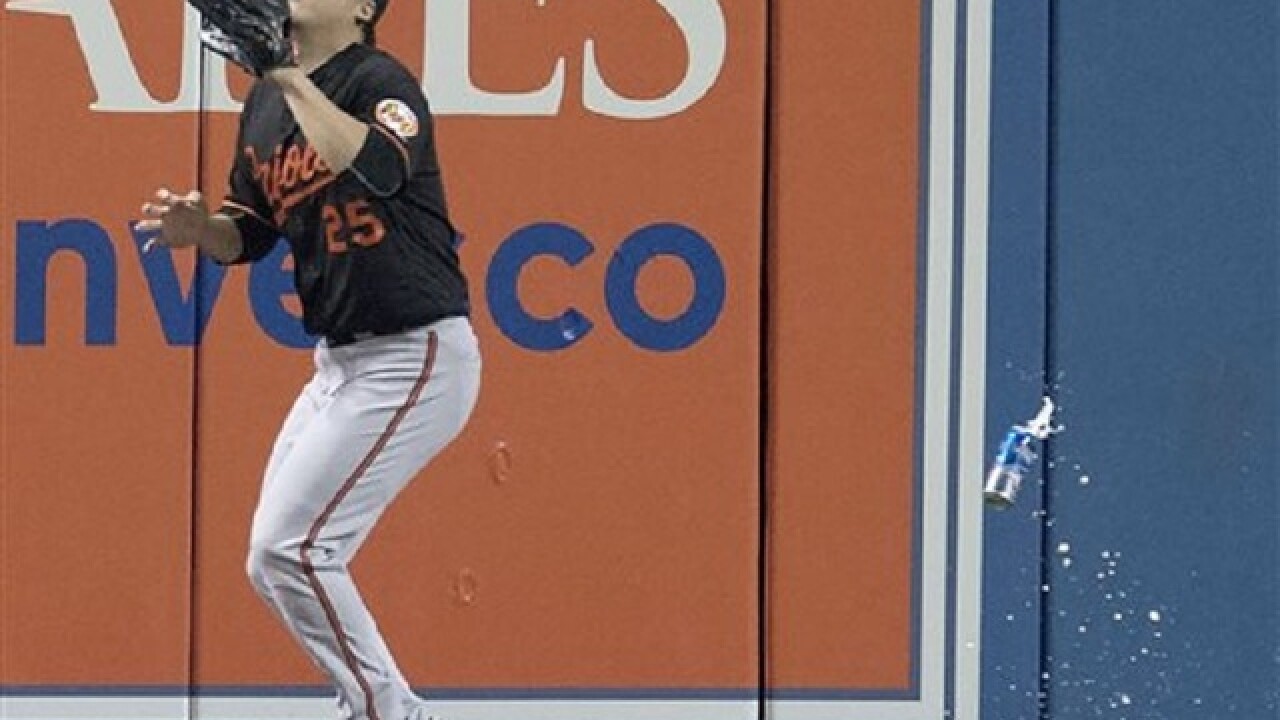 Mark Blinch
<p>Baltimore Orioles' Hyun Soo Kim gets under a fly ball as a can falls past him during the seventh inning of an American League wild-card baseball game against the Toronto Blue Jays in Toronto, Tuesday, Oct. 4, 2016. (Mark Blinch/The Canadian Press via AP)</p>

By: Associated Press
Posted at 5:57 PM, Oct 06, 2016
TORONTO (AP) — The man who threw a beer at Baltimore outfielder Hyun Soo Kim during the seventh inning of Tuesday night's AL wild card game has been charged with mischief.
Ken Pagan, a 41-year-old copy editor for Postmedia, reported to a police precinct Thursday evening. He was later released and is due in court in late November.
Pagan contacted police Wednesday evening after police released a photo of him.
Toronto police said Thursday they are sure they have the right man. "We are confident we have made a positive ID and we will continue to work with the Rogers Centre to further the investigation?," Police spokeswoman Meaghan Gray said.
Postmedia Network spokeswoman Phyllise Gelfand confirmed Pagan is a copy editor for the news organization and said it is conducting an investigation but has not reached conclusions.
Toronto police detective Pat Alberga said security camera footage inside the stadium helped identify the suspect.
But in a report published by the Toronto Sun, which is owned by Postmedia, Pagan suggested police may be wrong. Pagan told the Toronto Sun he was "drinking out of a cup" during the game. He also said photos posted on Twitter that show him after the can was tossed clearly indicate he had a cup in his hand.
Tyler Smith, Pagan's lawyer, said outside the police station that Pagan is going to wait until court to have his say.
Major League Baseball has spoken with the Jays about banning cans from the seats at Rogers Centre and wants officials in Canada to prosecute the fan. Baseball Commissioner Rob Manfred said he didn't think there is another big league ballpark where beer is served in cans. Toronto said it is planning tougher security measures and alcohol policies at Rogers Centre. Toronto also apologized to the Orioles and pledged to help authorities identify the spectator.
Blue Jays fans tossed bottles and debris on the field during Game 5 of last year's AL Division Series against Texas, upset by the call that let Rougned Odor score from third after catcher Russell Martin's throw back to the mound deflected off Shin Soo Choo's bat. A baby was narrowly missed by one beer can.
A fan in Toronto also threw a drink at Orioles outfielder Nate McLouth during a game at Rogers Centre in May 2013. Canadians have a reputation for being polite but Blue Jay fans have increasingly earned a reputation for drunken, boorish behavior.
"Hey, whatever happened to polite Canadians?" author Stephen King tweeted.
Copyright 2016 The Associated Press. All rights reserved. This material may not be published, broadcast, rewritten or redistributed.