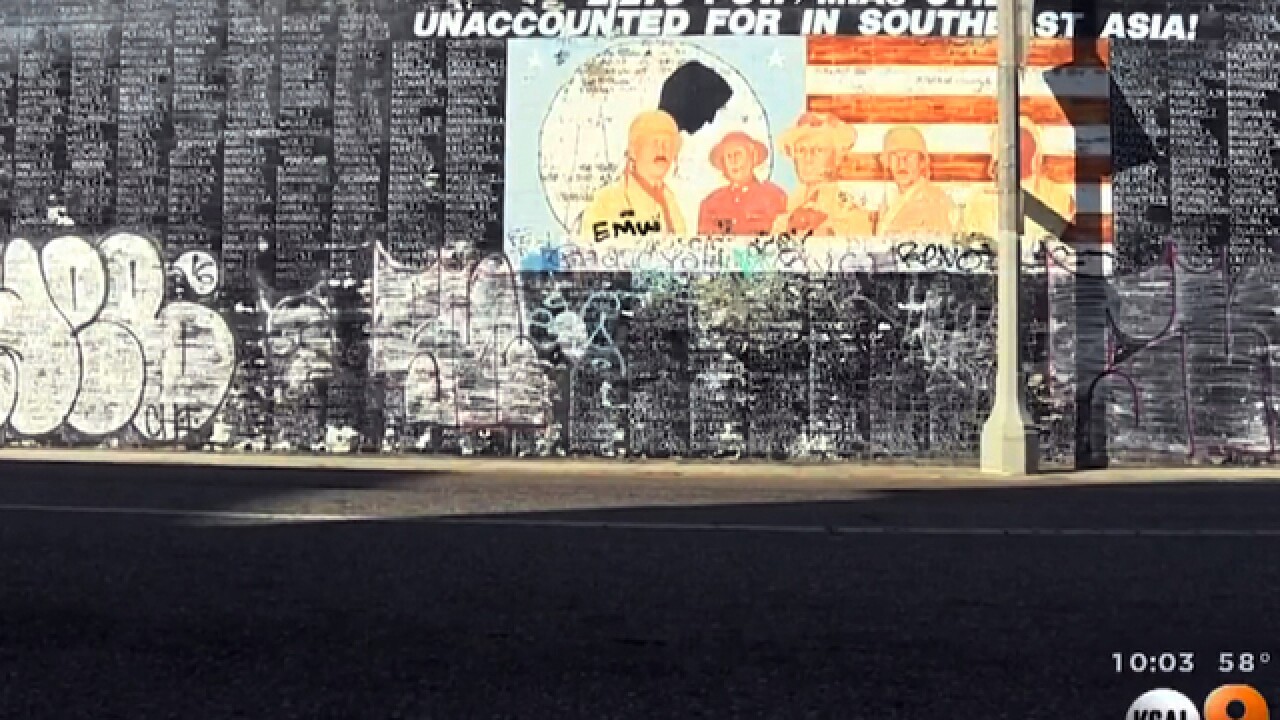 KCBS-TV/KCAL-TV via AP
KCBS-TV/KCAL-TV via AP
<p>This Friday, May 27, 2016 image from video provided by KCBS-TV/KCAL-TV shows graffiti on a Vietnam War memorial in the Venice area of Los Angeles. The homespun memorial painted on a block-long wall on Pacific Avenue lists the names of American service members missing in action or unaccounted for in Southeast Asia, painted by a Vietnam veteran and dedicated in 1992. The wall has been tagged previously but the latest vandalism - within the past week - covers the bottom half of the memorial for much of its length.</p>

LOS ANGELES (AP) — A pair of Marines on leave from their base in California's high desert answered the Memorial Day call on Monday, bringing dozens of American flags to try to dress up a vandalized Vietnam War memorial until it can be repaired.

The wall, adjacent to a Metropolitan Transportation Authority bus yard in the city's Venice Beach section, was tagged earlier in the week. Metro officials said Monday they had hoped to work with community volunteers to clean it up quickly but discovered it was too badly damaged.

"We were initially hopeful that the graffiti could be removed without damaging the memorial, but Metro's contractor says the damage is too extensive," the agency said in a statement.

Metro workers instead covered it with a tarp until it can be repaired.

That's when Pfc. Joseph Dudley showed up with a friend and the flags, arriving from the Marine Corps Air Ground Combat Center in Twentynine Palms, California, where he's stationed.

"Me and my buddy, we were down in Venice Beach with my parents for the weekend and we heard what happened so we bought $100 worth of flags and are just down here to try to hang them up. Just to kind of give back to the people who are on the wall," he said.

The memorial, dedicated in 1992, contains the names of 2,273 prisoners or soldiers missing in action from the Vietnam War. It was spray-painted from one end to the other with large graffiti tags. Metro officials said many of its names will have to be re-inscribed.

"All of a sudden for this to happen after almost 30 years is just appalling," said construction contractor Jon Scudder, himself a Marine veteran.

Scudder had hoped he and other volunteers could repair it by Monday, but now they'll have to wait.

"It's like putting graffiti on the wall in Washington," he said of the national Vietnam War Memorial. "You just don't do that. I don't what's going on in people's minds."