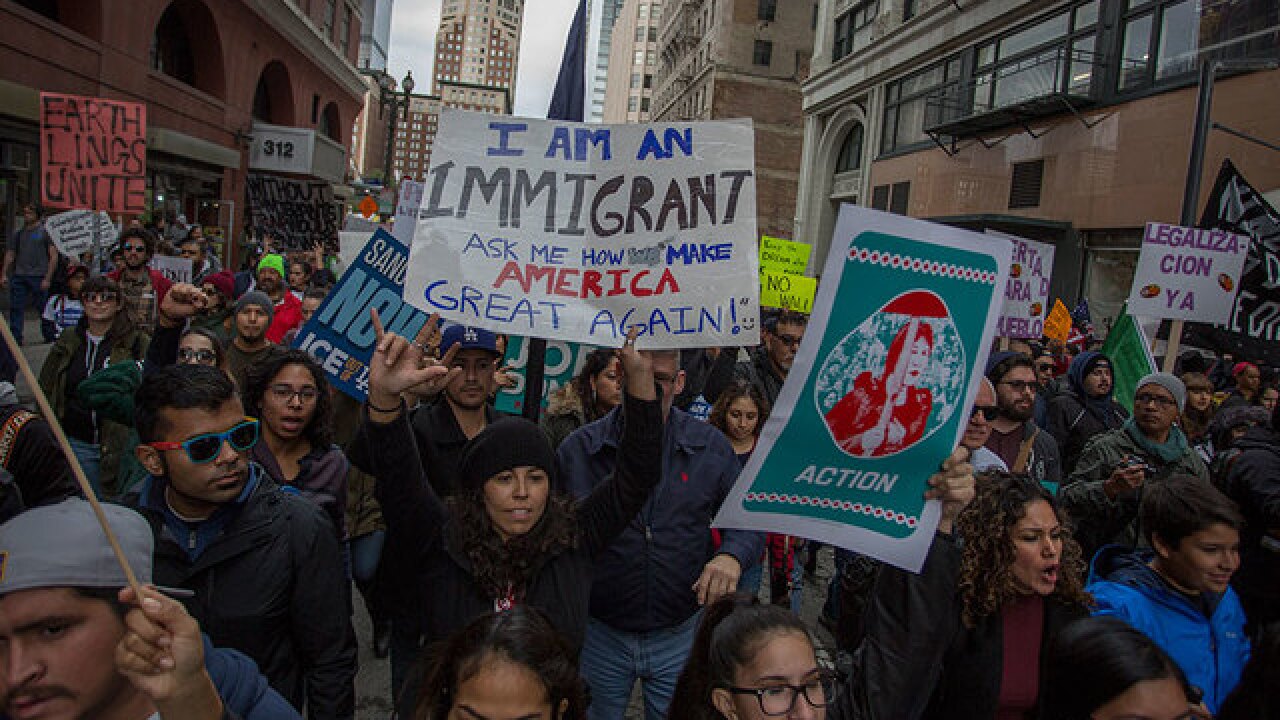 Image copyright 2017 Getty Images. All rights reserved. This material may not be published, broadcast, rewritten, or redistributed.
<p>Protesters participate in the Immigrants Make America Great March in Los Angeles on Feb. 18, 2017. (Photo by David McNew/Getty Images)</p>

(CNN) -- It's a detail that stands out in photos of recent immigration roundups across the country: federal agents wearing clothing that labels them as "police."

Immigration and Customs Enforcement officials say it's an accurate word for them to use, and it can mean the difference between life and death in volatile situations.

But elected officials in Los Angeles say they want the practice to stop. When ICE officers call themselves "police," they claim, it's misleading and endangers public safety.

How long has this been happening? What's the debate? And why is it coming up now?

It isn't new for ICE officers and agents to refer to themselves as police.

Photos of operations dating back years show them wearing jackets and vests with that label, usually in large letters that read, "POLICE ICE."

Sarah Rodriguez, an ICE spokeswoman, says ICE agents may sometimes verbally identify themselves as police when they're going into a situation.

This approach has drawn renewed criticism from activists and some officials amid heightened publicity about immigration crackdowns since President Donald Trump took office.

Several Los Angeles leaders are asking immigration officials to put a stop to the practice, calling it "corrosive." They argue it undercuts years of police efforts to build trust in immigrant communities and will make witnesses and victims less likely to come forward when crimes are committed.

"Especially in these turbulent and uncertain times, we urge that ICE agents operating in Los Angeles immediately stop representing that they are 'police' officers," the city's mayor, attorney and City Council president wrote in a letter last month.

The elected officials said they sent the letter after seeing a Los Angeles Times report about the practice. That article's headline: "It's legal for an immigration agent to pretend to be a police officer outside someone's door. But should it be?"

Rodriguez, the ICE spokeswoman, says the term "police" is accurate and there's nothing misleading about using it.

"It's clear that we are a law enforcement agency," she said. "We have police authority."

He pointed to a recent example that drew widespread attention: a video of ICE agents -- wearing jackets that say only "police" -- arresting a father who was dropping off his kids at a Los Angeles school.

"That, too, sends a chilling message to our immigrant communities," he said.

"Local law enforcement in our Congressional district have expressed serious concerns that this practice causes confusion and undermines their officers' efforts to build trust in our immigrant communities," the letter said. "We respectfully urge you to direct ICE to remove the word 'Police' from all ICE gear."

This dispute is just one of the ways some local and federal authorities are sparring over immigration.

The larger battlefront on the horizon: debate over so-called sanctuary cities.

It's a broad term describing local governments that have enacted policies limiting their cooperation with federal immigration enforcement. Their goal: to protect undocumented immigrants who are not otherwise engaged in criminal activity from being detained or deported.

In Los Angeles, for example, police have a policy of not stopping people solely to find out their immigration status. It's been in place since 1979.

"Your status has nothing to do with your contact with Los Angeles Police Department," Beck said. "We will not give you to ICE. We will not refer you to ICE."

Those who support sanctuary policies say they build trust with local law enforcement and keep communities safer. ICE has said such policies inhibit their ability to enforce laws.

This much is clear: The fight's not over.

Trump signed an executive order in January pledging to block sanctuary jurisdictions from receiving federal grant money. Leaders of sanctuary cities across the country have vowed not to back down.

Legal experts say it's likely the two sides will face off in court.