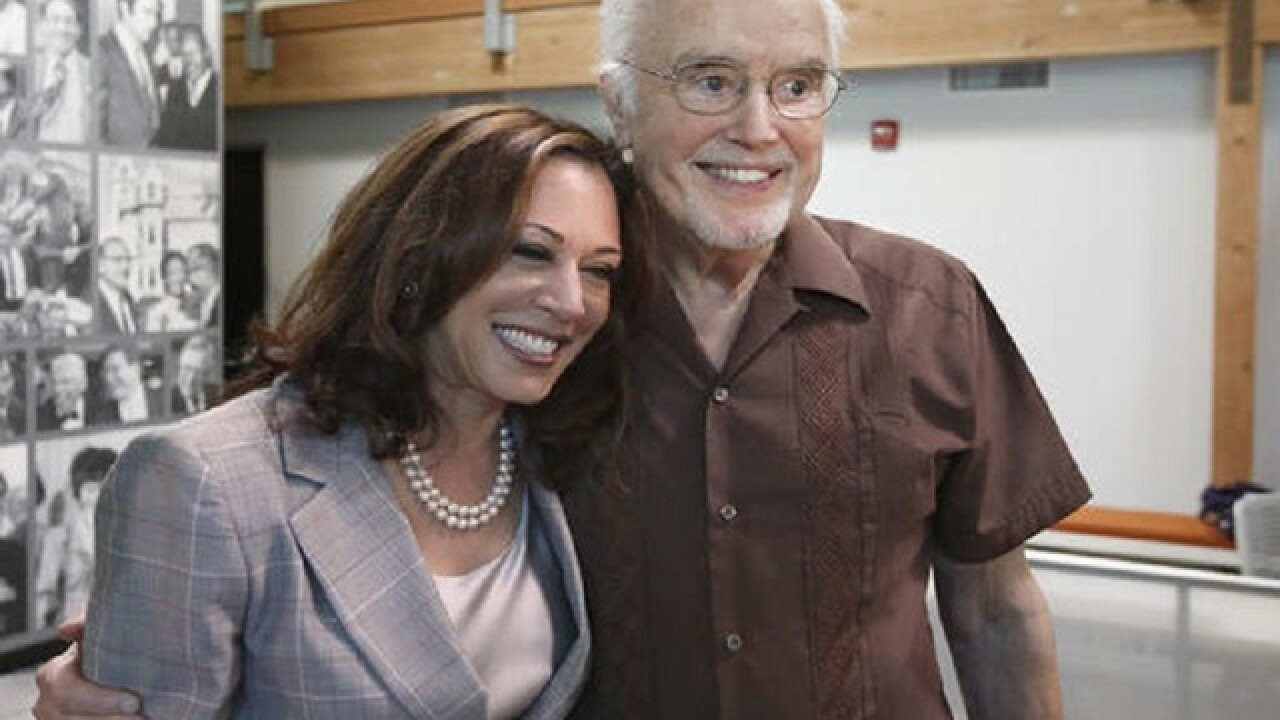 Rich Pedroncelli
<p>California Attorney General Kamala Harris, a candidate for the U.S. Senate, is hugged by California Democratic Party Chairman John Burton during her visit to the state party headquarters on election day, Tuesday, June 7, 2016, in Sacramento, Calif. Harris is running against fellow Democrat Rep. Loretta Sanchez, among others, to replace Barbara Boxer who is retiring. (AP Photo/Rich Pedroncelli)</p>

LOS ANGELES (AP) — In a historic first, California voters Tuesday sent two minority women, both Democrats, to a November runoff for the state's open U.S. Senate seat.
The matchup between state Attorney General Kamala Harris and 10-term Congresswoman Loretta Sanchez marks the first time since voters started electing senators a century ago that Republicans will be absent from California's general election ballot for the Senate.
The two were among 34 candidates seeking the seat being vacated by retiring Sen. Barbara Boxer.
But under California election rules, only two candidates — the top vote-getters — advance to the November election.
Harris had a wide lead in early returns and was ahead in all but a handful of the state's 58 counties. Sanchez, from Orange County, was holding steady in second place.
"The stakes are high. The eyes of the country are on us, and I know we are prepared to do ourselves and our state and our fellow Californians proud," Harris told cheering supporters at a celebration rally.
With 3.4 million votes tallied, Harris had just over 1.4 million votes, or 40 percent. Sanchez was at 17 percent, with about 580,000 votes. Harris was performing strongly in the San Francisco Bay Area, her stronghold, but was also leading in strongly Hispanic Los Angeles County and was about tied with Sanchez in the congresswoman's home county, Orange.
Republican candidates were lagging in single digits. Duf Sundheim, a Silicon Valley lawyer and a former chairman of the California Republican Party, was leading a cluster of Republicans trailing the two Democrats.
In a year when millions of voters embraced outsider candidates in the presidential contest, California Senate voters appeared impressed with the two Democrats' deep experience.
Hoai Le, a 62-year-old mechanic from Santa Ana, said he was backing Sanchez because of her two decades in Congress.
"She's been there for a while. She knows how the system works," said Le, an independent, after casting his ballot at a community center. "She can do a lot better than the new guy."
Jeanette Wright of San Francisco, a 47-year-old executive assistant with the state, said she was impressed with Harris, a career prosecutor.
"She's a strong woman. She's been around. She knows what's going on with San Francisco. She knows what's going on with the community," Wright, a Democrat, said of the attorney general.
If elected this fall, Harris, the daughter of immigrants from India and Jamaica, would set historical marks. She would become the first Indian woman to hold a Senate seat and the second black woman elected to the Senate. Illinois Sen. Carol Moseley Braun was elected in 1992 and served one term.
Sanchez, if elected, could become one of the first Latinas to hold a U.S. Senate seat. Catherine Cortez Masto, who is also Hispanic, is the Democratic candidate for outgoing Sen. Harry Reid's seat in Nevada.
The fact that both spots could be taken by Democrats reaffirms the party's dominance in the nation's most populous state.
California once was a reliable Republican state in presidential elections. But the party has seen its numbers erode for years, and it now accounts for a meager 27 percent of registered voters.
Democrats control every statewide office and both chambers of the Legislature, while holding a registration edge of nearly 2.8 million voters.
With 12 Republicans on the ballot — and none widely known to voters — the GOP vote was splintered Tuesday, weakening the party's chances of advancing a candidate to November.
Still, a surprise is possible with a large field and polls showing many undecided voters.
As fellow Democrats, Harris and Sanchez hold similar positions on many issues, including abortion rights and immigration reform.
Harris, 51, a career prosecutor, has played up winning a big settlement with banks accused of improper mortgage foreclosures and her work to defend the state's landmark climate change law.
Sanchez, 56, has stressed her national security credentials built up during 10 terms in Washington.
Copyright 2016 The Associated Press. All rights reserved. This material may not be published, broadcast, rewritten or redistributed.