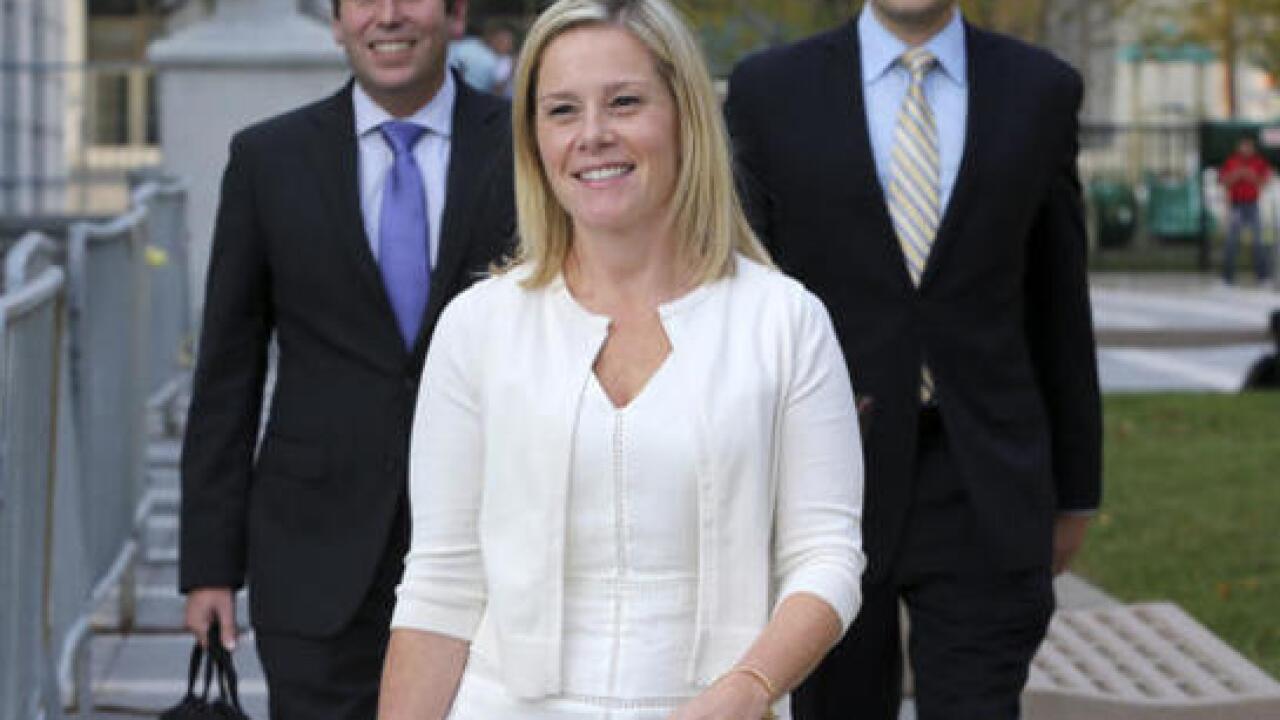 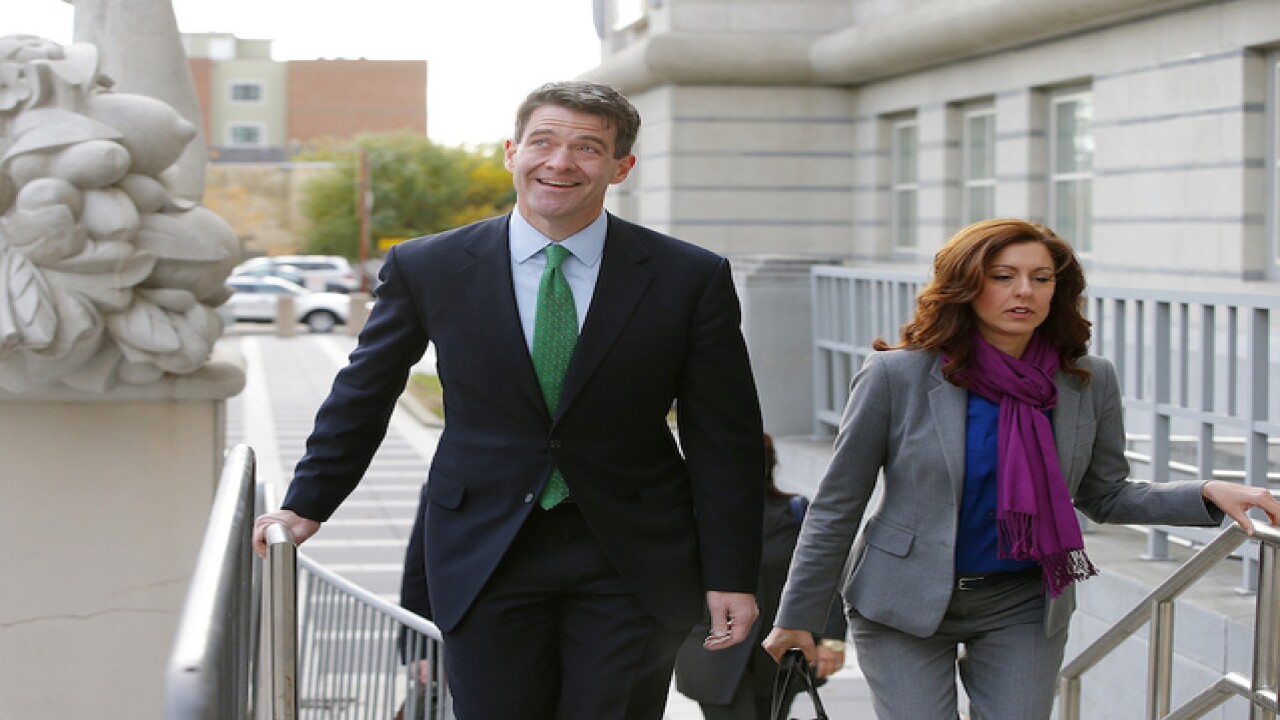 NEWARK, N.J. (AP) — Two former aides to Gov. Chris Christie were convicted Friday of creating an epic traffic jam at the George Washington Bridge for what prosecutors say was political revenge, capping a trial that cast doubt on Christie's claims he knew nothing about the scheme.

Bridget Kelly, Christie's former deputy chief of staff, and Bill Baroni, a Christie appointee to the Port Authority of New York and New Jersey, were found guilty of all counts against them.

Kelly cried as the verdict was read, while Baroni showed no emotion.

The most serious charges carry up to 20 years in prison. Sentencing was scheduled for Feb. 21.

The federal jury took five days to reach a verdict in the scandal that helped sink Christie's Republican campaign for president. The verdict came before the judge ruled on a request by defense attorneys to declare a mistrial in the case.

Christie has denied any knowledge of the scheme beforehand or while it was going on and has not been charged. A message left with Christie's office on Friday wasn't immediately returned. He later issued a statement.

Statement from @GovChristie on verdicts today in #bridgegate case pic.twitter.com/l66SeEQCpa

Democratic state Sen. Loretta Weinberg, who helped lead a legislative effort to investigate the lane closings, said it was a terrible day for New Jersey and "a terrible day to have a spotlight on the kind of administration that was run."

"Nothing shocks me about New Jersey anymore, but it saddens me," she said. "I think there's been a spotlight on the Christie administration. I said I didn't care if he knew about it before, during or after. He set the stage and people unfortunately got suckered in."

Prosecutors said Kelly and Baroni plotted with Christie ally David Wildstein to close lanes at the bridge and create gridlock in September 2013 to punish the Democratic mayor of Fort Lee for not endorsing Christie for re-election. Wildstein, a high-ranking Port Authority official, pleaded guilty to orchestrating the scheme and was the prosecution's star witness.

Kelly and Baroni testified they believed the lane closings were part of a legitimate traffic study because, they said, that was what Wildstein told them.

The defense portrayed Wildstein as a liar and a dirty trickster — "the Bernie Madoff of New Jersey politics" — and argued that Christie and his inner circle had thrown the 44-year-old Kelly under the bus.

"They want that mother of four to take the fall for them. Cowards. Cowards," Kelly attorney Michael Critchley said in a thundering closing argument.

One of the most damning pieces of evidence was an email in which Kelly wrote: "Time for some traffic problems in Fort Lee." Then, as the four days of gridlock unfolded and Fort Lee Mayor Mark Sokolich complained about children unable to get to school, she texted: "Is it wrong that I am smiling?"

On the stand, Kelly explained that she was referring to what she thought was a traffic study and expressing satisfaction that it was going well. As for why Kelly deleted the messages, her lawyer suggested she was afraid she was about to be made the scapegoat.

Kelly, Baroni and Wildstein all testified that Christie was informed about the lane closings either before or while they were going on, contrary to the governor's repeated denials.

Wildstein, for example, said that Christie was told about the traffic jam as it was happening and that he laughed and sarcastically joked that nothing political was going on when he learned of Sokolich's distress over not getting his calls returned.

But it was not clear from Wildstein's testimony whether Christie knew the bumper-to-bumper mess was manufactured for political reasons. And Kelly testified that she told Christie the lane-closings were a traffic study when she informed him of the plans about a month ahead of time.

Siding with prosecutors, U.S. District Judge Susan Wigenton told jurors they didn't have to find that Kelly and Baroni knowingly intended to punish Sokolich in order to convict them of conspiracy.

The gridlock at the foot of the nation's busiest bridge — a span that connects New Jersey to New York City — began on the first day of school and held up commuters, school buses and emergency vehicles. Sokolich's pleas went unanswered for four days — on orders from Wildstein, the defendants testified.

At the time, Christie was considered a top GOP presidential contender and was trying to run up a big landslide re-election victory to demonstrate his crossover appeal as a White House candidate.

Christie ultimately dropped out of the presidential race after a poor showing in the New Hampshire primary and said recently that the scandal probably influenced Donald Trump's decision not to pick him as his running mate. Christie is a now a top Trump adviser and has campaigned for him.

Christie was expected to campaign for Trump in battlegrounds Pennsylvania and New Hampshire this weekend. A message left with the Trump campaign Friday wasn't immediately returned.

While the trial did not definitively pin the scheme on Christie, it reinforced his reputation among his critics as a bully, with accounts of profane tirades, threats of bodily harm and tough-guy posturing among the governor and his inner circle that seemed straight out of "The Sopranos."

Christie once threw a water bottle at Kelly in anger, she testified. And Wildstein told the jury that Christie called him "Mr. Wolf," after the character in the movie "Pulp Fiction" who is called in to clean up dead bodies.

According to testimony, Christie's office also used the Port Authority to punish or reward local politicians. Among the goodies the agency dispensed were pieces of steel from the original World Trade Center, destroyed on 9/11.

"These convictions will be an essential defining feature of Christie's legacy in office, and will forever taint how his administration is perceived and will be remembered," Montclair State University political science professor Brigid Callahan said. "He is damaged by the narcissistic way in which he was portrayed during the trial, a narrative that was accepted by the jury."