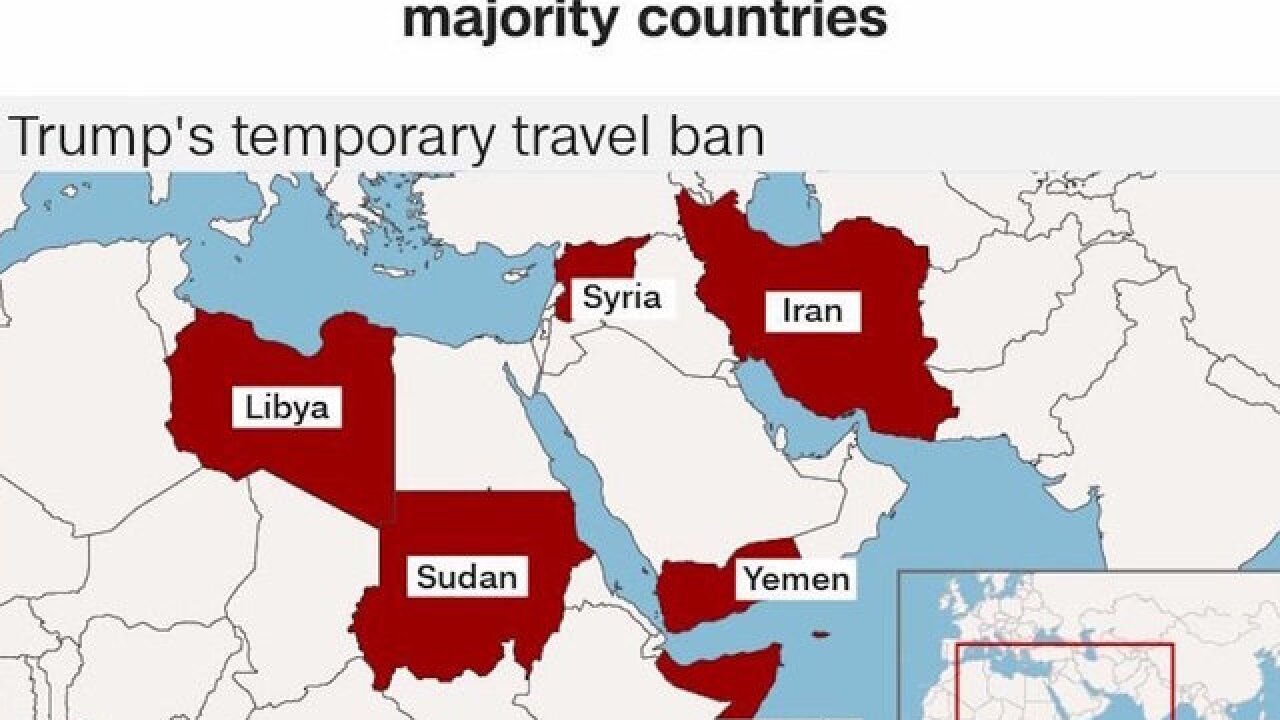 (CNN) -- President Donald Trump's new travel ban is scheduled to go into effect Thursday, but several federal judges across the country may decide its legal fate just hours before midnight.

Trump's new executive order bans foreign nationals from six Muslim-majority countries from entering the US for 90 days and bans all refugees for 120 days. But unlike his original executive order from January, those with green cards or valid visas are exempted from the ban.

Despite these changes, several states and immigration advocates say the new order still suffers from legal flaws and have asked federal judges to weigh in by issuing temporary restraining orders blocking the ban before Thursday.

Courts in Maryland and Hawaii agreed to hear oral arguments from both sides Wednesday and could issue decisions the same day.

Here are the issues at play:

How different is the new executive order?

Despite the fact that the President's senior policy adviser said the revised travel ban would have "mostly minor technical differences" from the iteration previously blocked by the courts, the Justice Department's position is crystal clear: the new executive order is "substantially different."

DOJ has argued in legal filings this week that challengers to the new order have no legal claim because: visa holders are now protected and exempted from the travel ban, the only foreigners who are excluded have no constitutional right to enter the US, and the new executive order contains "robust waiver provisions," granting entry on a case-by-case basis for those who do not pose a national security risk, in any event.

Yet several states have urged judges to see that the new order still contains a 90-day ban on foreign nationals from Muslim-majority countries and a 120-day ban on all refugees -- two aspects of the old executive order that were explicitly suspended by federal courts.

In other words, the sticking point in the new executive order could come down to whether a judge agrees -- at least for the limited purposes of a restraining order blocking the order's implementation temporarily -- that the challengers have sufficiently shown that it discriminates on the basis of religion.

Last time around, at least one federal judge in Virginia took note of Trump's campaign trail statements calling for a "complete shutdown of Muslims entering the United States," and concluded that the state had produced "unrebutted evidence" that the travel ban "was not motivated by rational national security concerns," but "religious prejudice" against Muslims.

DOJ strongly disagrees with any such reading of the new executive order.

"(The) text and purpose (of the new executive order) are explicitly religion neutral, and it no longer grants any preference for victims of religious persecution," Justice Department attorneys argued in a court filing Monday.

Several of the states challenging the new executive order claim that it harms tourism and negatively affects foreign students for public universities.

The Justice Department says that argument is "mere speculation."

For instance, "Hawaii does not identify any particular persons it seeks to recruit who have concrete plans to relocate to Hawaii and join a state university or agency -- let alone specific plans to do so in the next 90 days," DOJ attorneys argue in legal briefs. "Rather, the most Hawaii can say is that unidentified aliens might aspire to do so someday."

Yet the Ninth Circuit Court of Appeals, which tackled this threshold issue when evaluating the first executive order, saw no problem to states bringing the lawsuits -- at least for the initial stages of litigation.

"The necessary connection can be drawn in at most two logical steps: (1) the Executive Order prevents nationals of seven countries from entering Washington and Minnesota; (2) as a result, some of these people will not enter state universities, some will not join those universities as faculty, some will be prevented from performing research, and some will not be permitted to return if they leave," the appellate court wrote.

The question is whether courts this time will agree, especially since students or faculty members with existing valid visas are excluded from the new travel ban.

When the new executive order was signed last week, administration officials told reporters that the new order included a 10-day "phase-in" period to ensure that those traveling "aren't placed in legal jeopardy," and in the hopes of avoiding the "chaos" seen at airports after the first travel ban was signed.

But now that judges have scheduled hearings to hear challenges to the new order Wednesday -- just hours before it is slated to go into effect at 12:01 a.m. on Thursday -- travelers at airports could experience confusion once again if any judge blocks the new order, either in full or in part.

The Department of Homeland Security did not immediately respond to a request for comment for this story.

But immigrant rights groups say they are prepared and will have attorneys stationed at airports if travelers experience any problems.