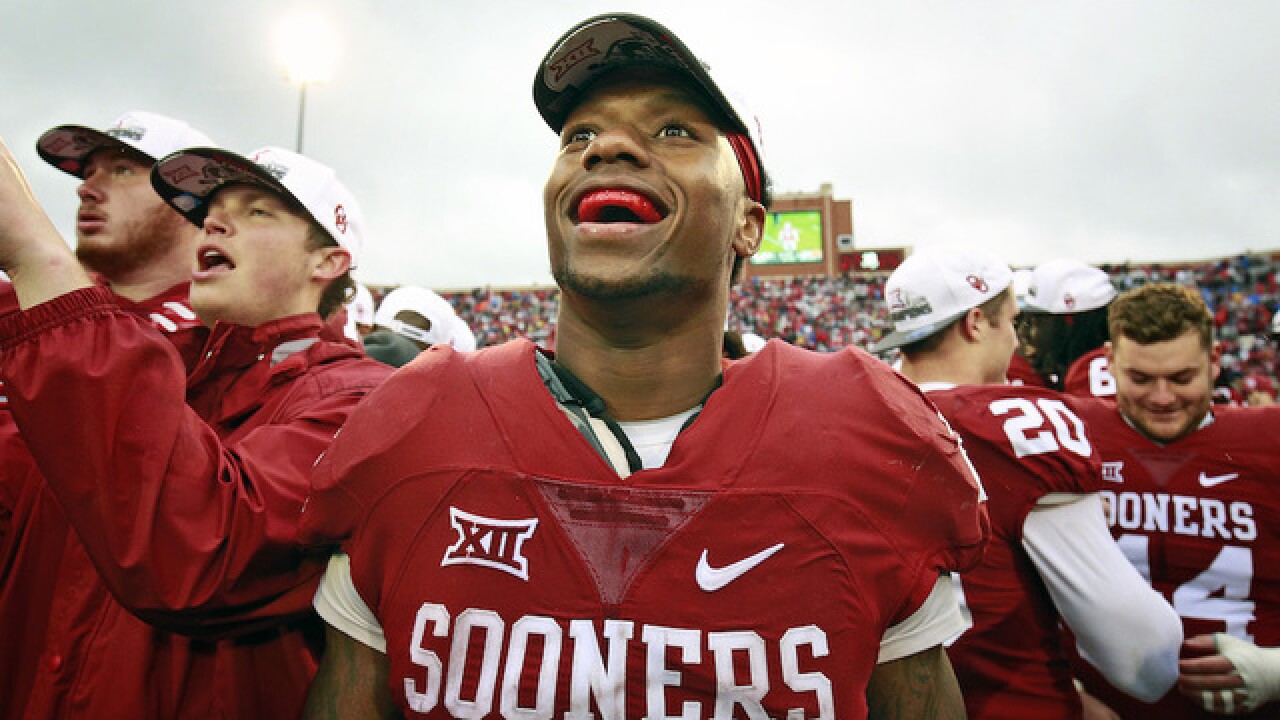 Brett Deering
<p>Running back Joe Mixon #25 of the Oklahoma Sooners walks the field after the game against the Oklahoma State Cowboys December 3, 2016 at Gaylord Family-Oklahoma Memorial Stadium in Norman, Oklahoma.</p>

OKLAHOMA CITY (AP) — A video showing Oklahoma running back Joe Mixon punching a female student was released to The Associated Press on Friday.

The Oklahoma Supreme Court ordered the release last week of a video that the Oklahoma Association of Broadcasters sued to obtain.

The Associated Press acquired videos showing two angles of the incident. One, which shows the altercation, is the video the OAB sued for. The other shows another angle of the incident.

The video shows Amelia Molitor shove Mixon, and the football player feint at her. She then slapped both sides of his neck before he floored her with a right hand to the face. She remained on the floor for several minutes.

"Mr. Mixon asked us to once again say he is sorry for the way he acted that night," a statement through his attorneys said. "He has publicly apologized to Ms. Molitor, her friends, his family, teammates, and the University. He hopes that his voluntary release of these recordings will help put this matter to rest."

On the day of the Oklahoma Supreme Court ruling, the school said in a statement the order did not change its stance.

"The university was aware of the content of the video prior to taking action with respect to Joe Mixon," the statement from the University of Oklahoma said. "Based on that information, the university suspended and removed Mixon from the football team for one year, during which high standards of conduct were expected and maintained. Joe has apologized for his actions and the university hopes that it is an indication that he has learned from his mistakes. We are an educational institution where we hope young people will learn from their mistakes and chart a better future course."

Mixon pleaded guilty to assault after the incident in July 2014 and was suspended for his freshman season. Molitor sustained multiple injuries, including a broken jaw and cheekbone. Mixon did not serve jail time and was ordered to perform 100 hours of community service.

Last year, he returned and helped the Sooners reach the College Football Playoff. He did not address the incident at the Orange Bowl media day last January in his first media availability.

Last month, after a judge dismissed two-thirds of a lawsuit brought by the woman. Mixon issued an apology through The Oklahoman.

A surveillance video of the incident at a Norman restaurant was not released during the criminal portion of the assault case. Media outlets sued to have it released, but a Cleveland County judge ruled in May that it remain sealed. The Oklahoma Association of Broadcasters appealed, and the Supreme Court justices found the video was part of the court record and therefore subject to public release.

Oklahoma will play Auburn in the Sugar Bowl on Jan. 2 in what is expected to be Mixon's final game at the school before he enters the NFL draft.